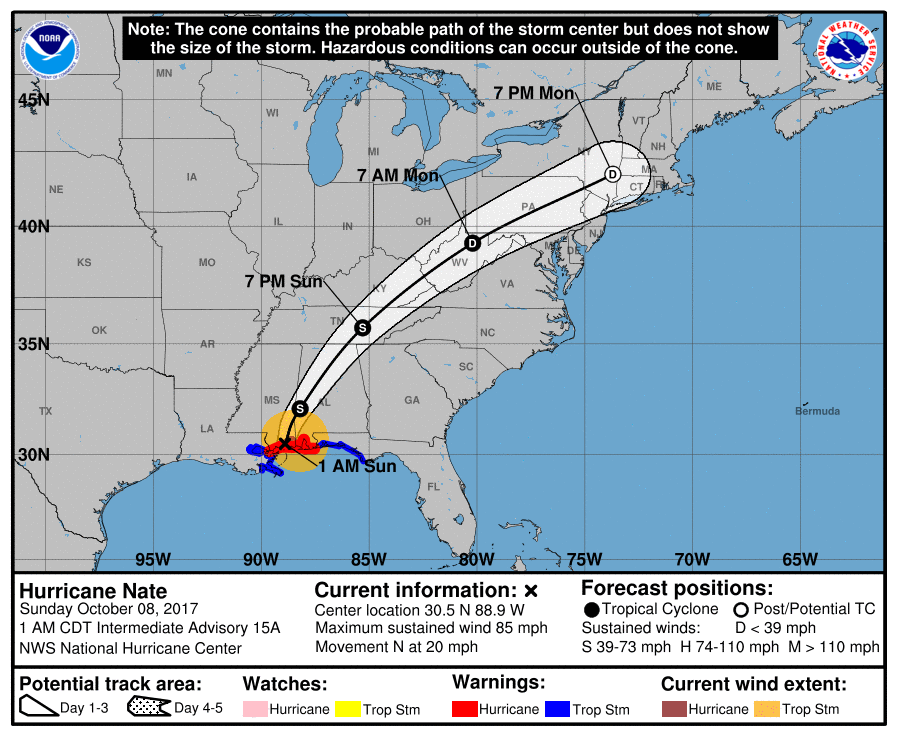 Hurricane Nate came ashore in Mississippi late Saturday night and early Sunday morning. Although this storm did not pack the strong winds or very heavy rains of recent hurricanes in the Gulf of Mexico or Caribbean, all such storms are dangerous and require the utmost respect in terms of putting safety first (particularly with respect to flooding from this point forward). Where birders can safely observe at large inland water bodies in eastern Mississippi, central and northern Alabama, eastern Tennessee and Kentucky, and areas farther north and east from the northern Appalachians to southern New England, entrained and displaced birds are possible. Given the short period from formation to intensification to landfall, the high speed of the system’s passage, and its area of origin, a representative diversity of some near shore Gulf of Mexico pelagic birds is likely with this storm and may include Brown Pelican, Magnificent Frigatebird (including far to the north and east of Nate’s landfall), and subtropical terns. As with previous discussions about these systems, species that migrate at high altitudes, presumably, overland like Pomarine Jaeger and Red-necked and Red Phalaropes, will also be associated with the passage of this system.

See live storm sightings here. Note that a number of species represented on the map may be and are being observed regularly in this coverage area, so use caution the interpreting cyclone-displaced or -entrained patterns: