Migration Update: 26-27 September 2016: Mortality at and near the Sewanee Memorial War Cross

Team BirdCast would like to highlight one of the more unfortunate aspects of the study of nocturnal bird migration. Bird mortality at and near areas of strong artificial illumination has been well documented at numerous locations around the world with the spread of electricity and associated technologies since the mid to late 19th century. We call your attention to a recent mortality event on the night of 26-27 September 2016 in and around the Sewanee Memorial War Cross in Tennessee. This location is on the Cumberland Plateau, atop a bluff surrounded by forest and visible for at least several miles’ distance from the valley below.

Approximately 130 birds were killed at the memorial cross site, with some of the specimens clearly visible in the image below taken by Sandy Gilliam at the site (note, these birds were recovered and organized into this position before being frozen for later study).  Dr. David Haskell describes the scene on his blog. Additional reports from several nearby locations suggest at least as many birds were also killed at or near other lighted structures; and preliminary necropsies suggest many birds from at least one of these other locations died, as would be expected, from trauma indicative of colliding with a structure. 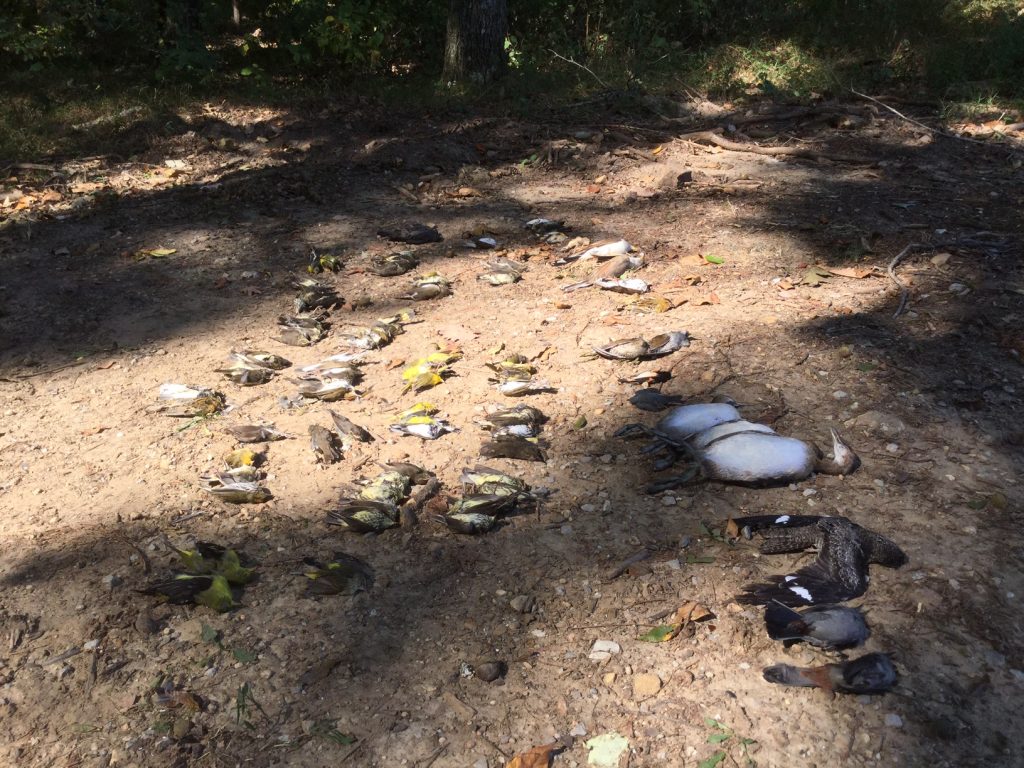 Thank you to David for calling our attention to this, and special thanks to Nate Wilson, Sandy Gilliam, Greg Rollins, William Shealey, and colleagues for such rapid and proactive response. Additionally, we are heartened to learn that Environmental Stewardship & Sustainability and Physical Plant Services at the University of the South are developing a plan to rework lighting of the memorial to avoid future kills during bird migration. This planning includes the immediate replacement of much less intense bulbs to light the structure (completed the day following this event).

Mortality events like this one in Tennessee highlight a significant hazard for nocturnally migrating birds: artificial light. In this event, as is true for a number of other previously published instances of bird kills, artificial light in combination with low cloud ceiling and poor visibility conditions appear to be the culprits – a deadly combination. Preventing this type of mortality could be very simple – turning off lights at night during periods of moderate to heavy migration, particularly when nocturnally migrating birds may experience poor visibility conditions and low cloud ceilings. Even short-term shut downs, for example as occur at the Tribute in Light Memorial in New York City, could make a significant difference!