Light to moderate movements begin across the country this week, punctuated with some heavier movements in the Great Plains, in particular, as large numbers of waterbirds depart their winter haunts. Species on the move this week will include Turkey Vulture, Killdeer, Barn Swallow, American Robin, Red-winged Blackbird, and Song Sparrow.

Arrows show wind speed and direction 100 m above ground level. Areas with southerly winds are colored red; northerly winds colored blue. Accumulated precipitation (in 6 hour intervals) is green, outlined by white. Broadly speaking, areas of the map in red will experience conditions that are favorable for migration, and areas where red and green intersect and overlap may experience migrant concentrations and fallouts as migrants interact with precipitation.

Marginal to favorable conditions for light to moderate migration are in place to begin the weekend in portions of the Pacific Northwest and northern Rockies, whereas less favorable conditions are widespread farther South and East. Favorable conditions for such movements push South and East over the course of the weekend. But increasing likelihood of precipitation in the Great Basin and northern Rockies may cause local fallouts (particularly early waterfowl and swallows on and over inland bodies of water). By Tuesday much of the region will experience light migration, with slightly heavier movements in portions of the Desert Southwest. A similar pattern begins anew in the middle of the week, with a new pulse of light to moderate movements in the Pacific Northwest by Wednesday night, in the Great Basin and central Rockies by Thursday night, and in the Desert Southwest and central and eastern Rockies to end the week. Movements in the eastern Rockies may be heavier than anticipated in the early and midweek periods, as increasing temperatures may make conditions more favorable than expected. Species on the move this week will include Bufflehead, Surf Scoter, Hooded Merganser, Turkey Vulture, Red-tailed Hawk, Barn and Violet-green Swallows, Orange-crowned and Yellow-rumped Warblers, Golden-crowned Sparrow, and Red-winged Blackbird. 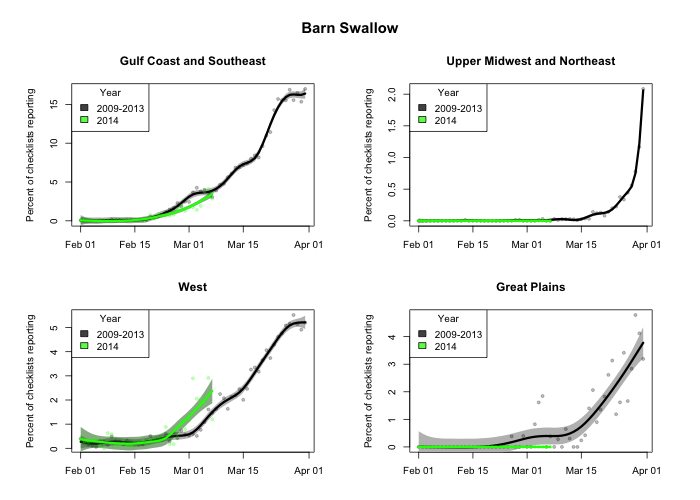 Barn Swallows are already increasing in number in the Gulf Coast/Southeast and West regions, and will begin appearing shortly in the rest of the country.

The southern Plains experience light to moderate movements to begin the weekend, but favorable conditions disappear to the North and West of central and eastern Kansas. These southern Plains movements should include good waterbird flights, as temperature increases in these areas coupled with favorable winds will spawn such flights. By Saturday and Sunday nights, however, the northern and central Plains will experience these movements as southerly flow moves across the region. Much of the region south of the Dakotas will participate in the light to moderate movements to begin the week, as conditions will be favorable in many areas. This night may be an excellent night for waterbird movements that will continue into the following morning, as warmer temperatures spread across the southern Plains. After this pulse of movements, northerly flow returns for the middle of the week, keeping most movements light. And to end the period, another wash of southerly flow in the central and southern Plains will facilitate light to moderate movements in those areas. Species on the move this week will include Blue-winged and Green-winged Teal, Gadwall and Northern Pintail, Turkey Vulture, Red-tailed Hawk, Sandhill Crane, Killdeer, Ring-billed Gull, Eastern Phoebe, Red-winged Blackbird, Common Grackle, and Western Meadowlark. 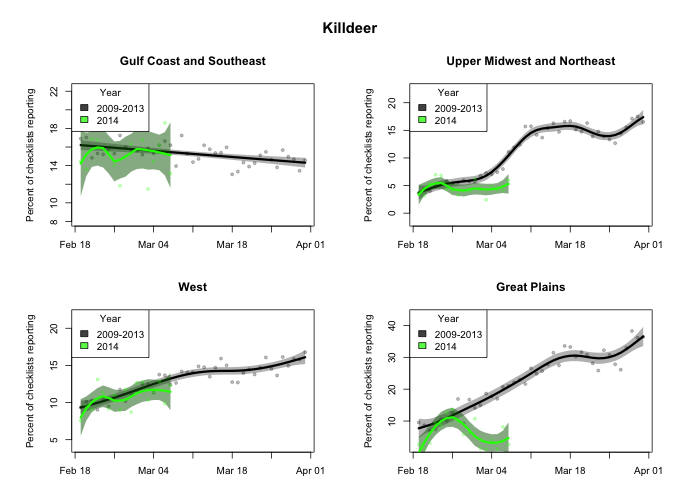 Killdeers will be steadily increasing in many parts of the US during the forecast period. They appear to be lagging behind normal pace in the Upper Midwest/Northeast and Great Plains regions, likely due to continuing cold weather.

Marginal to favorable winds will facilitate some light movements across portions of the Mississippi River valley North and East through New England, but cold temperatures will keep most early migrants grounded. However, warming temperatures in portions of the Ohio River valley East to the Atlantic may spawn more and heavier movements than expected early in the weekend, particularly early waterfowl flights. Sunday and Monday nights see a similar incursion of warmer temperatures in the Midwest coinciding with a pulse of strong southerly flow; this will facilitate light to moderate movements in many areas West of the Appalachians. Most of the region will experience limited movements on Tuesday and Wednesday as northerly flow and cooler temperatures prevail. Another pulse of light to moderate migration will occur on Thursday night, with favorable conditions from the upper and central Mississippi River valley East through the Great Lakes. The end of the period sees the first big pulse of favorable conditions East of the Great Lakes and Appalachians, and widespread light to moderate movements will occur in many areas from the central Mississippi River valley East and North. Species on the move this week will include Green-winged Teal, Wood Duck, Bufflehead, Horned Grebe, Great Blue Heron, Osprey, Sandhill Crane, Eastern Phoebe, Tree Swallow, American Robin, Pine Warbler, Eastern Meadowlark, Red-winged and Rusty Blackbirds, Common Grackle, Brown-headed Cowbird, and Fox and Song Sparrows. 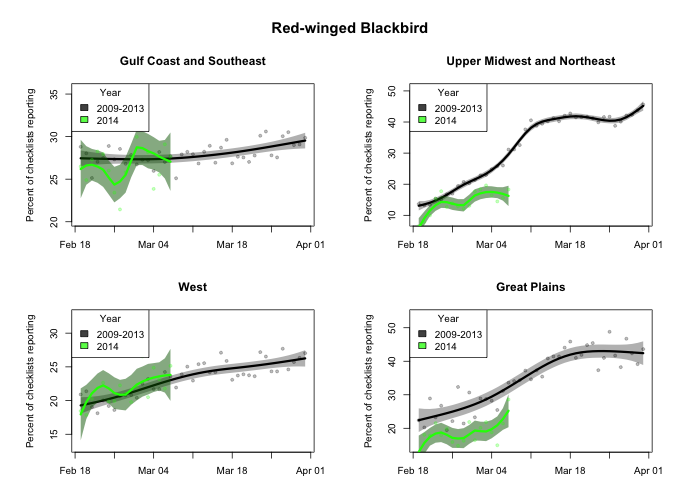 Red-winged Blackbirds are on the increase in most areas, although the pattern of lateness due to cold in certain areas appears to hold true for this species as well.

Many areas West of the Mississippi River will experience favorable conditions for moderate movements to begin the weekend. These conditions slowly spread East through the weekend. Birders in Texas should watch the coast closely on Sunday and Monday, as favorable conditions will deteriorate into unfavorable conditions with precipitation, making early migrant fallouts a possibility. Although it is early in the season for high diversity fallouts, birding in these coastal habitats may be productive after the wind shifts and precipitation falls. More favorable conditions return to much of the region by Monday and Tuesday nights, especially as warmer temperatures spread East. By midweek conditions favorable for migrant arrivals and departures are limited to Florida North to the Carolinas; and birders in these areas should watch carefully for fallouts of early migrants where precipitation and migrants interact. Thursday night sees much of the region very quiet for migration, with light to moderate movements returning in many areas away from the immediate Gulf Coast and Florida Peninsula by Friday night. Species on the move this week will include Blue-winged Teal, Turkey Vulture, Laughing Gull, Purple Martin, Tree, Cliff, and Barn Swallows, American Robin, Blue-gray Gnatcatcher, Northern Parula, Black-and-white, Yellow-rumped, Pine, and Palm Warblers, and White-throated and Song Sparrows.