Updated, 2300 ET, 3 August 2020. Hurricane Isaias has arrived at the Carolina coast, and now the storm is forecast to move rapidly overland in the coming 72 hours. 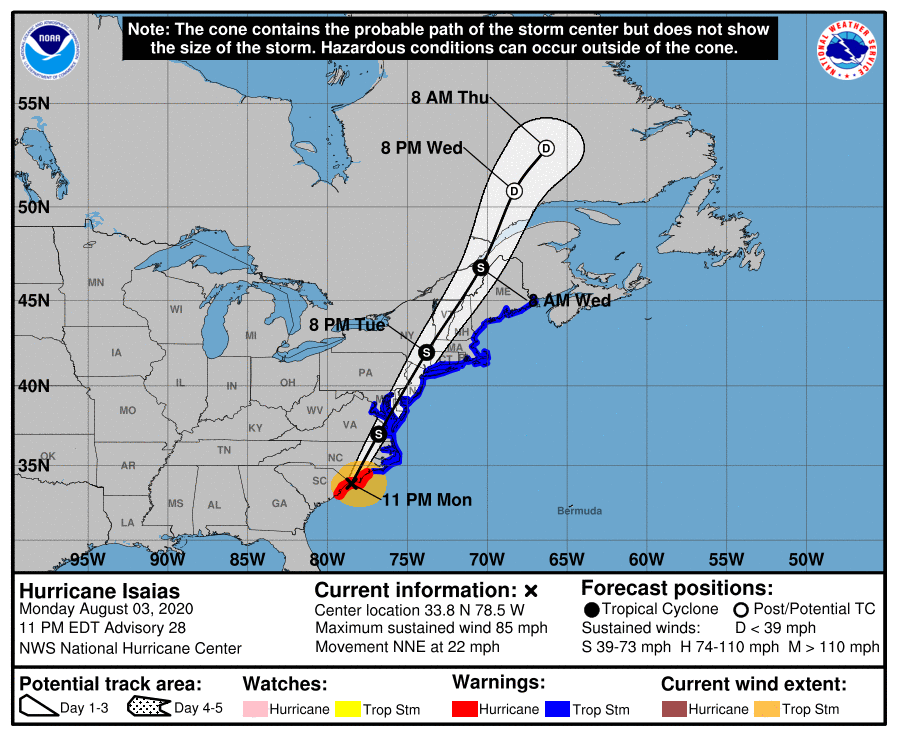 For those that can safely observe during and just after the passage of this system, inland bodies of water (lakes, reservoirs) and riverine systems (Hudson, Delaware, Connecticut) from eastern North Carolina to the mid Hudson Valley of New York and northern New England and possibly the St. Lawrence River could hold an array of species entrained by Isaias. Coastal areas from the Outer Banks north to Cape May, NJ and southern New England could also experience the avian fallout from the storm in the form of displaced nearshore species. As thunderstorms embedded in the system pass, overland migrant shorebirds and waterbirds may fallout. And observers should keep keen eyes to the skies for aerial insectivores like swifts (e.g. Black Swift), swallows, and martins (the potential is amazing, the reality more often than not, not so much …).

See live sightings of species we expect may be displaced by Isaias here. (If you get a “disconnected” message, click “Reload”.) Not all observations may be directly related to the storm (e.g. Royal Tern in many immediately coastal areas of the southeast).

Updated 2230 ET, 2 August 2020. With winds and rain already lashing portions of the southeastern US, Hurricane Isaias is forecast to make landfall early Tuesday morning in the Carolinas. The storm will then decrease in intensity and quickly move north and east, in southern New England 24 hours later, and in the Canadian Maritimes a further 24 hours later.

The speed of the storm suggests reasonable coastal and inland deposits of pelagic and some near shore birds for observers that can safely observe, both from the perspective of the storm’s dangerous conditions and the current pandemic’s dangerous conditions. The initial deposit of pelagic species certainly will be much more likely in the hours just after landfall, especially in eastern North Carolina and Virginia. This storm now has quite the similar track to Hurricane Bertha in 1996, and the amazing avian aftermath of that storm is well characterized by our friend Ned Brinkley here. A thorough reading of the observers’ accounts from Bertha highlights numerous potential locations for observation, the greatest avian windfalls were in those areas closest to initial landfall. Note, however, that storm was stronger on landfall and had significantly more time over deeper waters – with Isaias have a more coastal and less Gulf Stream flavor, a bit more Dorian (see below) than Bertha? Also worth noting, Black Swift was associated with this passage of this system as well, far north of landfall, in Massachusetts; so observers throughout the eastern seaboard, especially from North Carolina through the Canadian maritimes, should be aware of this possibility. 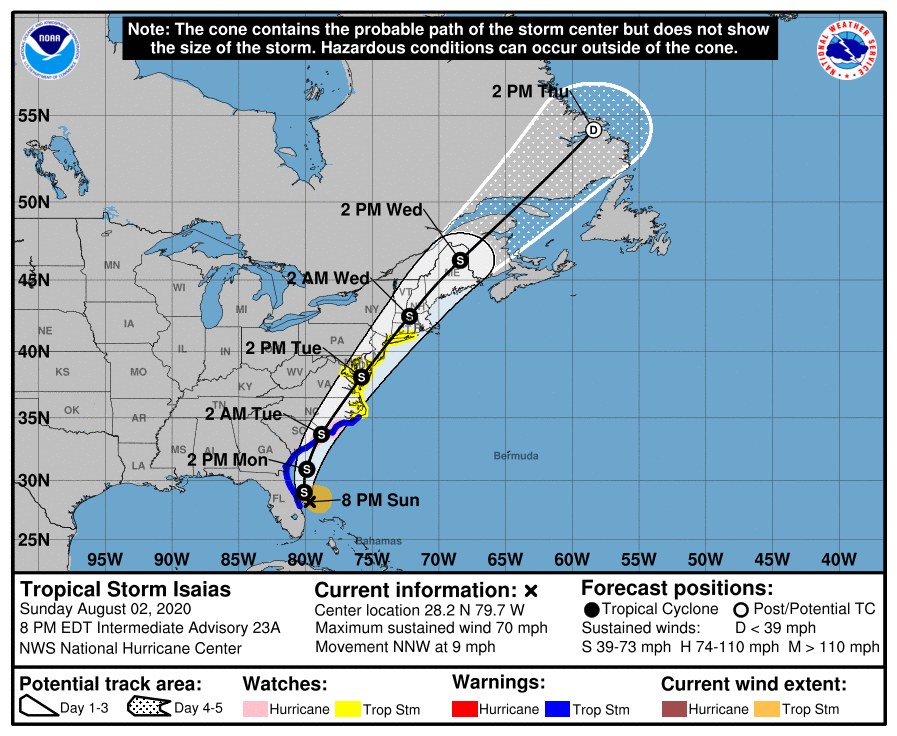 Original post: Hurricane Isaias is forecast to make landfall in the US on the Carolina coast after grazing the Florida Peninsula and passing directly over the Bahamas and nearby islands. This storm will likely produce hazardous conditions where it passes, including damaging winds, dangerous storm surges, and torrential rains with flooding. Safety in the path and wake of this storm is of the utmost importance, particular in this time of public health emergencies throughout the region. 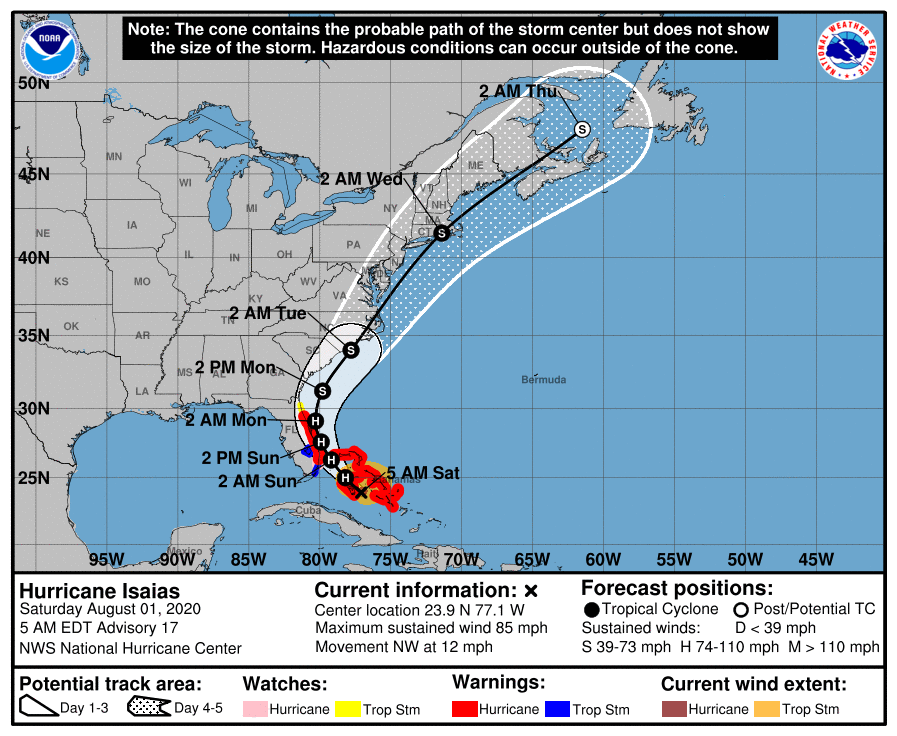 For those able to move safely in a physically distanced and protected manner, particularly in coastal areas of North Carolina, eastern Virginia and DelMarVa, portions of coastal New Jersey and eastern Long Island, and coastal southern New England, the passage of this system could presumably bring the typical array of tropical terns (e.g. our favorite aerialist Sooty Tern), Magnificent Frigatebird, and a number of Gulf Stream seabirds including Black-capped Petrel (and perhaps rare Pterodroma petrels, although the storm may be too coastal in nature and not sufficiently far enough offshore to entrain many of any members of this genus) and Band-rumped Storm-Petrel ashore and inland. Whether an array of near shore species (e.g. Royal and Sandwich Terns, Laughing Gull) will be displaced and entrained is an open question! We will post updated species lists as the forecast track becomes clearer in the coming days.

Hurricane Dorian, a very strong storm that followed a path that was similar albeit offshore, brought a number of coastal and near shore species far afield into Canada, such as Gull-billed Tern, Black Skimmer, and Royal Tern. That storm was a full month later, with a number of species presumably dispersing and migrating at that point; will we see a similar pattern for these species with Isaias?

Hurricane Irene was followed a similar path to that predicted for Isaias after making landfall, but this storm spent time significantly farther offshore of the Florida Peninsula and Carolinas before making landfall – an example of some of its windfall is here. (Note, Black Swift is included in this array of entrained species, and observers should watch carefully for this and other large swift species.) A more complete account of that storm is here.