In some of our scientific discussion posts during spring migration 2018, the BirdCast team will highlight possible relationships between bird migration and weather that could explain why our migration models predict migration in certain areas and not in others. Let’s take a quick look at the migration forecast for the night of 28-29 March 2018 as an example: the model is predicting low to medium intensity migration in the Gulf Coast and Southeast BirdCast region this evening. Let’s also take a quick look at the weather forecast, which is predicting precipitation in portions of the south central US.

In the image below our model is predicting low to medium intensity movements from southern Texas to Florida and north and east into the southern Appalachians and mid Atlantic states. Moderate to heavy precipitation is also forecast, from northeast Texas through the Ozarks and into the central Mississippi River Valley; this will shut down movements in these areas. But where migration is forecast, what are some of the attributes of the atmosphere where birds are predicted to be flying that might explain why migration is forecast to occur? 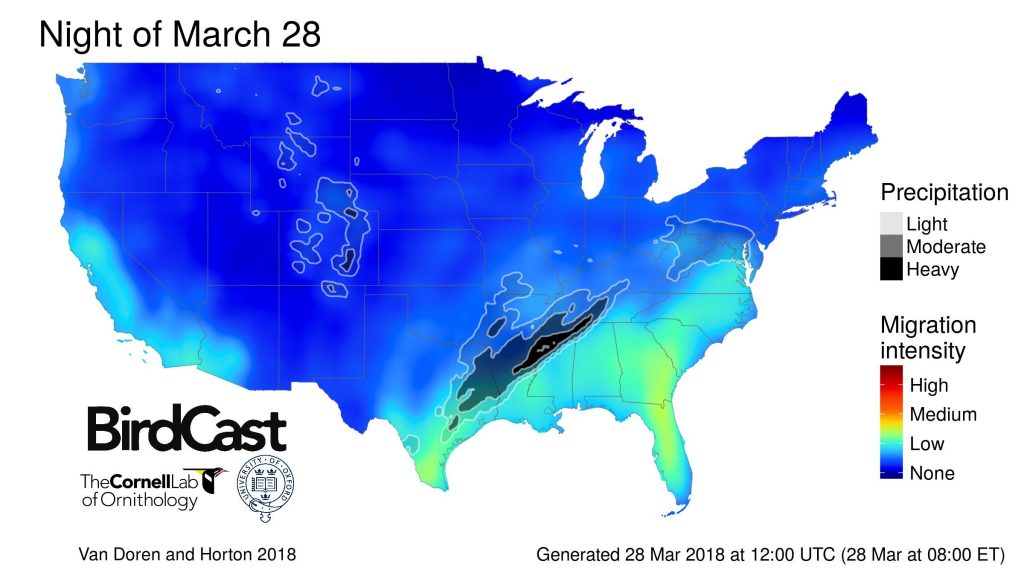 The image below shows the short term forecast, effectively close to sunset Eastern time, for the locations of high and low pressure centers, precipitation, and frontal boundaries between air masses. Recall from the migration forecast that the distribution of predicted medium migration intensities in the southeastern US correspond to an area between a high pressure center north of the Bahamas (the blue “H”) and a stationary front (the alternating blue triangles and red half circles) from Texas to the western foothills of the Appalachians. In this area, light southerly winds and warm moist air are likely, facilitating movements of early migrants. Note, also, that although there are forecast light winds farther north and east into the Ohio River Valley, the eastern Great Lakes, and New England, our models do not predict much migration in these areas. Warm and moist air associated with the air mass defined by this stationary front has yet to arrive in these areas, but when it does (see the forecast for the following night!), migrants will follow!

Note that our migration forecast model is also predicting low intensity movements in California and the Desert Southwest. In these areas light winds, warm temperatures, and clear skies associated with weak low pressure centers in California and the Desert Southwest will facilitate low intensity migration over this part of the country.

Stay tuned to the live migration map this evening to see what happens along the Gulf Coast, in the Appalachians, and in the Desert Southwest!