Species on the move (or soon to be): American Robin

American Robin is a sure sign of spring for many, whether you wait patiently for the first migrants to scamper across a lawn that is (finally) not icy or white (can you tell that parts of the eastern US are very ready for spring?) or eagerly anticipate the rambling and melodic caroling of a robin in your back yard. 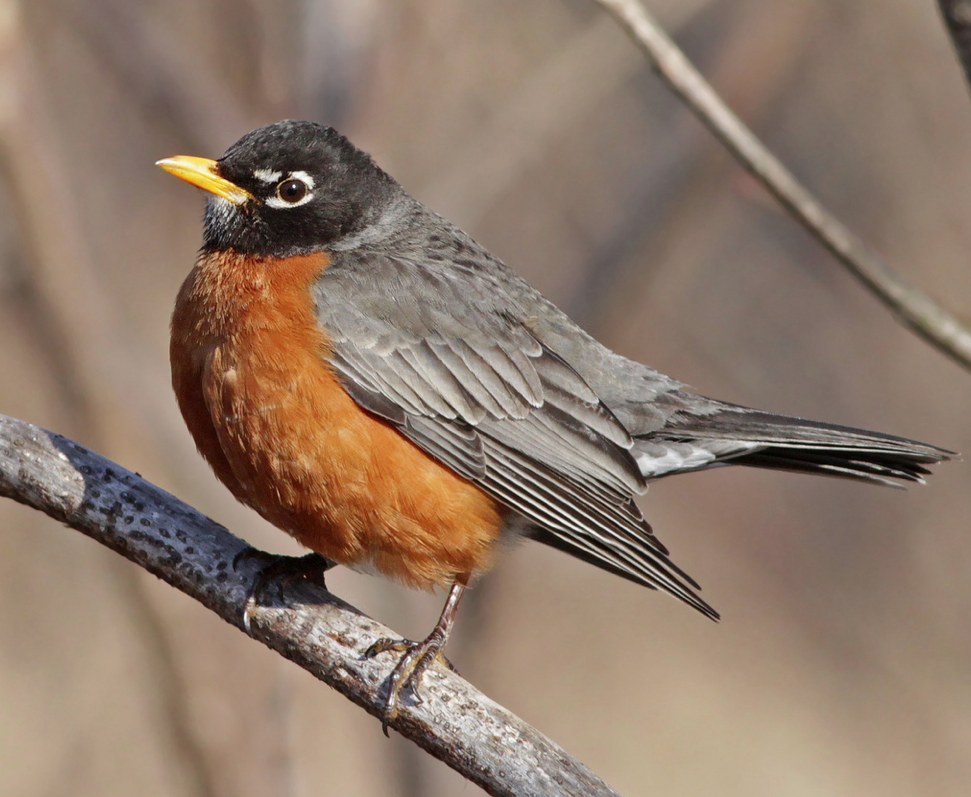 In the past days, robins have been on the move in some locations but not on the move and decidedly absent in other locations. With a watchful eye (and wandering mind) for patterns, this week’s entry for BirdCast’s species on the move feature showcases some recent robin movements.

The figures below show daily changes in the frequency of occurrence (with 95% confidence intervals) for American Robin as recorded from complete checklists submitted to eBird from 1 November to 31 March. Start year in each figure’s legend is 1 November of that year, tracking the changes in occurrence forward through the new year (for example, a start year of 2014 begins on 1 November 2014 and continues to present, 2015). In the figure that follows directly, notice that Fall 2014-Winter 2015 (the purple line) occurrences for American Robin in Massachusetts are close to the 1990-2014 mean frequencies of occurrence, and higher than the mean in late fall 2014. But, when March rolls around, they dip below the 1990-2014 mean and below the early March frequencies of the previous four “springs.” 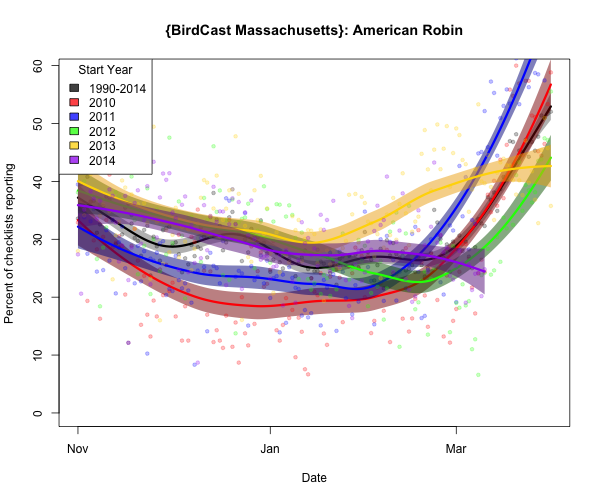 A similar pattern holds true for New York state, perhaps even more striking given that the 2014-2015 line sinks below the previous four years and the 1990-2014 mean beginning substantially earlier in the year, in February. 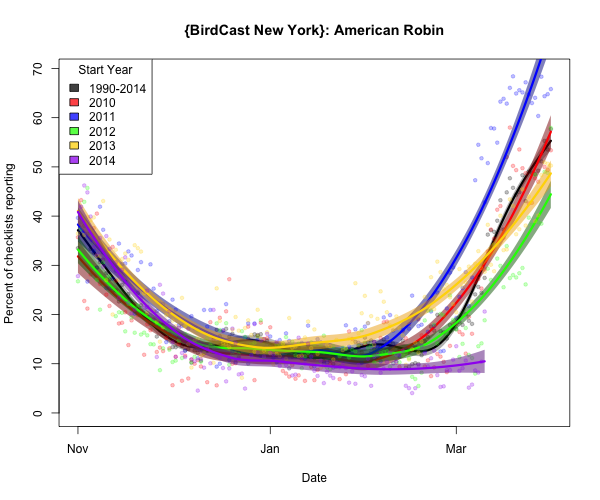 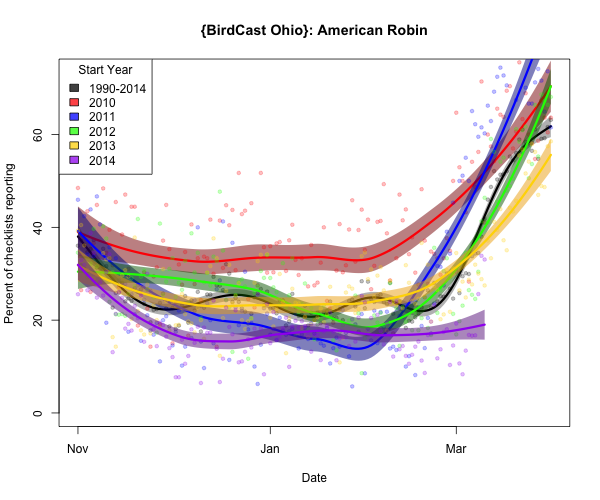 A logical question might be where are the robins? A logical answer might be farther to the south, given the pervasive cold gripping the eastern US, especially the Upper Midwest and Northeast, this winter. And the frequencies from the south . . . well, they may tell some of the story. DelMarVa frequencies of occurrence follow a very similar pattern to previous years, though a bit above average since the beginning of the year. 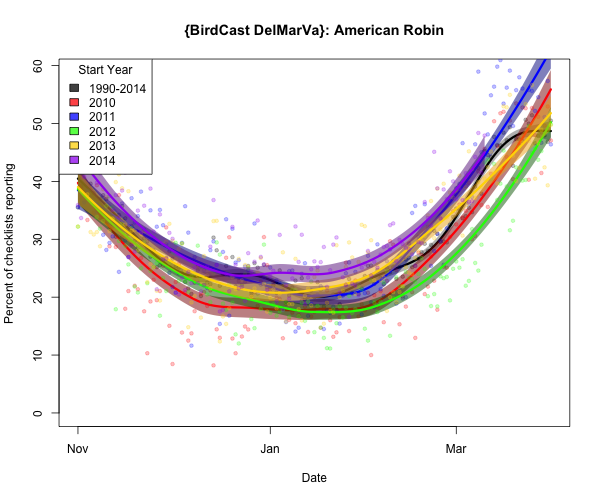 But the Georgia and Carolinas figure clearly shows a significantly higher than average frequency of robins from late February through the beginning of March. 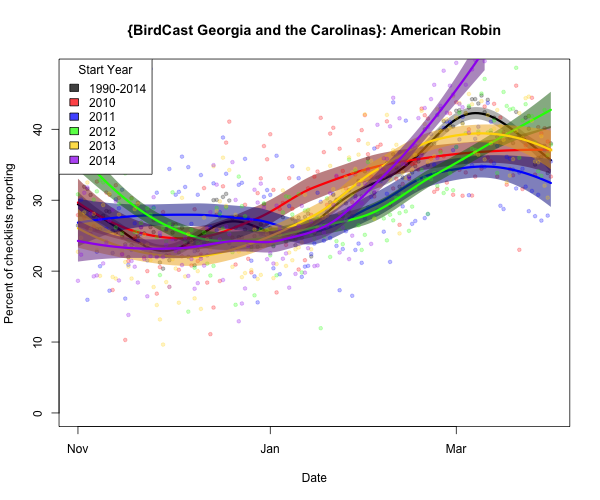 And the Texas and the Gulf Coast states’ pattern shows an increasing frequency of robins, despite being below the 1990-2014 mean and not showing quite the dramatic departure we see in the southeast, at a time of the year when the species is usually decreasing in frequency. 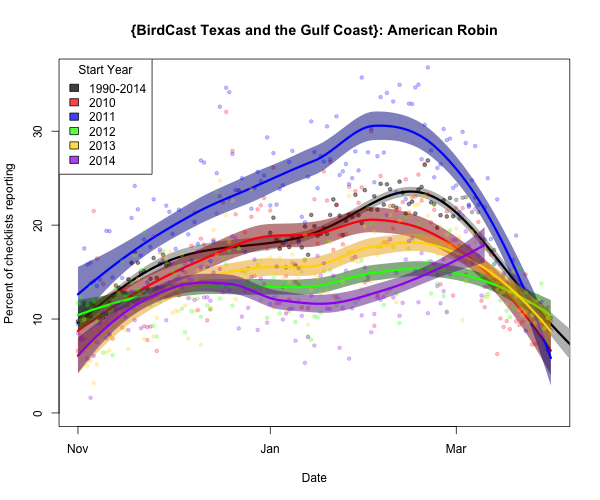 Was there an exodus from the Northeast to Georgia and the Carolinas (and other southern regions) during the extreme blasts of cold that characterized the latter half of February? The signs point to making a case for facultative migration this winter (robins on the move as a response to rapidly local changing conditions).

Of course, all of these graphics are simply frequencies of occurrence, and not counts of actual individual birds. No doubt we are missing information and signals of the pattern here without count data, so in the coming weeks we will follow this post with some updates that evaluate some of these missing data.