Species on the move: early and on-time late February movers

In the past decades birders have become increasingly aware of rapid changes in the phenology of bird movements in parts of the United States, noting what species are early, when birds are late. The power of eBird for highlighting these patterns has increased dramatically, and for the first time we can start to quantify and appreciate these changes relative to previous years in close to real time.

As the winter of 2013-2014 continues to surprise (and certainly disappoint many in the East if you don’t like cold, snow and ice!), much sought-after warming appeared on the scene, particularly in many areas of the Southeast. The departures in average temperatures for the past week stand in stark contrast to previous weeks in the below graphics. They are particularly striking when visualized across 7-, 14-, 30-, and 60-day time periods. The map below shows an animated version of these visualizations – note the shift from substantially cooler than average to substantially warmer than average in the Southeast in the most recent week of February.

This recent warm-up, beginning approximately 16 February, triggered movements of short-distance migrants. In the Northeast during the past week, birders have reported eBird observations of early Killdeer and extremely early Tree Swallows and Eastern Phoebes. Given the cycle of brutal cold snaps this winter (our friend, again, the weak Arctic Oscillation and subsequent arrival of multiple polar vortices), early appearances by migrants would not necessarily be the expectation. But the opposite phase of the cycles of cold, the warm-up, on the winter grounds apparently triggered this movement, regardless of the recent cold snaps and polar vortices. It seems likely that several recent warm springs have contributed to a propensity for early movements by a number of species that typically reach New England and upstate New York in early March. For example, eBird data for the Northeast for 2010-2014 show that four of the last five Februaries have had significant arrival events in the latter half of February.

The figure below shows the early arrival of American Robins in the Upper Midwest and Northeast BirdCast region – based on the daily changes in the numbers of complete checklists reporting the species, American Robin is presently appearing earlier in the region than in any of the recent Februaries since 2010. This species’s late winter and early spring movements are often associated with rapid onset of warming conditions in the Southeast. Presumably, these movements are very much a function of warming trends corresponding to increased likelihood of open, snow-free ground. 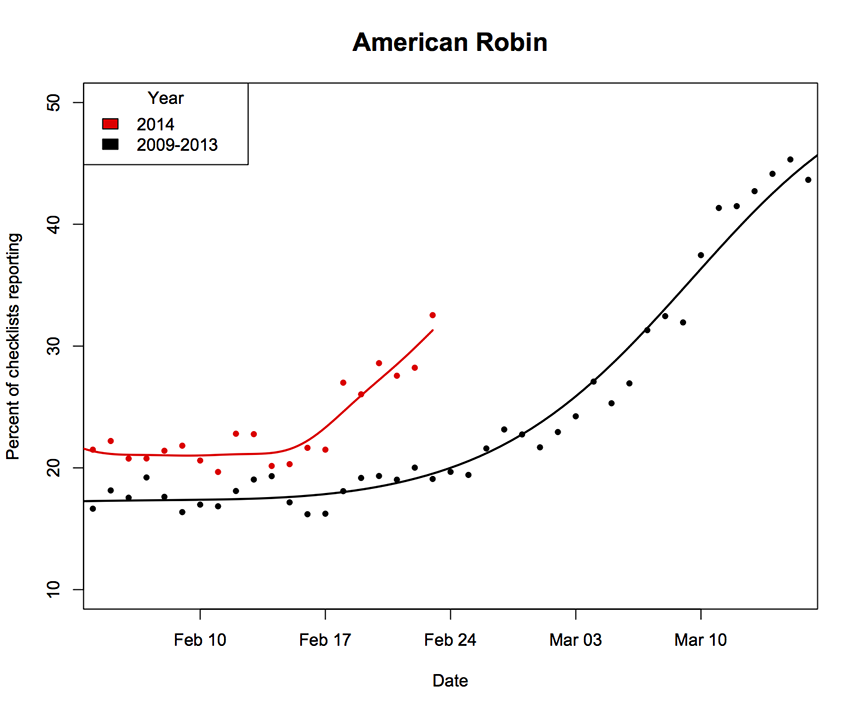 Red-winged Blackbird is usually more of an early to mid-February arriver, so if anything this year seems behind schedule. But note how the blackbirds that were backed up, plausibly by cold temperatures and storms through 15 February, seem to have quickly made up ground after the 18 February warming. 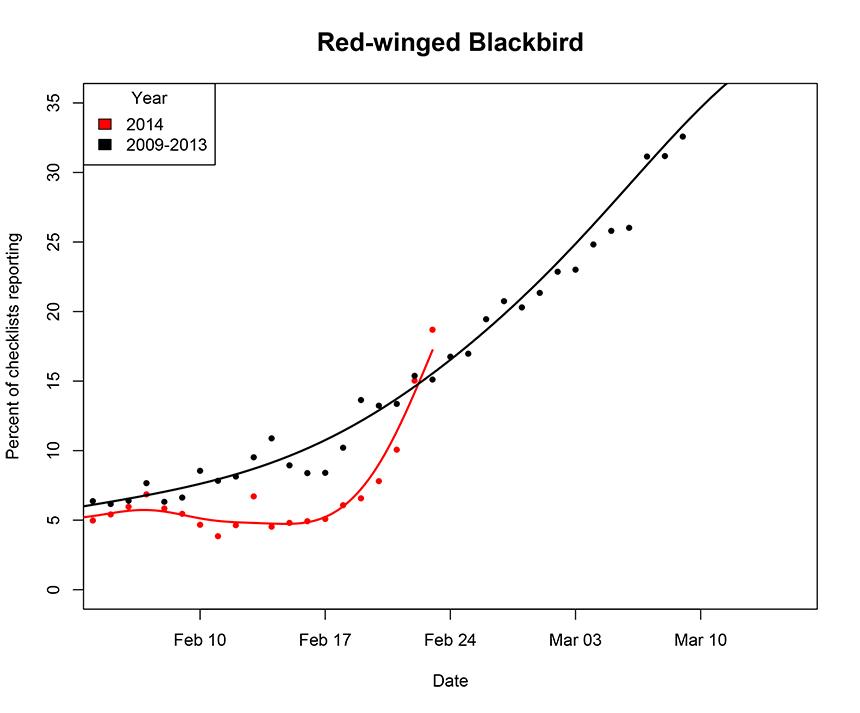 Killdeer showed lower than normal numbers through the winter, since this facultative migrant was surely hard-hit by the exceptional cold, heavy snow, and ice this winter–birds attempting to overwinter north of normal areas probably succumbed or were driven south. But as with Red-winged Blackbirds and robins, they seem to have responded to the warm snap that started on 17-18 Feb and some birds moved north just as the snows started to melt. 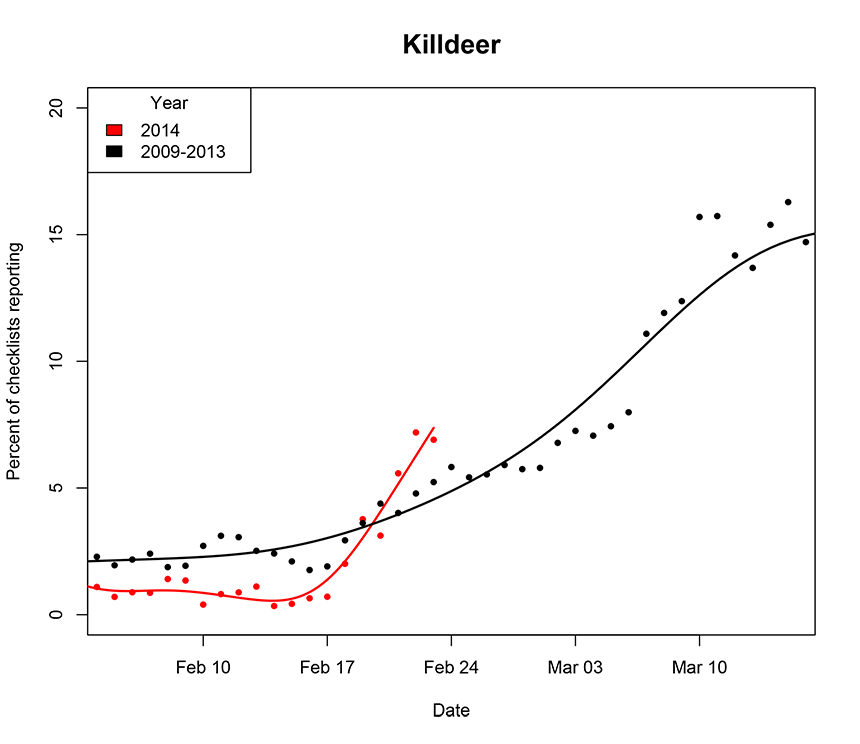 Tree Swallow was, even in the very recent past, more of a mid to late March migrant. But recent years have seen its arrival dates creep up earlier into the beginning of March. Arrivals in February are strictly a recent phenomenon and probably more prevalent already this year than ever before in the Northeast. It seems that each year this species pushes its limits a bit further; the pioneers this year will probably regret their rush to return… 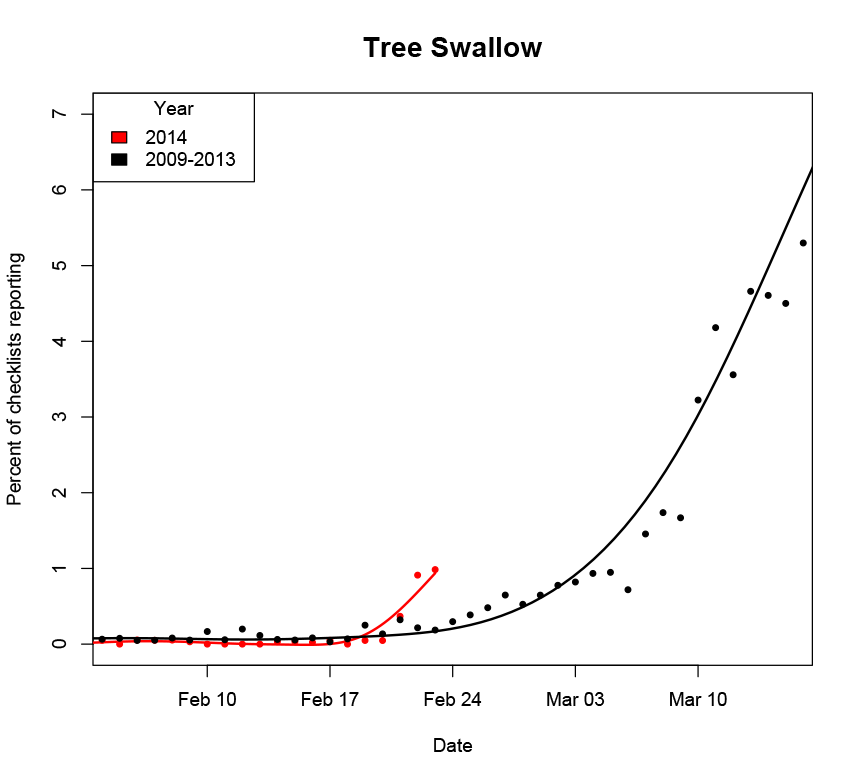 American Woodcock is typically a mid-February returnee in the mid-Atlantic states and its pattern this year does not seem to be a striking departure from normal, in contrast to the other species examined. Like Red-winged Blackbird, perhaps this one was bottled up by the extreme cold in the mid-month and is just catching up to normal now. 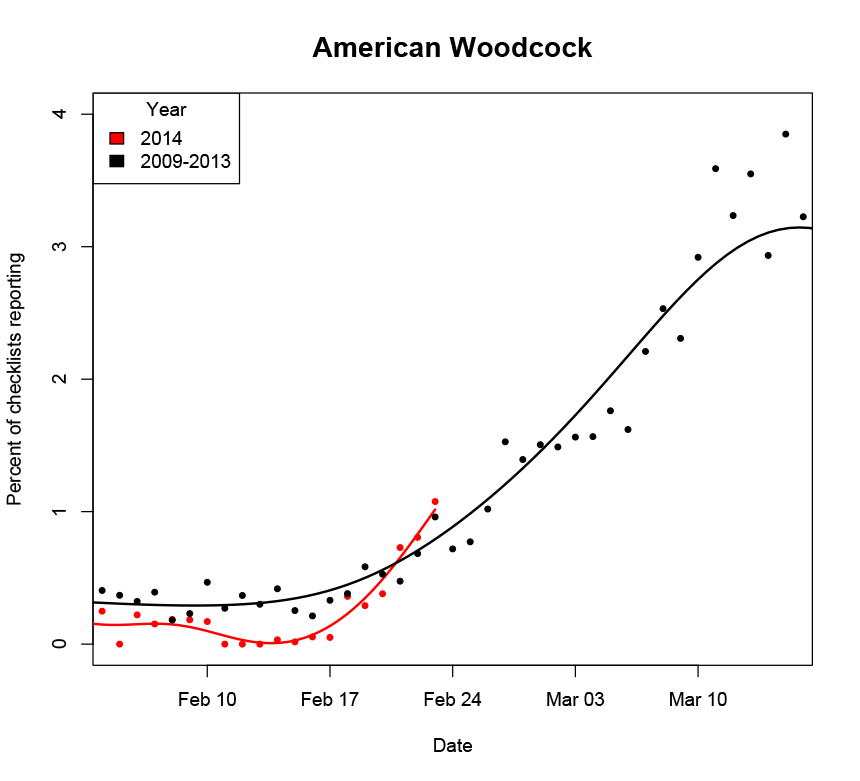 American Oystercatchers, impressively, have also been coming back early, with birds at two locations in Massachusetts well ahead of normal, plus arrivals in coastal New York. 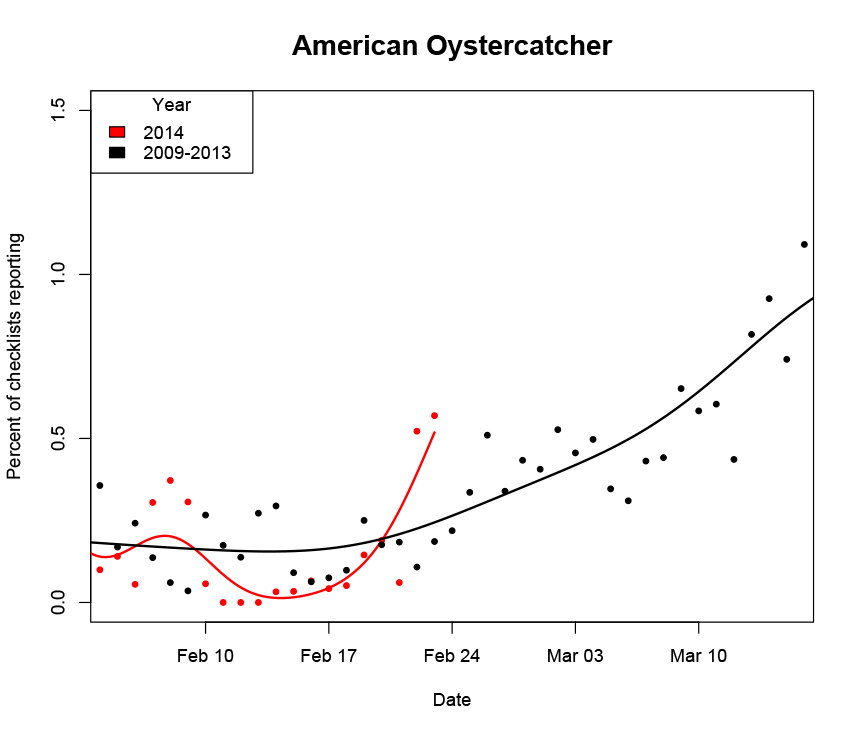 Meanwhile, duck numbers are starting to build in the Great Lakes and Northeast region as well. 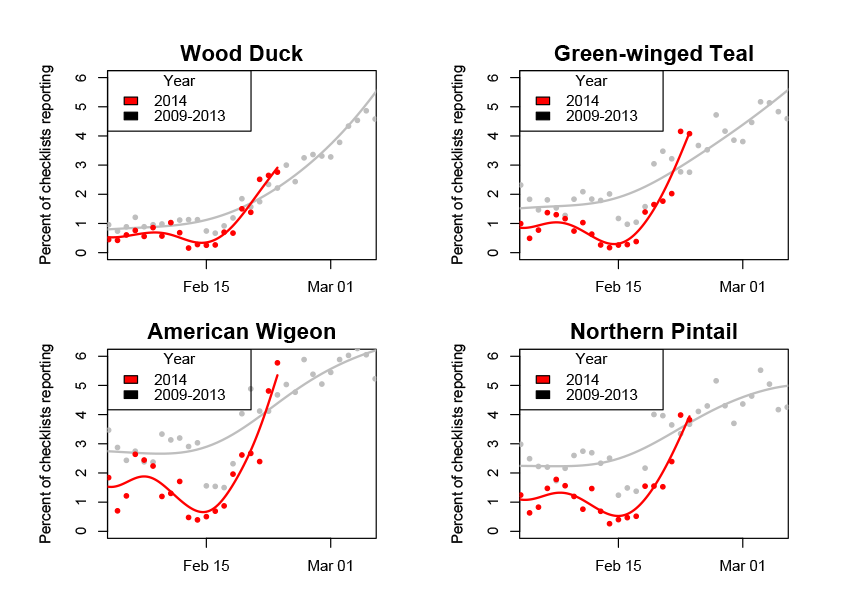 Teams BirdCast and eBird will continue to look at these patterns, particularly as weekly forecasts are soon to return to the BirdCast home page.