BirdCast is updating the previous migration alert for the Gulf Coast. This update is as of 5pm EDT 3 April 2014. Conditions are favorable for a moderate exodus of birds from Mexico and portions of northern Central America later tonight (Thursday 3 April). Note that conditions are not favorable for South American departures (will this mean few Eastern Kingbirds and other long distance South American migrants in the fallout?). 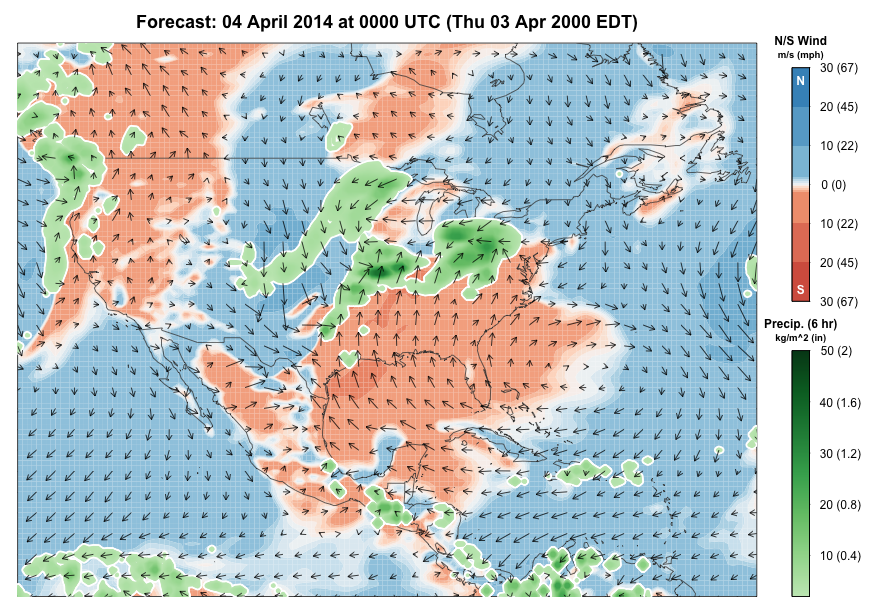 By Friday morning the frontal boundary is close to the coast, suggesting that early arriving trans-Gulf migrant waterbirds and circum-Gulf migrants may fall out along the Texas coast from Brownsville north and east to Louisiana. 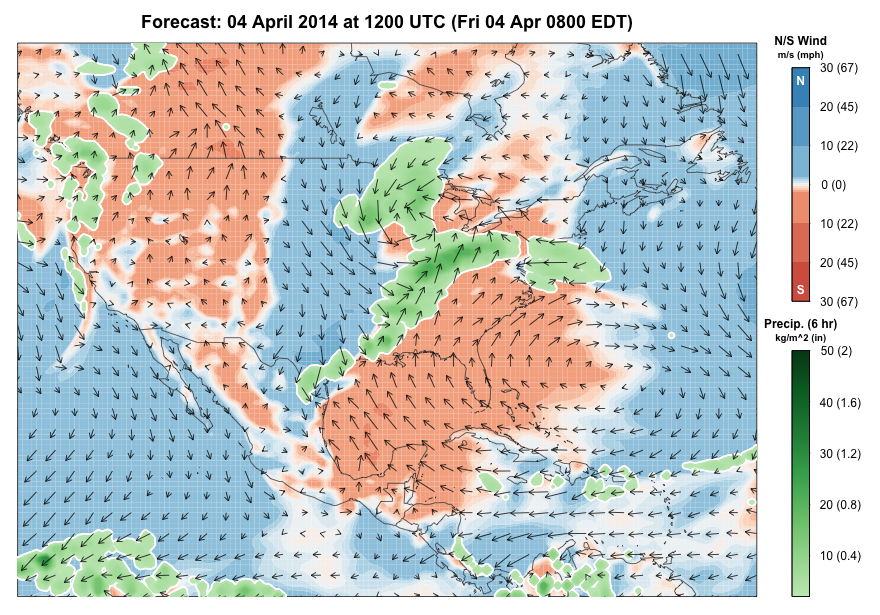 As the front moves into the Gulf, later arriving migrants, including passerines, will begin to fall out along the western Gulf Coast. These birds are individuals that departed from points south in favorable and marginal conditions on Thursday night and that will have encountered northerly and northeasterly winds and precipitation en route. These migrants will try to find the closest land area to their first contact with these adverse conditions. 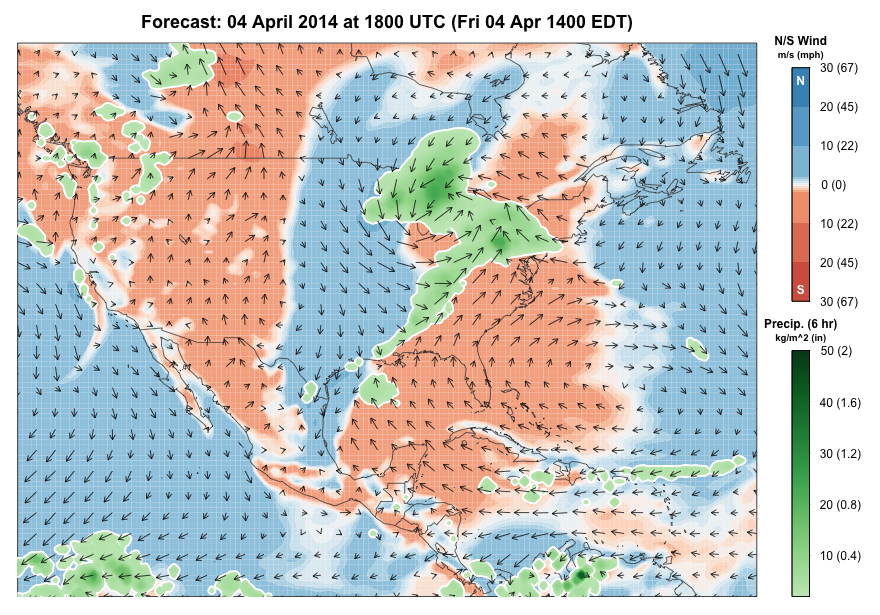 Friday night sees the cold front sitting over the northwestern Gulf of Mexico but also sees another pulse of migrants departing from Yucatan, portions of northern Central America, and the Caribbean. These departing migrants will encounter the front much as those moving on the previous night. Note that birds that arrived on the Gulf Coast are not likely to depart, given northerly flow in the wake of the cold front. 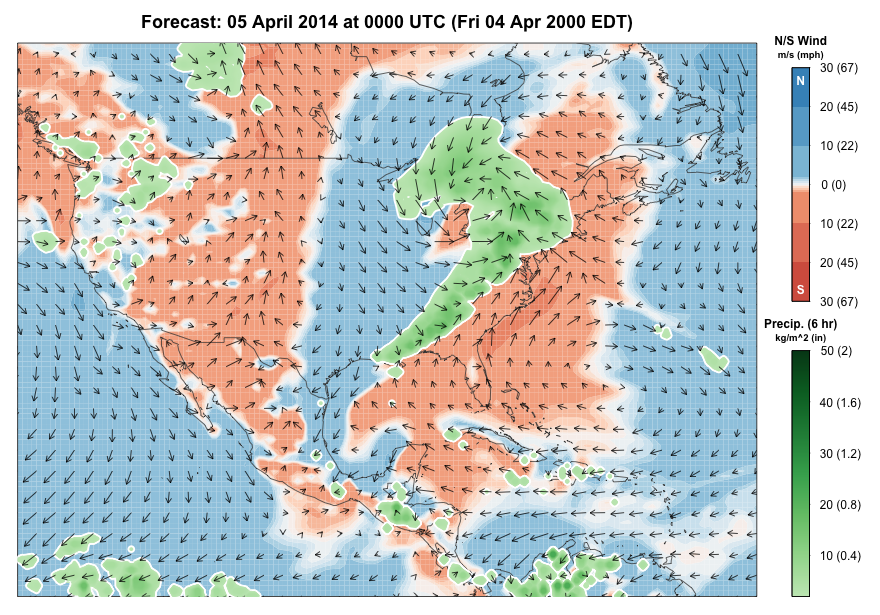 Saturday sees more migrants falling out on the Gulf coast, including more potential for fall outs farther east toward the Florida Panhandle. Saturday has the added variable that more precipitation is forecast along the frontal boundary, which by this point is sitting over the northern or central Gulf of Mexico. 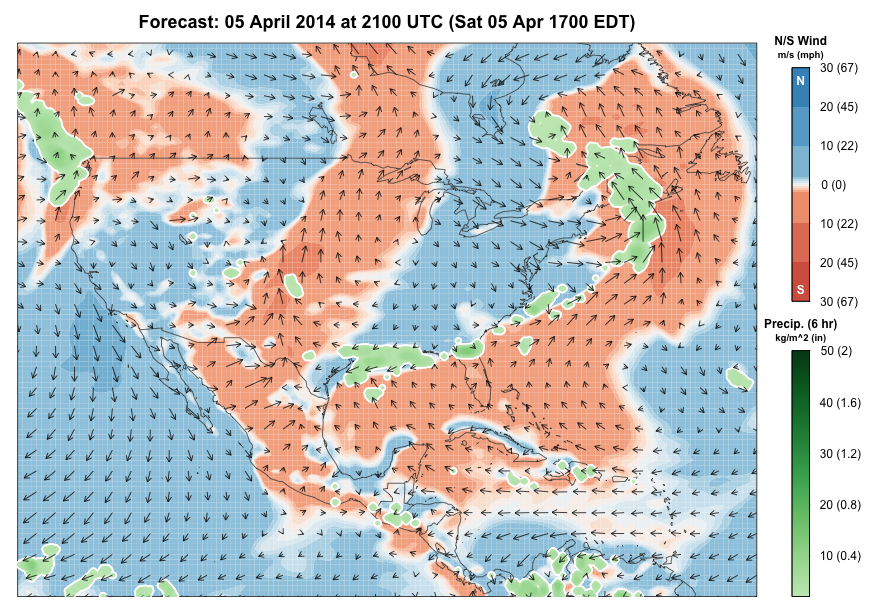 In advance of this week’s regional forecast and analysis reports on Friday, BirdCast would like to highlight the potential for fallouts in the western Gulf of Mexico beginning Friday 4 April 2014. A cold front is forecast to push past the Texas and southwest Louisiana coasts by Friday morning (local time), and given favorable conditions for trans-Gulf migration over the Gulf of Mexico, it is likely that fallouts will occur once birds encounter the frontal boundary. Winds are relatively light over the Gulf, meaning that the first fallout passerines might not occur until the second half of the day; birders should watch, however, for earlier arriving (i.e. faster flying) waterbird migrants to fallout after crossing the frontal boundary. We will update this migration alert in the coming 24-36 hours as the frontal boundary approaches the coast, and more details are clearer about the extent of rain, intensity of northerly flow behind the front, and its location relative to inbound trans-Gulf and circum-Gulf migrants.