A frontal boundary is forecast to move into the Gulf of Mexico region in the coming days, likely moving offshore and over the Gulf late on Thursday evening. The slideshow below depicts synoptic weather maps for Friday morning, Friday evening, and Saturday morning, highlighting the location of precipitation, the distribution of low and high pressure as well as lines of constant pressure (isobars), and the boundaries between air masses – i.e. frontal boundaries.

The cold front, represented by the blue line with blue triangles, will have pushed far into the Gulf of Mexico by Friday morning, making conditions for migrants in flight over water that departed from northern South America, Central America, and Mexico on Thursday evening increasingly unfavorable – these conditions are likely to include headwinds (in this case winds blowing from the west or north) and increased likelihood of precipitation and turbulence. When birds encounter these conditions over water, they alter their behaviors to avoid them and seek the closest possible onshore locations to find shelter in the form of habitat, structures, or even dunes. Large numbers of birds may come ashore exhausted, perhaps temporarily depending on the intensity and duration of the conditions, and numbers of birds may concentrate in the smallest protected patches one could imagine.

Such unfavorable over-water conditions from spring frontal passages are associated with fallouts along the Gulf coast, intense concentrations of migrants grounded and concentrated by unfavorable weather conditions. Although experiencing such fallout events in a normal year can be a rarity, requiring the perfect timing of frontal passage coinciding with migration and season and location, experiencing such an event in this year of social distance and stay at home orders may be nearly impossible for most. But … there is a perfect chance for those staying at home on the coastal plains from Texas to the Florida Keys to look skyward from your window or porch, or walk in your yard or urban courtyard (at safe distance from others!). Where and when the frontal passage occurs, in particular, in the coastal plains from Texas to the Florida Panhandle on Friday and Saturday, and even farther east on Saturday (and beyond), vegetated patches may hold large numbers of birds. By Saturday night, more favorable conditions return to the more western reaches of the Gulf of Mexico (a red line with red bubbles highlights a warm front and some return of more favorable tailwinds), many of these fallout birds may take flight over the coastal plain of Texas.

Of additional note with the passage of this weather system: many birds migrating on Thursday, Friday and Saturday nights may experience more hazards than normal because of the combination of poor visibility associated with clouds and precipitation, intense light pollution from cities during periods of intense movements. The graphic below comes from the CSU AeroEco Lab at Colorado State University from BirdCast team member Dr. Kyle Horton. Note the areas where nonessential lights should be turned off on Thursday night and early Friday morning. 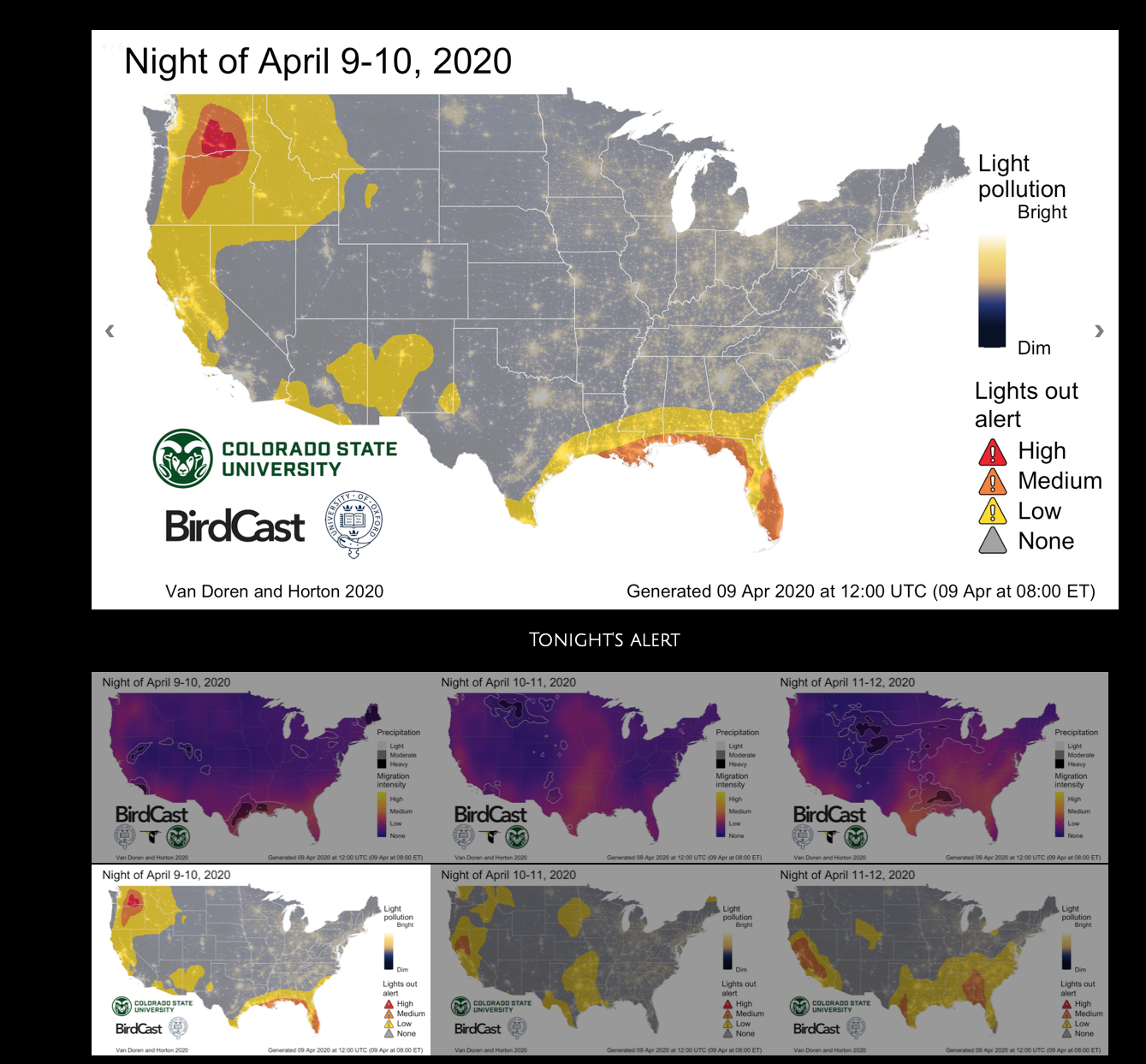 A screen shot of the CSU AeroEco Lab continental lights out alerts and migration forecasts, with a spotlight on 9-10 April 2020. The legend in the lower right explains the color scale. Note the distribution of lights out alerts along the Gulf coast. Please visit Dr. Kyle Horton’s web page by click on this image for more information.

An additional note – with the passage of this front through the Gulf of Mexico region, and a strengthening low pressure center

forming in the Great Lakes, migrants from the eastern Caribbean, Florida, and perhaps points farther south may be swept offshore with strong westerly flow in the wake of the frontal passage, creating a scenario described as a “slingshot event” or “overshoot” in which unseasonably early migrants or more typically southern species arrive in advance or farther north of expected destinations. This occurs presumably as birds swept offshore with an approaching frontal boundary and entrained in strong winds in advance of this boundary fly downwind (with the wind) until they reach a point at which they move ashore. In the imagery for the morning of 13 April 2020, we see some potential for such an event, in which case downwind means flying offshore until reaching land north of the mid Atlantic states. Were this to occur, and birds were entrained into strong southerly flow ahead of the forecast frontal boundary, overshoots could be possible in the mid-Atlantic and New England states early next week.

Some thoughts on the potential species that could occur with the passage of such a system in the coming days from our friend Doug Gochfeld, a fellow adherent to the gospel of migration so to speak! 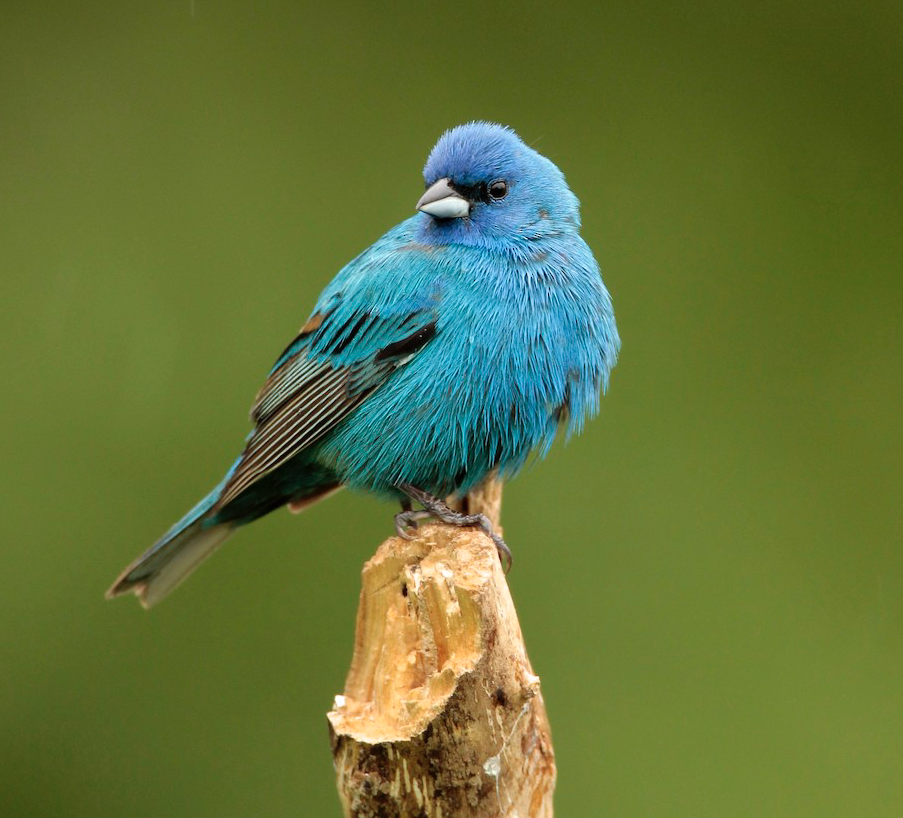 The slingshot effect described above, with southerlies blowing out of the Caribbean and the Southeast which will reach all the way to Newfoundland by Tuesday morning, could entrain birds aiming for points much farther south. Species to be on the lookout for, from the Northeast and New England through the Maritimes (with Newfoundland and Nova Scotia looking like especially strong candidates), are as follows:

Yellow-throated Warbler, Prothonotary Warbler, Hooded Warbler, Summer Tanager, Blue Grosbeak, Purple Martin, and even Cerulean Warbler are all species that are likely to see a spate of sightings north of their usual haunts associated with this storm. Orchard Oriole, Indigo Bunting, Scarlet Tanager, Rose-breasted Grosbeak , Red-eyed Vireo, and Sora are all species which may show up in numbers earlier than usual.

As for real rarities, Swainson’s Warbler is certainly one to watch, as they are on the move right now, and have some track record of mid-April vagrancy. Black-whiskered Vireo (recent observations from Bermuda) and Gray Kingbird are both Caribbean species of which large numbers come to breed in southern Florida, and while they would both be incredible rarities, they are certainly two to keep an eye out for (and maybe even White-crowned Pigeon if you want to get really ambitious/crazy!). Antillean Nighthawk is also in this category, though it is at the very early end of their arrival to and through the Caribbean. In any event, back to a place with some pattern to highlight an opportunity … scrutinize all your nighthawks and Red-eyed type Vireos!

There are a suite of other potential options with some track record of occurrence given similar climatic and temporal conditions:

Swallow-tailed Kite – this species is in prime time for its window of movement on a broad scale from Texas to Florida.

Cave Swallow – most swallows are excellent candidates for drift, and they are on the move, and this species is no exception. Furthermore, there’s some precedent even this spring for this species in the Northeast. 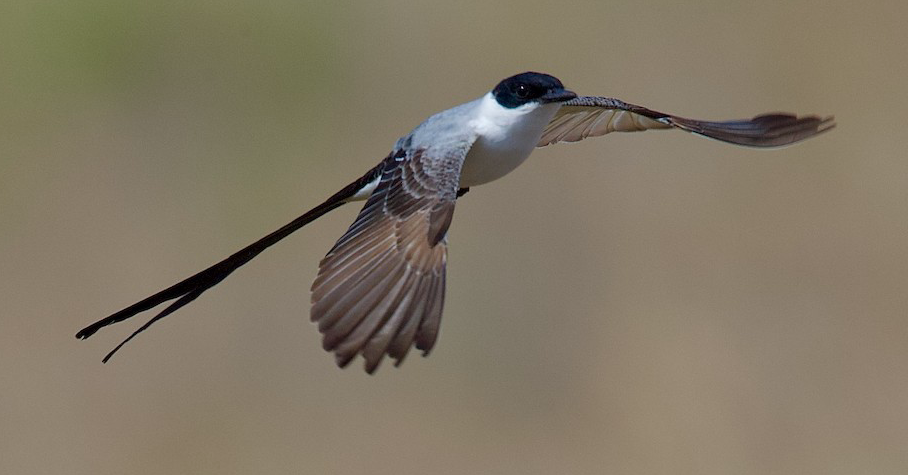 Fork-tailed Flycatcher – Individuals can show up at most times of the year in the US, but this system seems to be a reasonable setup to bring one to the East Coast from any number of southerly points.

And finally … southern waterbirds are also something to keep an eye on, for either arrivals or farther-north-than-usual appearances, including Brown Pelican, Black Skimmer, Least, Common, Gull-billed, and Royal Terns.