Migration Science: one in every four birds gone in the US and Canada

BirdCast highlights many aspects of the study of migration ecology, whether the spectacle or the science behind the spectacle. In this case, we highlight new research, co-authored by a BirdCast team member, that documents an alarming decline in bird populations in the US and Canada.

A study published today in the journal Science reveals that the volume of spring migration, as measured by the NEXRAD radar network in the night skies, has dropped by 14 percent in the past decade. The paper further compiles bird survey data collected on the ground, indicating that bird populations in the United States and Canada have declined by 29 percent since 1970, representing a loss of almost 3 billion birds. The results show tremendous losses across diverse groups of birds and habitats — from grassland birds such as Bobolinks to long-distance migrants such as wood-warblers and backyard birds including Dark-eyed Juncos and American sparrows.

“The historical archive of the US weather radar network gives us an amazing opportunity to study changes in the numbers of migrating birds over long time scales”, says Adriaan Dokter, BirdCast team scientist and co-author of the study. “The radar network picks up an incredible number of birds passing over our heads, many more than we could ever count on the ground. Birds pass through the night sky that may breed far north in Canada, in areas that are rarely visited by ground observers. The fact that we see major declines both in the air with radar and on the ground with surveys, really underscores that we are witnessing a general and widespread ecological crisis.”

Figure 2. Cumulative loss of bird migration from 2007-2017. Significant declines have occurred primarily in the eastern half of the country. Animation by Adriaan Dokter/Cornell Lab of Ornithology 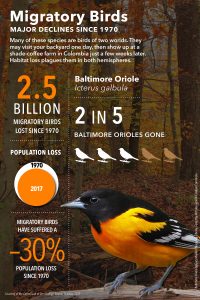 Radar measures the equivalent of “bird biomass” moving through the atmosphere, a gradual wave of birds that moves north as spring progresses (see Figure 1). Because the NEXRAD archive goes back many years, it is possible to estimate how passage of bird biomass has changed over the years.

Over the last decade, the study describes a decrease of 13.6% (+/- 9%), a decline of 1.5% (+/- 1%) per year. Declines have been steep across the entire eastern half of the country, especially in the Mississippi and Atlantic flyways. There was no significant change, however, for Pacific and Central flyways. As shown in Figure 2, the loss of migration is highest in Iowa, Missouri and Illinois. Because the baseline volume of migration across these states is so high, this is where the net loss of migration is also highest.

The power of studies that combine big data and the analytical tools to process these data with the power and extent of remote sensor networks and citizen scientists is enormous, showcasing the potential to use science to document our dramatically changing planet and provide an opportunity to slow, stop, and hopefully reverse some of these changes. The BirdCast team enthusiastically supports the diverse group of scientists that authored this study, and is hopeful that the research and outreach now possible will lead to new knowledge and inspiration for us all to halt these declines, save birds, and by proxy maintain the health of the fragile ecosystems of the planet.

Visit http://3billionbirds.org for more information on this study, and on how you can help to bring birds back!