November 13 saw an epic Franklin’s Gull flight to the East Coast of the United States the likes of which have not been previously recorded. Large numbers of Franklin’s Gulls appeared from the eastern Great Lakes through New England and south through the mid-Atlantic states. This flight included some unprecedented flocks (!) of birds passing Cape May, NJ (check out Tom Johnson’s list) and even included birds in Bermuda and Nova Scotia and even Iceland (!). 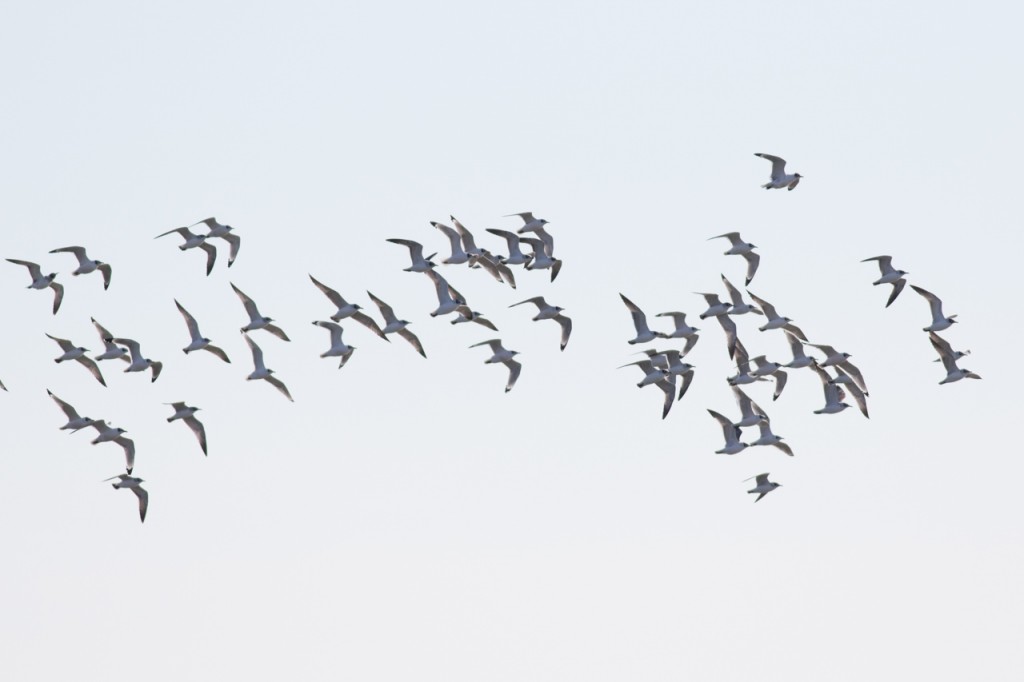 Franklin’s Gull madness at Cape May, NJ. Unprecedented were flocks of this species passing Cape May Point, NJ, and many other locations in the Northeastern US. Highly unusual to say the least! Photograph, Tom Johnson.

And if the epic gull flight was not sufficient to excite the birding masses, Cave Swallows were also in strong evidence, including an insane and nicely documented count in Cape May, tens to hundreds of birds in Massachusetts and through New England, including these two on Cape Cod at Chatham, and scattered individuals from the Great Lakes east through the St. Lawrence River. Please see the eBird site for some preliminary discussion of this amazing event! 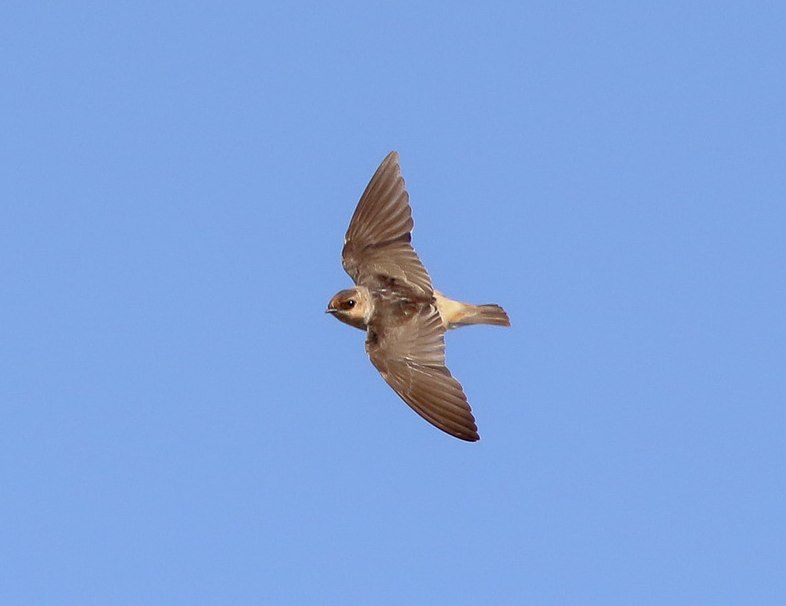 Although now a nearly annual occurrence in the Northeastern US, numbers of Cave Swallows associated with the passage of low pressure through the Northeastern US were far above “normal” levels. This push of birds included several hundred in Cape May, NJ. Photograph, Tom Johnson.

When such large and unusual displacement events occur, BirdCast tries to take note and offer some foundations for explaining the observed patterns. Several threads have already started to tackle this discussion of how and why did so many Franklin’s Gulls and Cave Swallows appear in the Northeast. In particular, David Nicosia, a collaborator on the BirdCast project, discussed the always relevant analysis of data from the Air Resources Laboratory (ARL): see this analysis for Cave Swallow, and this for Franklin’s Gull. Below, we will try to expand upon these existing threads with additional thoughts for arm chair consideration.

Clearly, a massive storm system moving east through the Midwest on 12 November 2015 was the primary factor in this displacement. But is there more to the story? 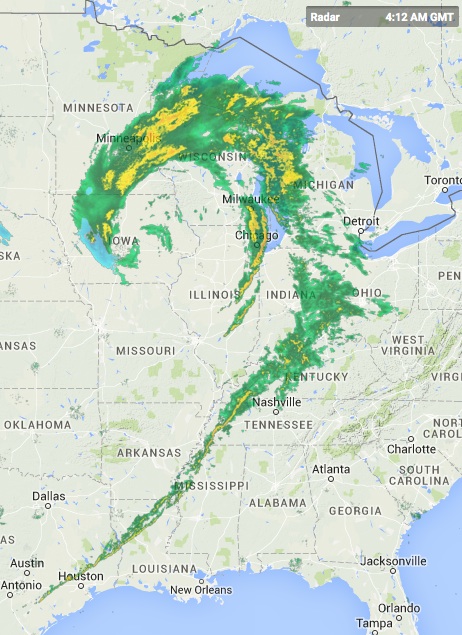 This low pressure system was intense, and in many ways it appeared eerily similar to (at least) two previous intense Midwestern storms systems from years passed: November 9-11, 1998 and November 10, 1975. Some may remember the former as another system that deposited its Franklin’s Gull bounty in the Northeast;

and the latter as the storm that sank the Edmund Fitzgerald in Lake Superior (but did not seemingly displace many Franklin’s Gulls, certainly few reported in the days following in the Northeastern US). But why then were no unusual movements of Franklin’s Gulls noted in 1975. Could they have been missed? Or did they not occur? 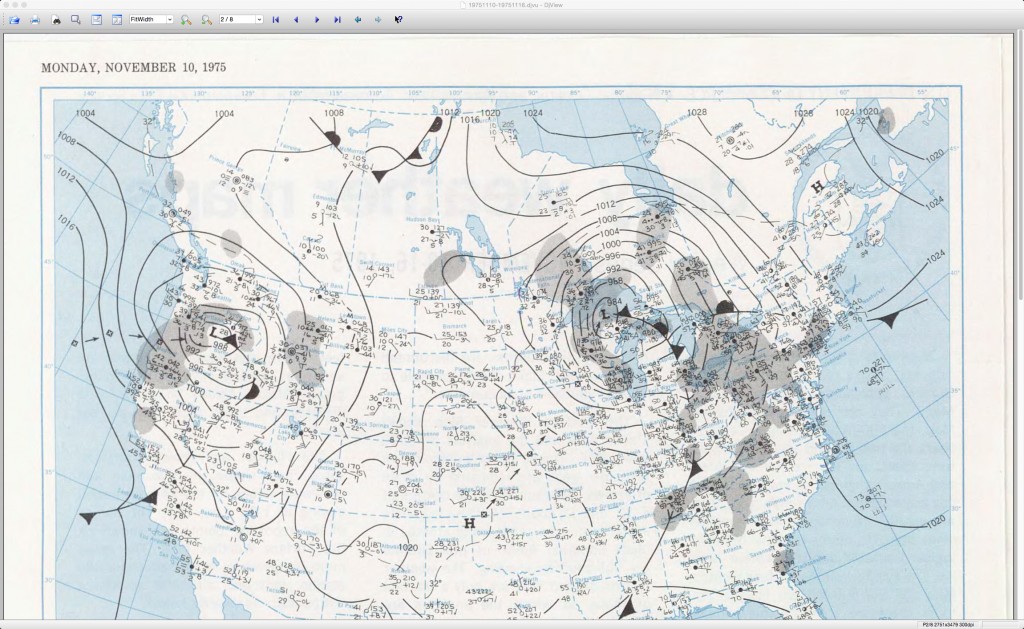 So the how and the why are partially answered in some study of the passage of strong mid-latitude cyclones that are occasional in passage through the Midwest and Great Lakes. These are storms that are similar to hurricanes, but are not tropical and are usually substantially larger in diameter (see this nice description). Each of the storms mentioned above fits, or nearly fits, into that category of storm. But low pressure systems often track this route, albeit without the intensity of these strong systems, so why was this year different, and what might 2015 and 1998 have in common?

A potential explanation that we will explore more thoroughly in part two of this three-part feature considers the combined effects of a strong mid-latitude cyclone as a primary factor (how) and anomalously warm temperatures in the typical October and early November distribution of these species (why). We will be exploring a possible connection between strong cyclonic storms and the migration conditions in these species’ typical distribution ranges that may have predisposed them to significantly greater entrainment and transport in 1998 and 2015. Stay tuned!