Hurricane Harvey came ashore on the central Texas coast last week with an almost unimaginable combination of destructive winds and rain. It has meandered around central Texas, spawning unprecedented and catastrophic flooding. And now the remnants of it circulation, back over the Gulf of Mexico, are about to come ashore in southwest Louisiana. Team BirdCast has been tracking the avian fallout from this storm, perhaps a brief respite for some to escape from the horrible scenes of the devastation in Harvey’s wake. Observers have been reporting from safe locations, where and when they can venture out safely (the absolute top priority).

Its current path is forecast to cross the coast along the Texas/Louisiana border on Tuesday evening and continue inland over Louisiana, eventually weakening to a tropical depression. By Saturday afternoon its remnants arrive in the Ohio Valley. 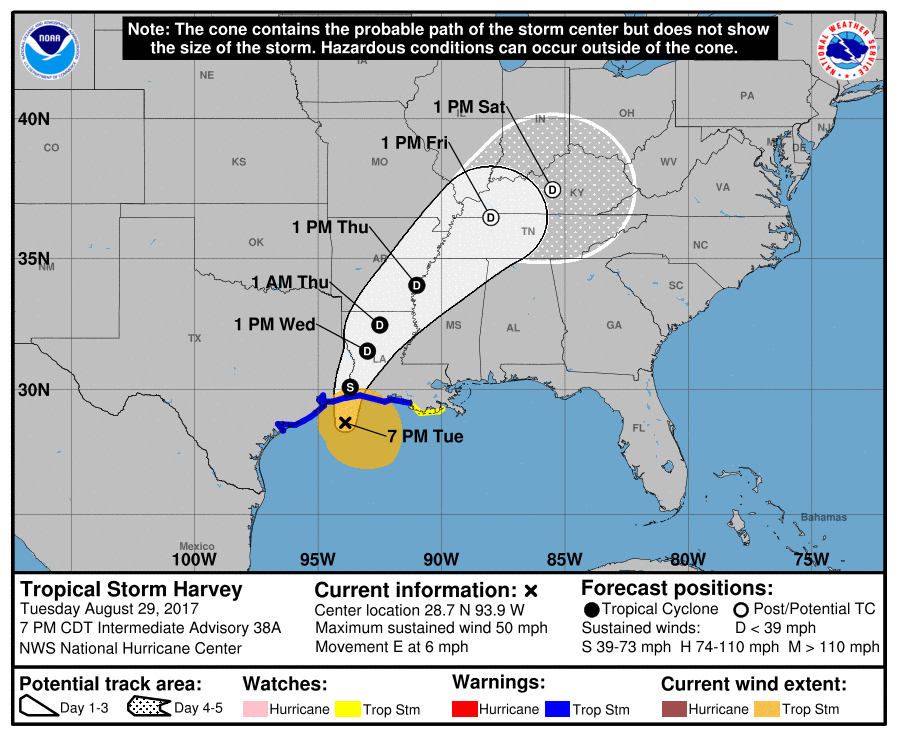 This slow moving storm already produced numerous entrained and displaced birds, like Magnificent Frigatebird, Sooty Tern, and Brown Booby; its slow speed and meandering forecast also displaced numerous near shore and coastal birds to locations far inland (e.g. Royal, Sandwich, Least Terns), a pattern not often seen with faster moving hurricanes. We expect a similar mix of species as the storm moves ashore over Louisiana on Tuesday and Wednesday. When conditions are safe for viewing, visits to large inland lakes are likely to yield a spectacle of entrained and displaced birds. Additionally, shorebirds and high flying but scarce migrants like Sabine’s Gull and Long-tailed Jaeger may drop out on these larger bodies of water as the remnants of Harvey move farther inland. And for those far removed from the point of landfall, Magnificent Frigatebird has been known to travel far inland in the wake of storms like this, so keep eyes skyward.

Tell us what you see, but please remember, safety, above all, is the number one priority.