Scattered light to moderate movements occurred over the weekend, primarily in the Desert Southwest and Central Valley of California. This pattern continued through much of the rest of the week, with Wednesday and Thursday nights having the greatest extents of such movements across southern portions of the region. Species on the move this week included Swainson’s Hawk, Turkey Vulture, Black-chinned and Rufous Hummingbirds, Tree, Cliff, and Barn Swallows, Pacific-slope Flycatcher, Warbling and Bell’s Vireos, Yellow, Wilson’s and Lucy’s Warblers, Vesper Sparrow, and Hooded and Bullock’s Orioles. 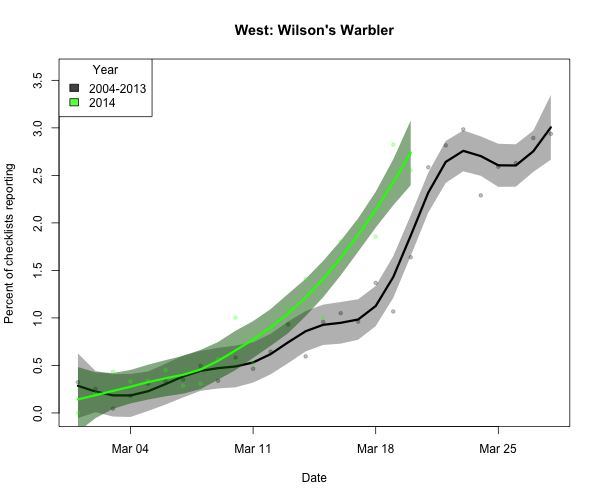 Wilson’s Warblers beginning to reappear in many areas of the West. 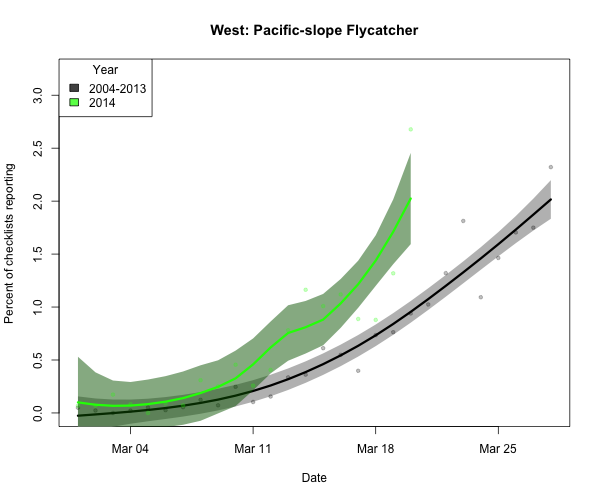 As we highlighted in Monday’s Species on the Move feature, Pacific-slope Flycatchers are arriving somewhat ahead of the last decade’s average. 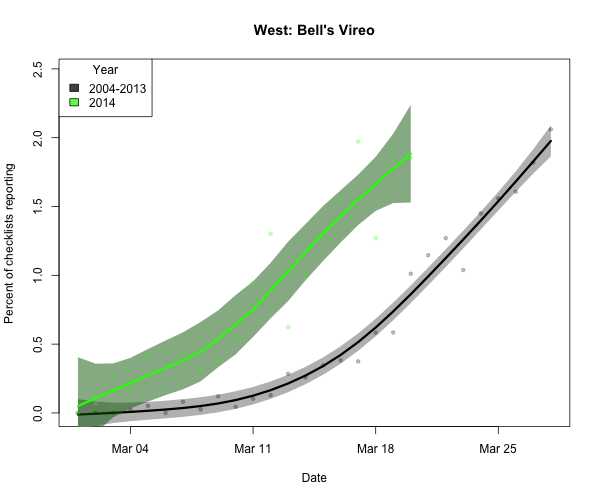 Interestingly, this pattern of early arrival is mimicked by other species too, like Bell’s Vireo (and Warbling). 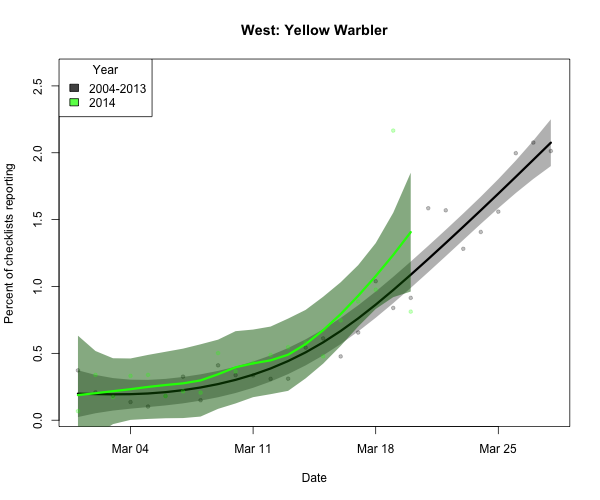 But the beginnings of the Yellow Warbler influx appears to be right on schedule.

Widely scattered light to locally moderate movements began the weekend in the central and southern Plains, with light movements continuing into the early portion of the work week as unfavorable conditions kept things quiet in many areas. It was not until Thursday night that more favorable conditions allowed light to moderate movements to return to the eastern reaches of the central and southern Plains. Moderating conditions and more favorable winds spawned these movements, while precipitation and cool temperatures kept most movements under wraps farther north. Species on the move this week included Blue-winged and Green-winged Teal, Northern Shoveler, Ruddy Duck, Bufflehead, Great Egret, Turkey Vulture, Eastern Phoebe, Field, Chipping, and Vesper Sparrows, and Common Grackle. 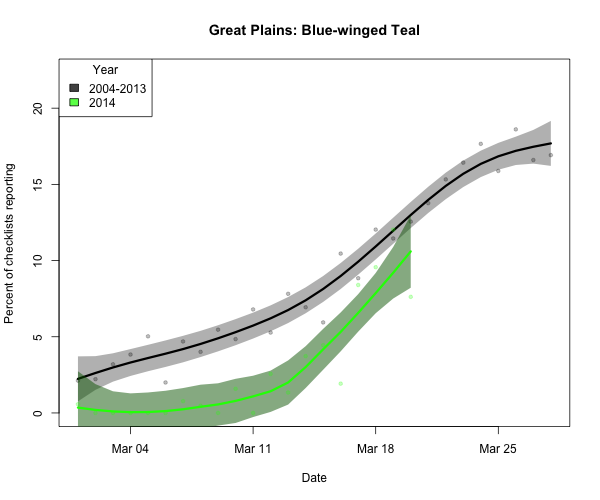 Slow starts seem to characterize many arriving species so far this spring. Blue-winged Teal is no exception, but this species sure made up a lot of ground this week! 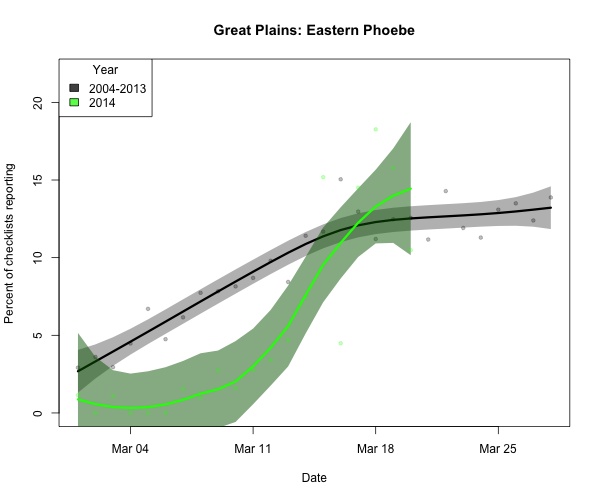 Eastern Phoebe is another species that has recently arrived in numbers in this region. Compare this to the phoebe graph for the Great Lakes and Northeast region (below) — a strikingly different pattern. 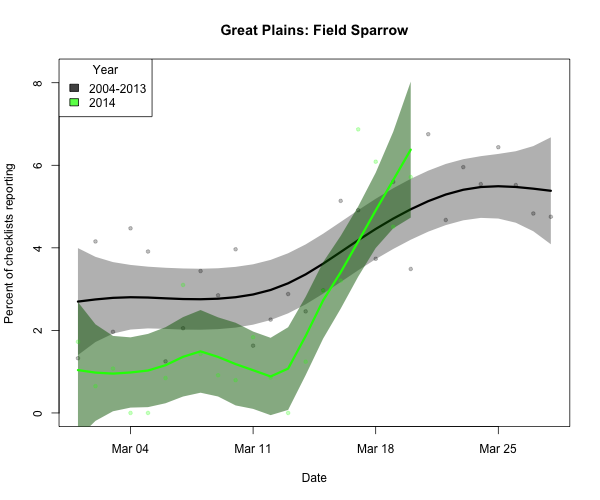 Field Sparrow made a similarly impressive jump this past week.

Scattered light to moderate movements occurred over the weekend in the central Mississippi Valley while the rest of the region remainder quiet under the influence of largely unfavorable conditions. By Tuesday night signs of change were in the air, as light to moderate movements returned to the Mississippi and Ohio River valleys and the southern Great Lakes. But this pulse was short-lived, as unfavorable conditions returned to shut down most areas of the region for the remainder of the period. Species on the move this week included Blue-winged Teal, Wood Duck, Long-tailed Duck, Pied-billed and Red-necked Grebes, Great Blue Heron, Osprey, Sandhill Crane, American Woodcock, Snowy Owl, Eastern Phoebe, Horned Lark, American Robin, Song and American Tree Sparrows, Snow Bunting, Common Grackle, Red-winged and Rusty Blackbirds, and Eastern Meadowlark. 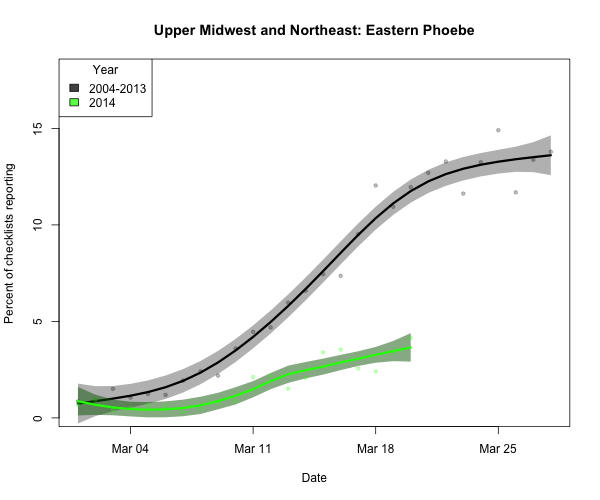 Although phoebes did make progress this past week, birds in this region continue to lag behind the average pace. This pattern is very different from that of Great Plains birds (above). 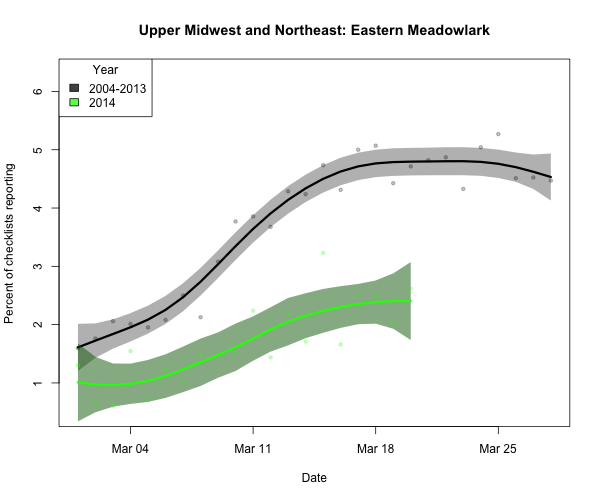 Eastern Meadowlark is another species that has presumably been held up by colder- (and snowier-) than-usual weather. 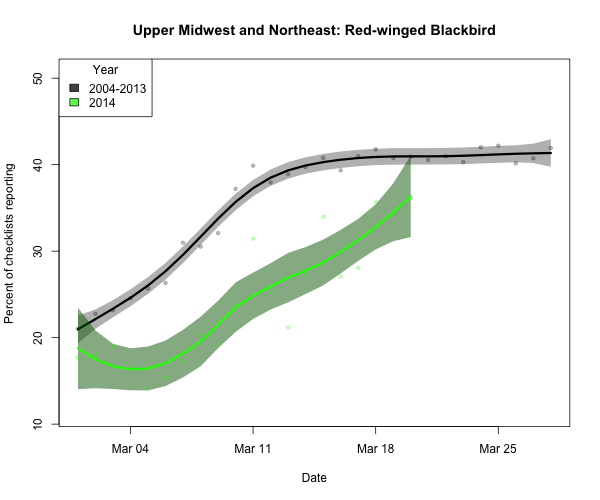 Red-winged Blackbirds also started out slow — but, unlike phoebes or meadowlarks, this species has made up ground and is now on territory across much of the region. 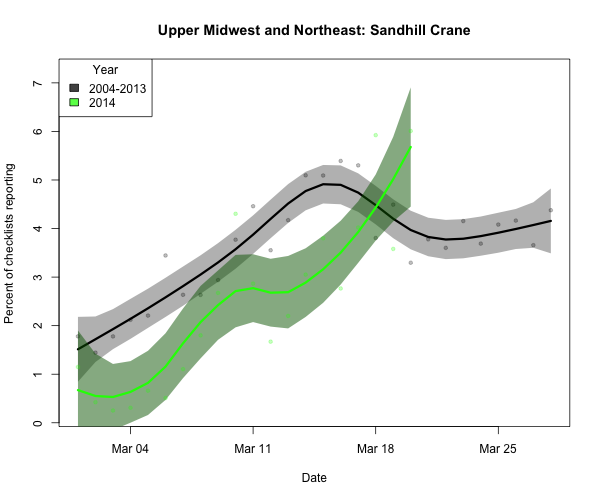 Sandhill Crane was another major mover in the region this past week. 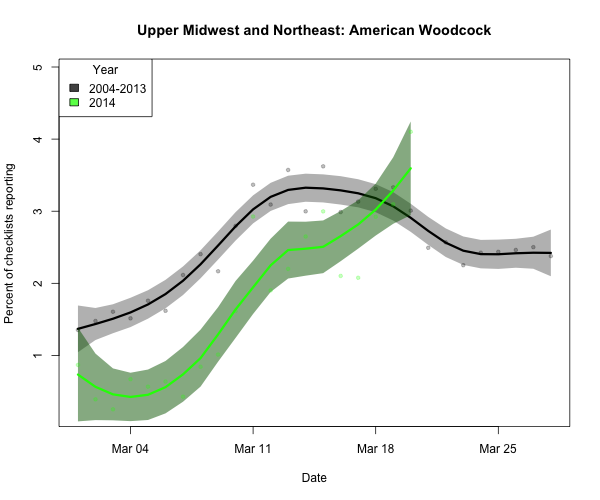 With the snow finally melting, now is the time to find American Woodcocks! 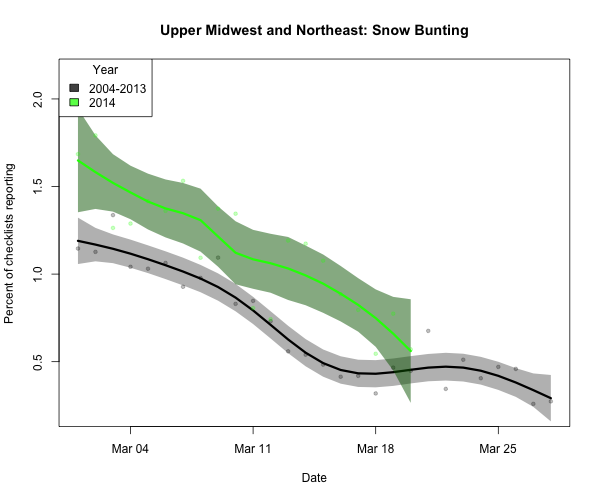 Light to moderate movements kicked off the weekend, primarily east of the Mississippi River. Passing low pressure and associated precipitation and unfavorable winds shut down migration for the rest of the weekend and into the beginning of the week in most areas away from Texas and Florida. By Tuesday and Wednesday nights new pulses of light to moderate movements tracked a return of favorable conditions across the region, first primarily west of the Mississippi River and then in Florida and the southern terminus of the Appalachians. Widely scattered light to moderate movements ended the period, primarily along the southern and western edges of the region. Species on the move this week included Snow Goose, Northern Pintail, Ring-necked Duck, Redhead, Black-necked Stilt, Pectoral Sandpiper, Broad-winged Hawk, Ruby-throated and Black-chinned Hummingbirds, Scissor-tailed Flycatcher, Barn and Northern Rough-winged Swallows, Yellow-throated and White-eyed Vireos, Blue-gray Gnatcatcher, Brown Thrasher, Louisiana Waterthrush, Northern Parula, and Black-and-white, Worm-eating Warbler, and Golden-cheeked Warblers. 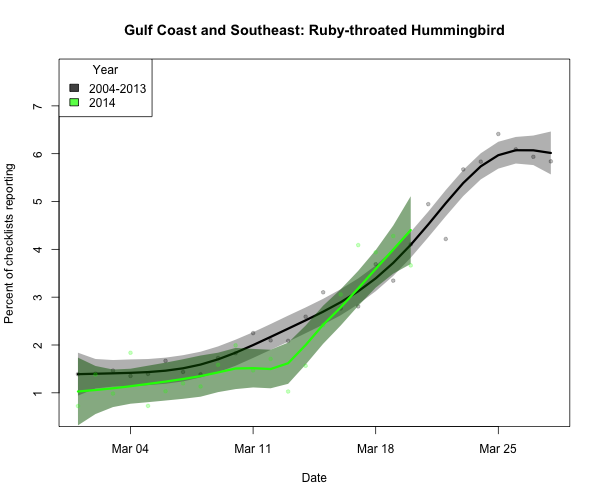 The hummingbirds are on the way! This past week saw the first substantive arrivals of Ruby-throated Hummingbird in the Southeast. 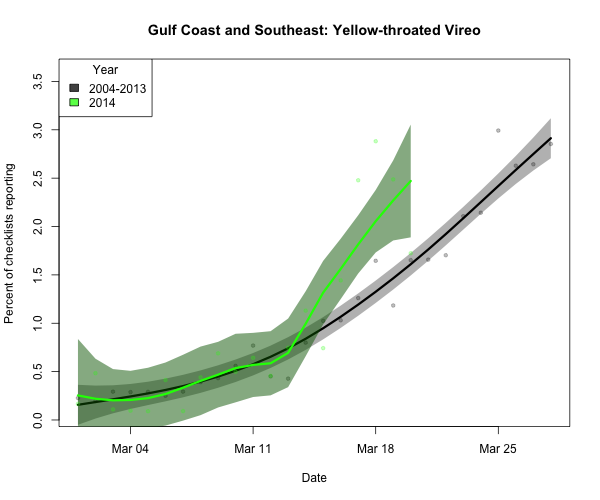 Many songbird species are arriving too — for example, Yellow-throated Vireo. 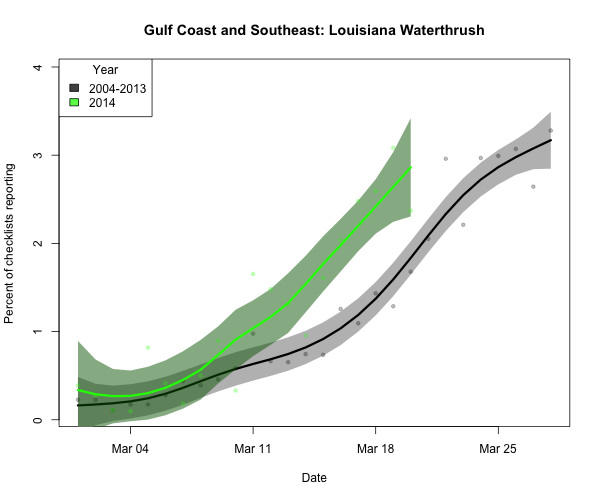 Another early migrant, Louisiana Waterthrush, is appearing, and will soon begin pushing north into the Great Lakes and Northeast region. 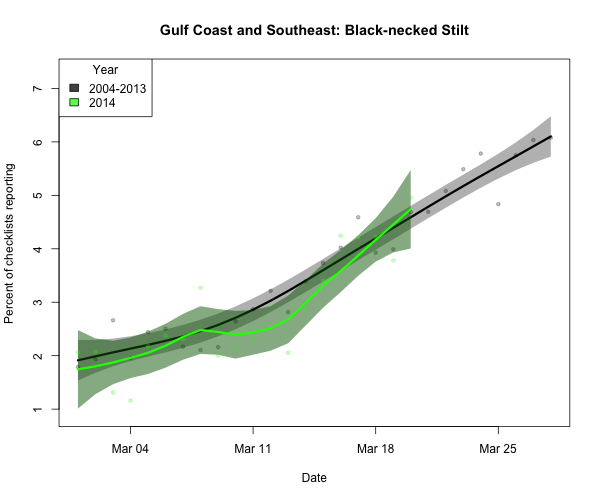 Shorebirds are also on the increase, like Black-necked Stilt, Pectoral Sandpiper, and Short-billed Dowitcher. 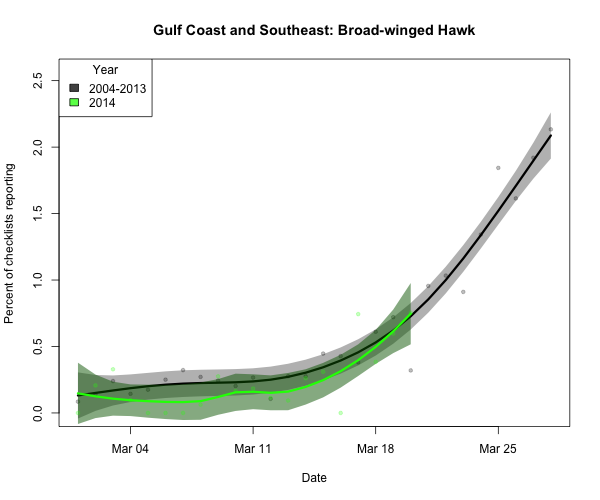 Broad-winged Hawks are just beginning to appear in the southeast, and will soon spread northward. Be on the lookout for early migrants, almost always adults!

Highlights of the week:

Blue-winged Teal continued to move into the BirdCast regions (except the West . . .) on or nearly on the schedule of the previous decade’s arrivals in the Gulf Coast and Southeast region but behind this schedule in the Great Plains and Upper Midwest and Northeast. 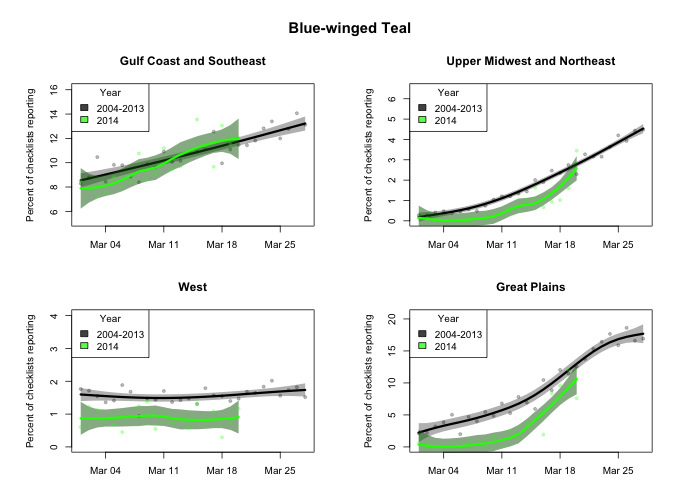 The Snowy Owl invasion of winter 2013-2014 is likely coming to an end, as birds in the Great Plains and Upper Midwest and Northeast retreat toward their more typical Arctic ranges (of course, the West and Gulf Coast and Southeast have little to contribute to these patterns given the distribution of owls this winter . . .). 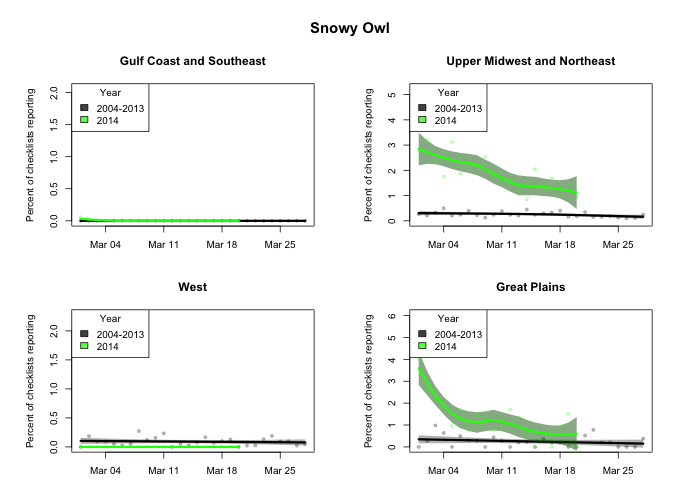 Snow Geese are on the move, largely on or slightly ahead of the previous decade’s departures depending on your region. This past week’s weather was not terribly favorable in many places for large movements to occur on consecutive days. 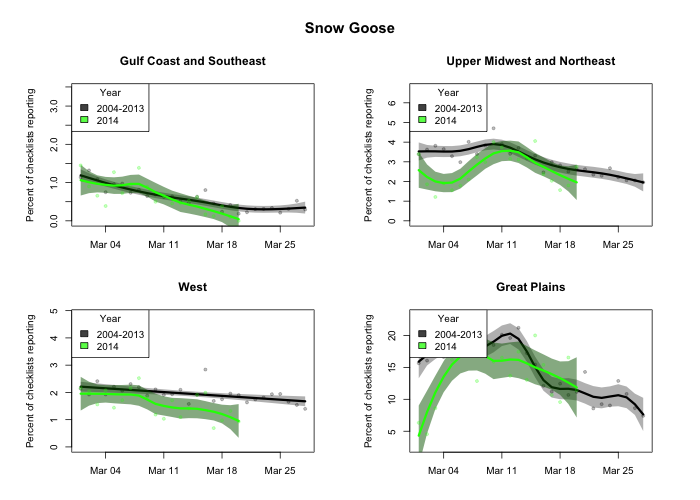 Swallow-tailed Kite overshoots (see the map below) have been surprisingly early this year, with more recent reports this past week in the DelMarVa region and even as far afield as Bermuda (!). In many previous years, warm and southerly flow has brought numerous individuals far to the north of their typical breeding range in the Southeast. But this year’s March birds, while not totally unprecedented, may speak to multiple different expressions of changes in the species’s range and phenology in its breeding range. Is this a signal of explorers from an increasing population, representing the fringe of individual’s strategies to move on favorable conditions whenever they occur? Is this a signal of U.S. populations responding to climate changes with earlier arrivals based on previous year’s successful March arrivers? 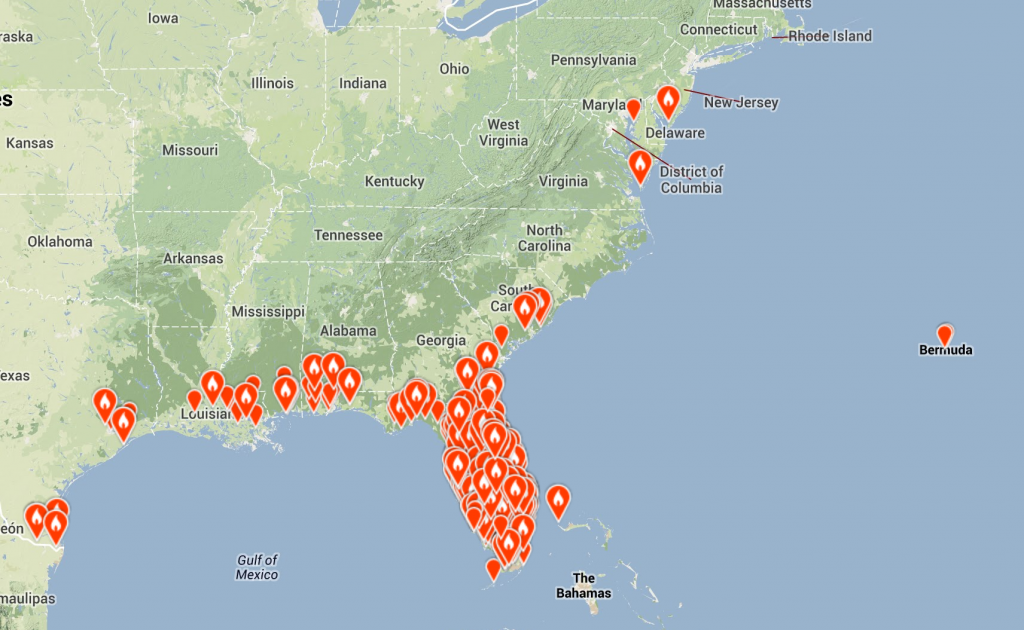 Swallow-tailed Kite sightings in 2014, from eBird.