Scattered light migration occurred over the weekend of 7-9 March, with some locally moderate movements in portions of the Pacific Northwest and California. These movements gradually appeared farther east in the region, as unfavorable conditions spread into the Northwest, and by Monday night most light and moderate movements were scattered locally from the Central Valley of California through the Desert Southwest. Midweek saw mostly light movements widely scattered across the region, with slightly heavier movements in portions of the Desert Southwest, Central Valley and Pacific Northwest. Movements in these areas intensified to end the period, while most of the remainder of the region saw minimal movement on radar. Species on the move this week included Greater White-fronted Goose, Gadwall, Ring-necked Duck, Redhead, Hooded Merganser, Herring and Ring-billed Gulls, American Kestrel, Say’s Phoebe, Lucy’s Warbler, and White-crowned and Song Sparrows. 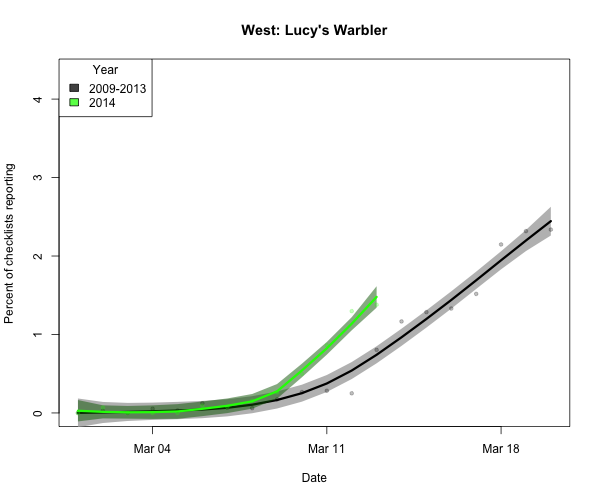 Lucy’s Warblers have begun arriving in the West. 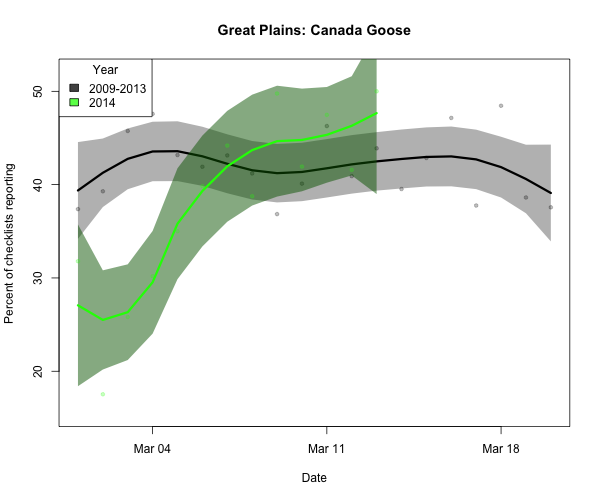 Canada Geese are currently moving through the Great Plains in numbers.

Local light movements were apparent for the weekend in the region, growing on Monday night into light to moderate movements from the central Mississippi River valley east to DelMarVa. As low pressure and precipitation moved into the region, light to moderate, and even locally heavy movements occurred ahead of its passage from the Ohio River valley east and north into New York. The passing of this system, and all of its rain and snow, shut down movements across the board, with a return of local light to moderate movements in the Mississippi River valley by Thursday night. Species on the move this week included Canada and Snow Geese, Tundra Swan, Wood Duck, Green-winged Teal, Northern Pintail, Ring-necked Duck, Double-crested Cormorant, Turkey Vulture, Osprey, Rough-legged Hawk, Sandhill Crane, Killdeer, American Woodcock, Yellow-bellied Sapsucker, Tree Swallow, Hermit Thrush, Yellow-rumped Warbler, Red-winged Blackbird, Common Grackle. 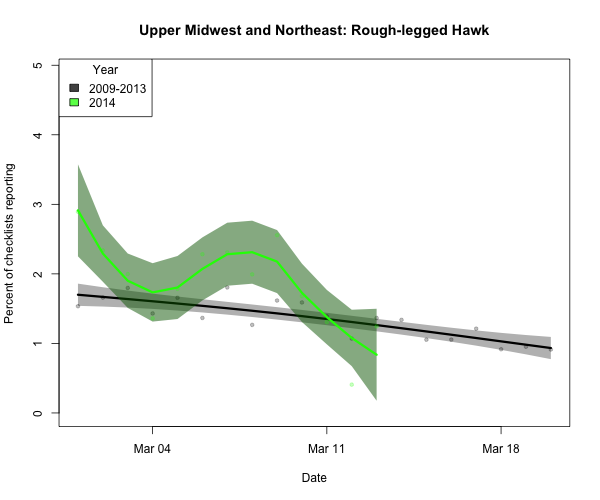 Rough-legged Hawks are departing their winter haunts for points north. 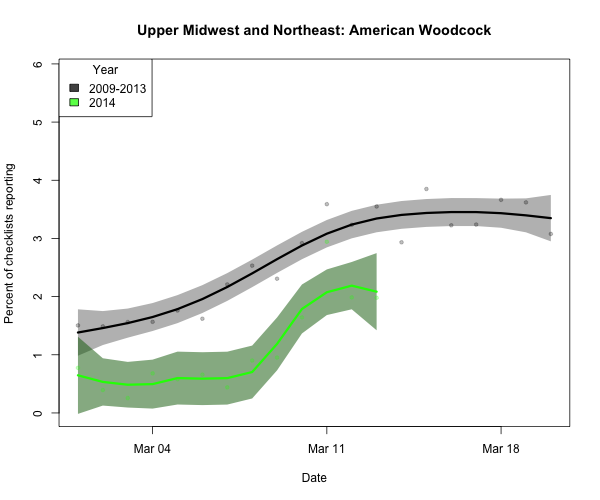 American Woodcocks are returning to the region — a welcomed sign of spring!

Localized light to moderate movements kicked off the weekend along the Sabine River and east of the Ozarks. Scattered light to moderate movements gradually shifted east over the weekend tracking marginal and slightly favorable conditions through the region to the Florida Peninsula by Sunday night. The week began with widespread light and locally moderate movements across the region, and built into locally heavy movements on Tuesday night. These included a heavy flight of migrants from Cuba and heavy movements along the Atlantic Coast of the Southeast. Low pressure tracking east shut down movements in its wake across the region, with some return of light to locally moderate movements west of the Mississippi River to end the period. Species on the move this week included White-eyed Vireo, Barn and Northern Rough-winged Swallows, Blue-gray Gnatcatcher, American Pipit, Northern Parula, Black-and-white and Yellow-throated Warblers, Savannah, Fox, White-crowned, and White-throated Sparrows, Dark-eyed Junco, and Purple Finch. 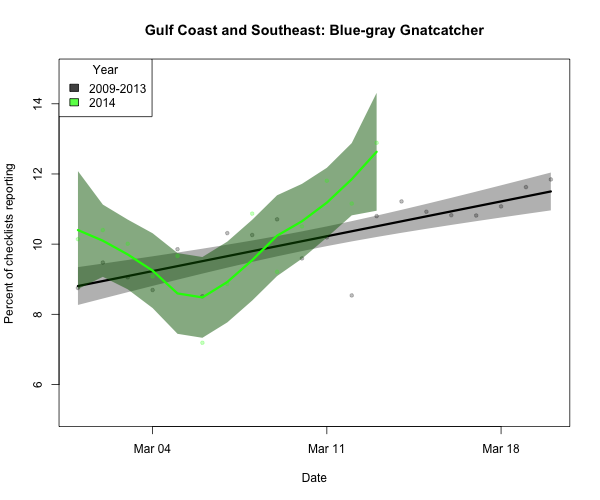 Gnatcatchers are steadily increasing in the south. 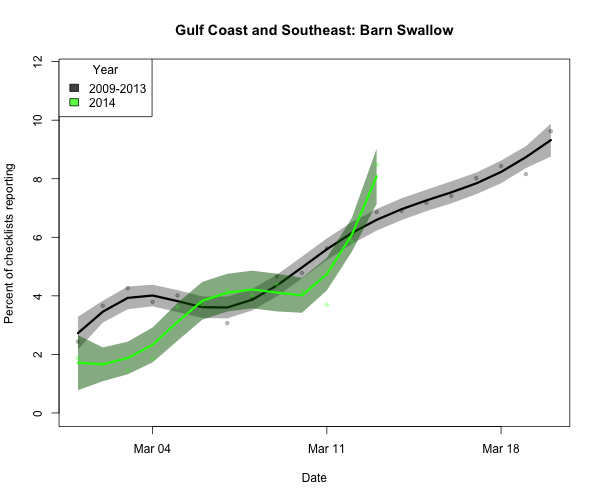 As are Barn Swallows!