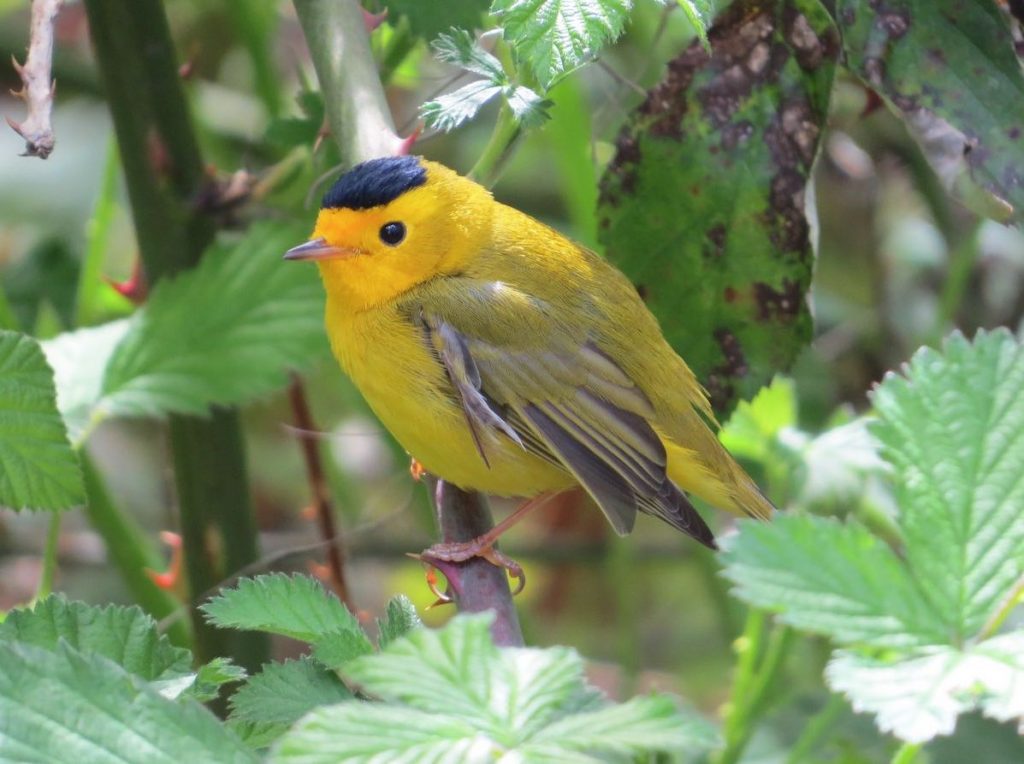 Conditions are mostly marginal for scattered light to moderate flights of Long-billed Dowitcher, Wilson’s Phalarope, Western Wood-Pewee, Swainson’s Thrush, Yellow Warbler, Western Tanager, and Bullock’s Oriole after a strong frontal passage in the West, while the first half of the period in the East see many areas with favorable conditions for moderate to very heavy flights featuring Short-billed Dowitcher, Black Tern, Common Nighthawk, Willow Flycatcher, Least Flycatcher, American Redstart, and Wilson’s Warbler. Conditions for trans-Gulf migration will be generally favorable during the period, with the potential for late weekend and early work week fallouts and concentrations in the Gulf Coast states as frontal passages with precipitation are forecast.

Favorable conditions for moderate to very heavy migration are scattered across the region for the first half of the period before a significant cold front passes through the region. Prior to the arrival of this cold front, areas of smaller disturbances will disrupt these movements, shutting down flights where precipitation and unfavorable winds occur. These disturbances also provide an opportunity to look for downed migrants in concentrations and local fallouts, so watch the overlap of favorable conditions and precipitation carefully. After the passage of this front, migration intensity and extent will be greatly reduced in the region, with perhaps the Upper Midwest experiencing a return to favorable conditions to end the work week. Note, the strong low pressure system departing the region late in the week will create onshore winds in the coastal mid Atlantic and in New England, and birders should watch this system carefully for possible pelagic and southern vagrants. BirdCast will update on this possibility as the date grows closer. 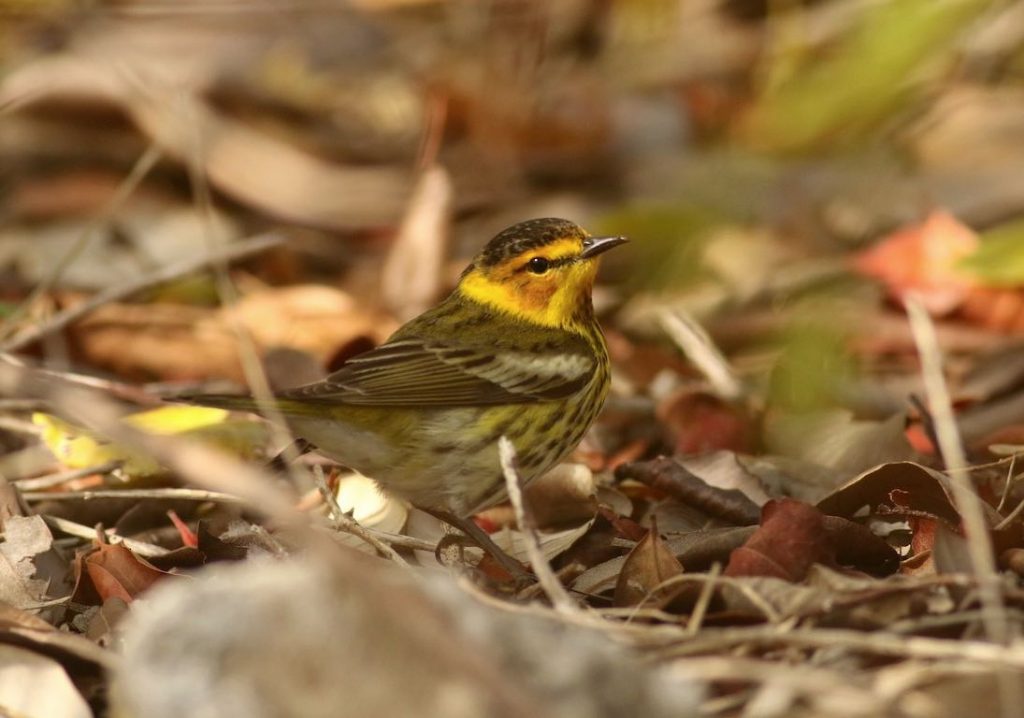 Moderate to very heavy migration will be the norm for Friday and Saturday across the region. By Sunday a strong frontal boundary approaches and then crosses into the Gulf of Mexico, bringing the potential for more fallout and concentration conditions. The western Gulf will experience these conditions first on Sunday and Monday, and gradually the potential shifts east with the passage of the front late Monday and Tuesday. Moderate to heavy flights return post frontal passage by Wednesday, but a disturbance forming in Texas becomes a player in the migration game will some new potential to disrupt the system. The disturbance is forecast to intensify by Wednesday and Thursday, and the potential for trans-Gulf migrants to interact with this intensification means a new round of opportunities to watch for fallouts, particularly for the central and eastern Gulf coast. As this new system continues to intensify and move east, fallout potential follows suit, particularly in Peninsula Florida. The period ends with general unfavorable conditions in source areas for migrants, and unfavorable conditions in the Gulf Coast states as well, suggesting locally moderate movements rather than broad scale heavy flights characteristic of recent days. Note, Tuesday and Friday systems have potential to sweep migrants offshore in Florida, a scenario BirdCast will revisit in the days to come. 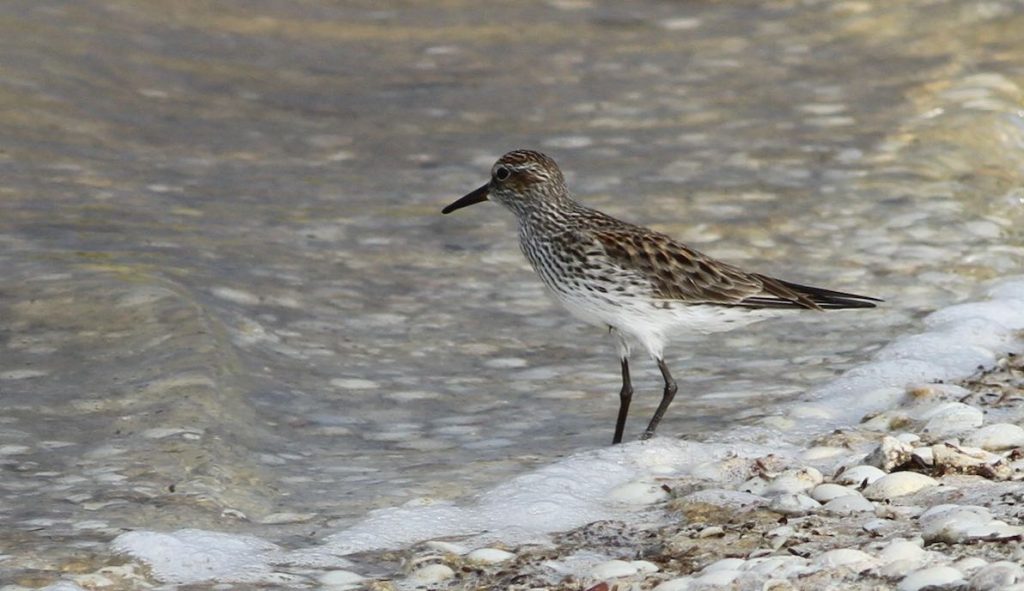 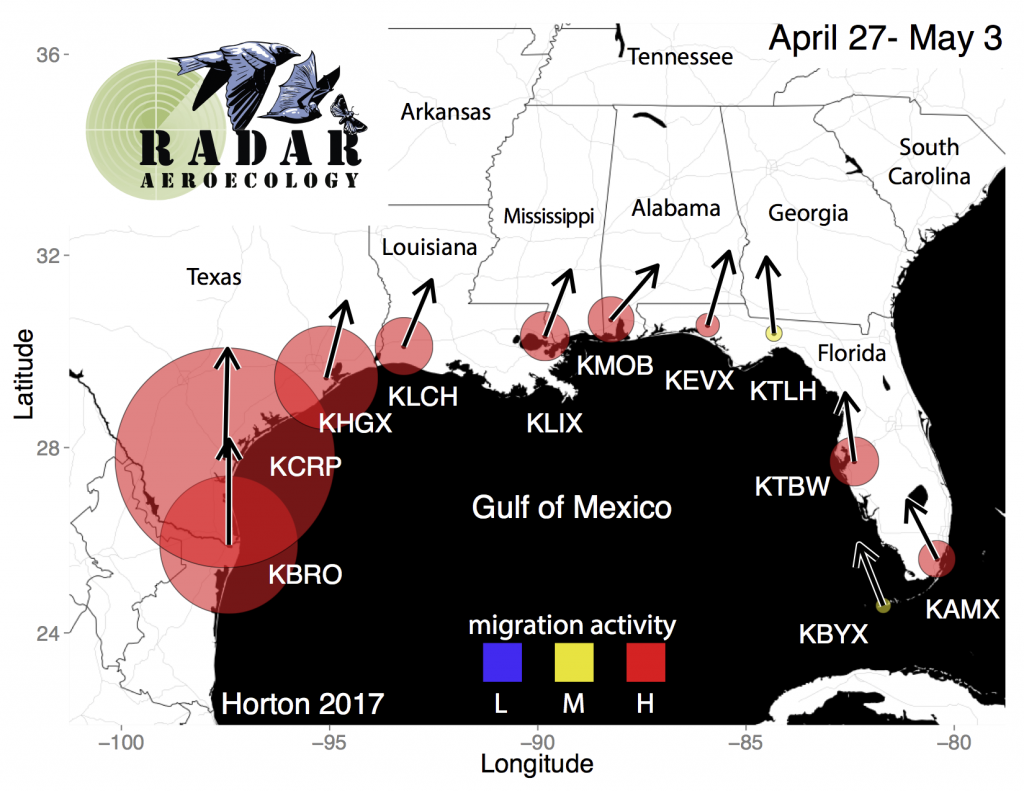 Weekly mean spring nocturnal migration activity and direction of movement in the Gulf of Mexico region for the week of 27 April – 3 May, 1995 to 2015. Circular buffers around radar stations represent migration activity scaled to radar reflectivity (a measure of biological activity), with weekly activity represented by size scaled to the activity at KCRP Corpus Christi and seasonal activity represented by colors scaled to the most intense movements of the spring period (L: light, M: moderate, H:heavy); arrows represent mean track direction (a measure of the direction birds are traveling) derived from radial velocity.

General unfavorable migration conditions are forecast for most of the period. Several disturbances pass through the region, bringing precipitation and unfavorable winds. Migration will be mostly light to moderate, but intensities could be higher if lighter wind or drier conditions than expected occur. The period ends will the arrival of some favorable conditions across much of the region, and moderate to locally very heavy flights will follow their arrival. 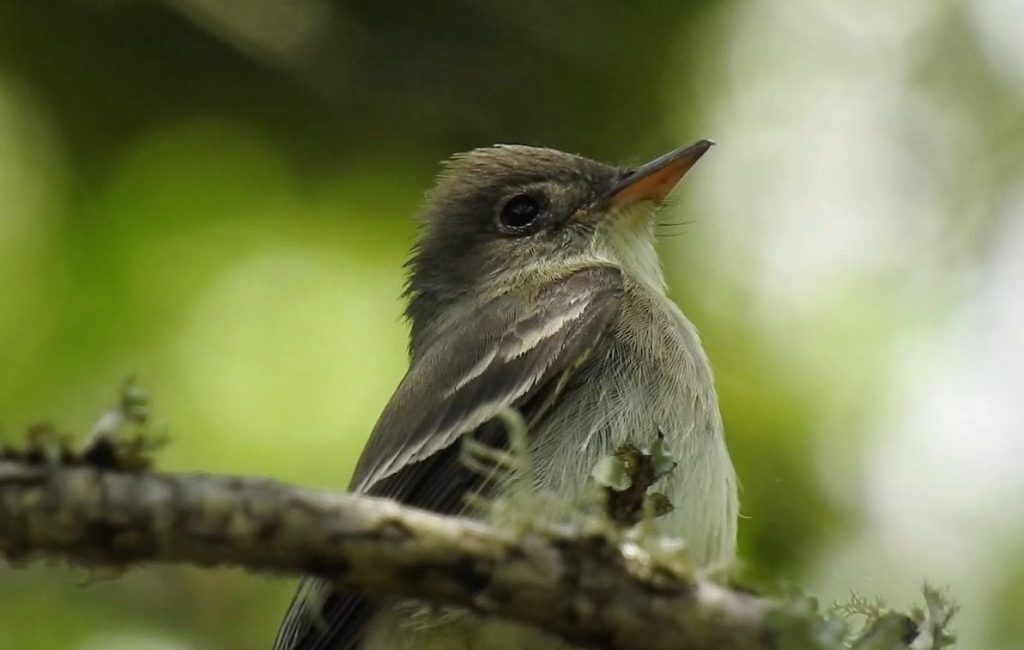 Patches of marginal and locally favorable conditions will be scattered across portions of the region for the first half of the period, notably in the Pacific Northwest and northern Rockies and portions of the intermountain West and Desert Southwest. Light to moderate movements are likely to be similarly local and scattered. More favorable migration conditions increase in their extents later in the period, reaching their greatest extent by Thursday night. This night will see the greatest extent of moderate flights, particularly in the eastern portions of the regions in and along the Rockies front. 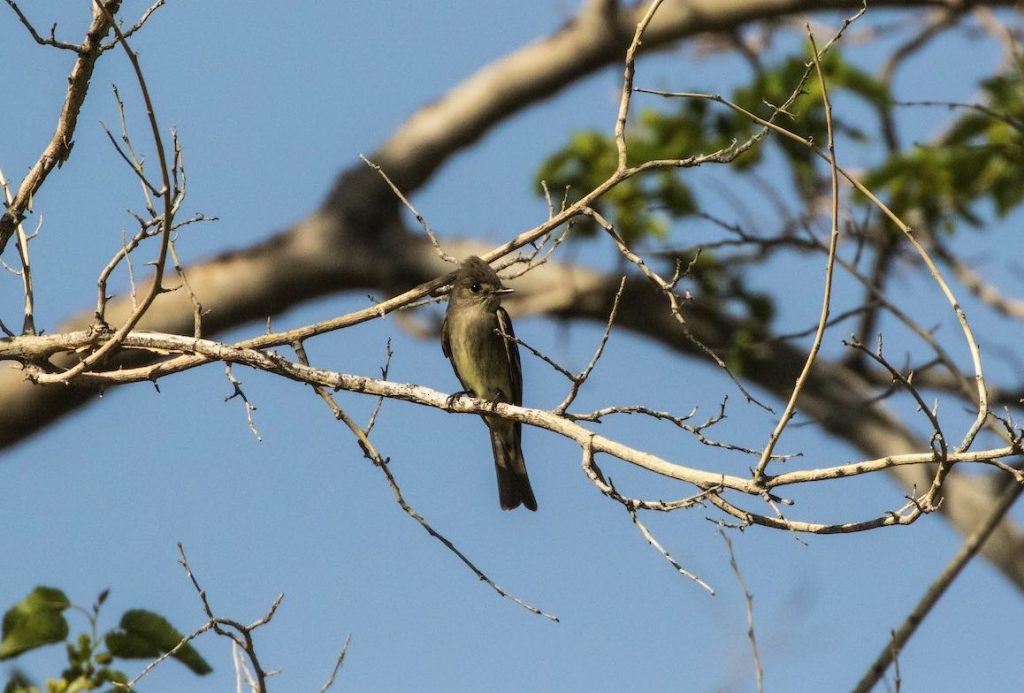