Widespread unfavorable conditions that kick off the weekend and keep migration light will gradually give way to more favorable conditions by Sunday and Monday nights. However, mostly light movements are likely even in favorable conditions given the time of year and the potential pool of species and individuals remaining to move. Similar movements will continue during the early and middle parts of the work week, particularly in portions of the Desert Southwest and the grasslands of eastern Montana and Colorado. But the end of the week will see the return of less favorable conditions to most areas, away from the eastern Rockies and grasslands of Montana where movements, some of which may reach moderate levels, will continue. Species on the move this week will include Common Goldeneye, Bufflehead, Red-breasted Merganser, Tundra Swan, Hooded Merganser, Barrow’s Goldeneye, Bonaparte’s Gull, American Tree Sparrow, Ross’s Goose, Canvasback, Common Merganser, Lesser Scaup, Long-tailed Duck, and Common Redpoll.

An unfavorable start migration-wise to the weekend will gradually yield to much more favorable post-frontal conditions by Monday evening. Moderate and perhaps locally heavy movements will follow the frontal passage, particularly mid to late week as stronger northerly and northwesterly flow build into the region. Many of these movements will include waterfowl and may continue through the day. Note that several periods of return flow interspersed among the favorable northerly flow will slow and stop movements when it occurs. Species on the move this week will include Red-breasted Merganser, Snow Goose, Bufflehead, Long-tailed Duck, Lesser Scaup, Hooded Merganser, Ross’s Goose, Greater Scaup, Sabine’s Gull (this is often a window in which this species appears), Bohemian Waxwing, Lapland Longspur, Common Redpoll, Whooping Crane, and Common Goldeneye.

A large ridge of high pressure approaching and passing through the region for the weekend will bring moderate to heavy flights to many areas, with increasingly coastal distributions to these flights by the early part of the week. Some of these flights may be very heavy and include opportunities to see (in artificial lights of cities) and hear (by flight call) many passing nocturnal migrants. In addition, appropriate morning flight viewing locations would be worth checking on Saturday, Sunday and Monday mornings, depending on your location. Additionally, birders through the region should watch lakes and other inland bodies of water carefully, as precipitation associated with the passage of a frontal boundary and the movement of a strong low pressure center up the Atlantic Coast will ground waterbirds in unusual places. Furthermore, birders in the Great Lakes and immediate vicinity should be watching for odd gulls (e.g. Franklin’s and Ross’s Gulls), as this combination of elements including a blast of cold Arctic air may bring such goodies. Additionally, birders in coastal and northern New England should watch the progress of the strong coastal storm as it moves toward the Canadian Maritimes, as this storm will produce good sea-watching conditions in the northeasterly flow, good morning flight conditions in the northwesterly flow that follows, and also facultative movements of birds displaced by snow associated with the storm’s passage. A further aside, coastal locations should be checked in the immediate passage for the storm for out-of-season Neotropical migrants, similar to the events that followed after the passage of Sandy. After this blast of cold and northerly flow, conditions for continued movements deteriorate and southerly flow returns. However, another strong system is forecast to pass late in the week, bringing a renewed pulse of moderate flights. Species on the move this week will include Common Goldeneye, Bufflehead, Tundra Swan, Hooded Merganser, American Tree Sparrow, Common Redpoll, Red-breasted Merganser, and Snow Bunting. Additional, western strays may continue to arrive in the region with the passage of these weather events, possibly including Ash-throated Flycatcher, Townsend’s Solitaire, Varied Thrush, and Cave Swallow.

Moderate to heavy movements are likely for the weekend, becoming increasingly easterly in distribution through Sunday and Monday. Then a period of relative calm follows, when southerly winds return as high pressure moves into the region. But a new front approaches and returns favorable northerly flow and widespread moderate to locally heavy movements to end the period. Species on the move this week will include, among continuing arrivals of Purple Finches, Pine Siskins, American Robins, and blackbirds, Hooded Merganser, Dark-eyed Junco, Lesser Scaup, Bufflehead, and American Pipit.

Air parcel analysis suggested that if any Neotropical migrants were to take flight and become entrained in circulation off the east coast of Florida, or over the Florida Straits or nearby locations, that they could be carried far to the north of their intended destinations. Please report any unusually late Neotropical migrants to eBird, of course, so we can see whether this unusual occurrence actually comes to pass.

The image below comes from the Air Resources Laboratory HYSPLIT model and shows the projected path of an air parcel 500 m above the ocean off the Florida coast assuming the current forecast winds prevail as forecast. Each colored line represents a different trajectory from an ensemble model of this projected path, and each segment of each line represents a new 12-hour period. Numerous trajectories that make up this ensemble model suggest that air parcels that start off the Florida coast will end up far north off the coast of the Canadian maritimes in 36-72 hours. If birds happen to track these air masses, the northeastern US could be in for a few surprises . . . perhaps! 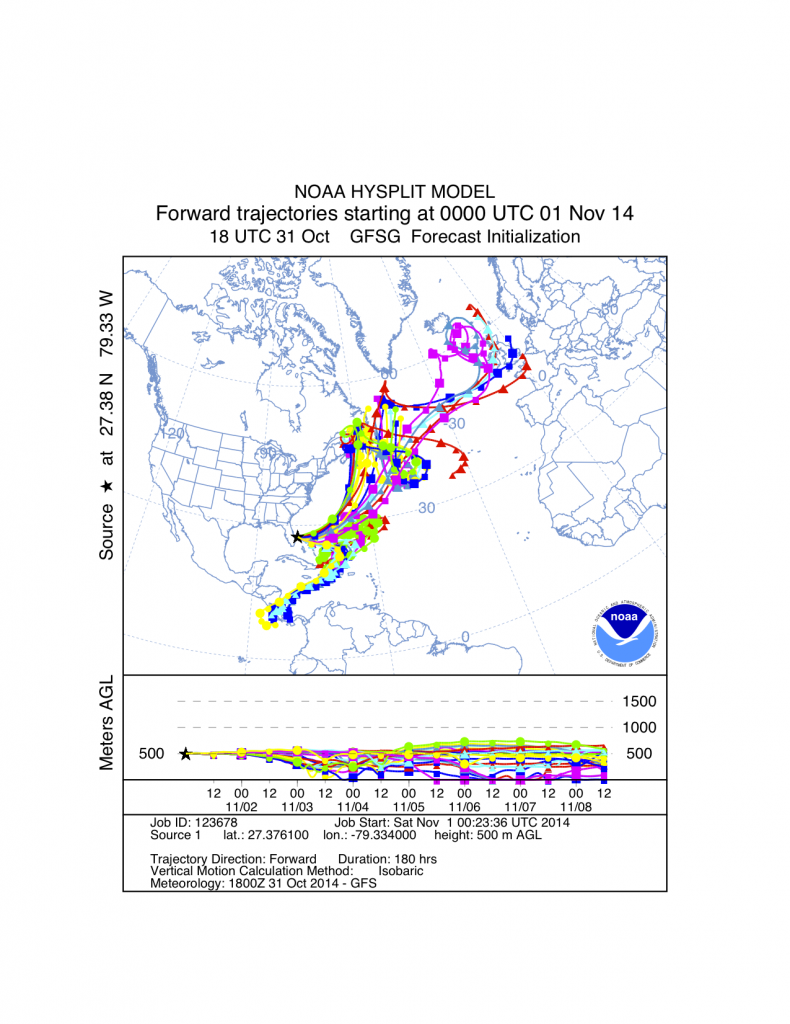