Both West and East experience periods of moderate to locally heavy movements this week, as the large but increasingly less diverse movements of October are in full swing. Birds on the move this week will include Golden-crowned and Ruby-crowned Kinglets, Hermit Thrush, Yellow-rumped Warbler, White-throated Sparrow, and Dark-eyed Junco.

A brief note about this week’s forecast map: this week’s 925 millibar forecast imagery looks distinctly different from previous weeks’ animations. This is because our collaborators that assist in producing the baseline 925 millibar forecast wind and precipitation maps were affected by the shut down of the U.S. government. Please note, the animation below does not depict use colors to depict precipitation, rather these colors depict wind speed in knots.

Much of the region away from the Pacific Northwest will begin the period with favorable conditions for moderate movements where precipitation does not fall. The favorable conditions shift South and East on Saturday night, and more moderate movements will track this shift. Other portions of the region away from the Pacific Northwest will experience mostly light movements, although some portions of coastal California and the Central Valley may experience heavier movements. The next big pulse of favorable conditions arrives by Tuesday and Wednesday with the passage of a strong low, when the Pacific Northwest and portions of the northern Rockies will experience moderate movements, gradually diminishing through midweek and expanding West of the Rockies by late in the week. Birds on the move this week Turkey Vulture, Barn Swallow, Ruby-crowned Kinglet, Hermit Thrush, Wilson’s, Yellow, and Yellow-rumped Warblers, White-throated Sparrow, and Dark-eyed Junco.

Low pressure moving East across the region will bring moderate to locally heavy movements to the region beginning on Friday night in the far northern Plains and expanding South by the beginning of the week. Southerly flow returns rapidly after this burst of movement, and continues through the remainder of the period; migration will be light across the region, only exceeding this level locally in areas where winds are much lighter than forecast. Birds on the move this week will include Greater White-fronted Goose, Turkey Vulture, Swainson’s Hawk, Sandhill Crane, Chimney Swift, Barn Swallow, Golden-crowned Kinglet, American Tree Sparrow, and Dark-eyed Junco.

Much of the region will experience sparse light movement to begin the weekend, with the exception of the eastern Great Lakes and northern Appalachians North and East through New England. These areas will experience more favorable conditions for moderate and even locally heavy movements. Northern New England will continue to experience moderate movements into the weekend, as the remainder of the region experiences greatly diminished movements. By early in the week, a dissociating tropical system brings southerly flow to much of the region East of the Ohio River valley, where migration will be scant. This system will likely deposit most of its entrained and displaced birds much farther South, but birders East of the Appalachians should be vigilant from mid-to-late week for potential strays still associated with the system (e.g. frigatebirds). Farther to the West, a pulse of moderate and heavy movements will occur in much more favorable conditions early in the week. This general pattern of more movement to the West continues on Tuesday night, with a gradual shift eastward in the distribution of bird movements, until Wednesday and Thursday nights when much of the region East of the Mississippi will experience moderate to heavy flights. The week ends with only coastal flights, as the remainder of the region begins to experience the circulation around a strong low moving through the center of the country. Birds on the move this week will include Turkey Vulture, Chimney Swift, Northern Flicker, Red-eyed Vireo, Golden-crowned and Ruby-crowned Kinglets, Hermit Thrush, Gray Catbird, Magnolia, Blackpoll, Black-throated Green and Yellow-rumped Warblers, Red-winged Blackbird, White-crowned and White-throated Sparrows, Dark-eyed Junco, Purple Finch, and Pine Siskin.

Limited movements occur to begin the period, as southerly flow prevails keeping migration light and scattered. Some portions of the coastal plain in the Southeast and Florida Peninsula may experience slightly higher densities in more easterly flow. Most of the region does not experience much change by Saturday night, but Texas begins to experience moderate to heavy movements in more favorable conditions. Tropical Storm Karen makes landfall by Sunday; in its wake come more moderate to heavy movements West of the Mississippi, and in its path movements shut down. Although safety is priority number one, birders should watch all coastal and inland bodies of water and any open expanses of ground for entrained and displaced birds associated with Karen on Monday and Tuesday as the system moves North and East. The most likely areas for storm birds to dropout are from the eastern portion of the Florida Panhandle North and East of the Appalachians in Georgia and portions of the inland Carolinas. After the storms passage comes several nights of favorable conditions for much of the region East of the Mississippi, with moderate to heavy movements likely in many areas during this period. Some of these movements may be locally very heavy, given the time of year and the favorable forecast. Birds on the move this week will include Double-crested Cormorant, Ruby-throated Hummingbird, Chimney Swift, Yellow-bellied Sapsucker, Eastern Phoebe, House Wren, Golden-crowned and Ruby-crowned Kinglets, Hermit Thrush, Yellow-rumped Warbler, Savannah, Swamp, and White-throated Sparrows, and Dark-eyed Junco. 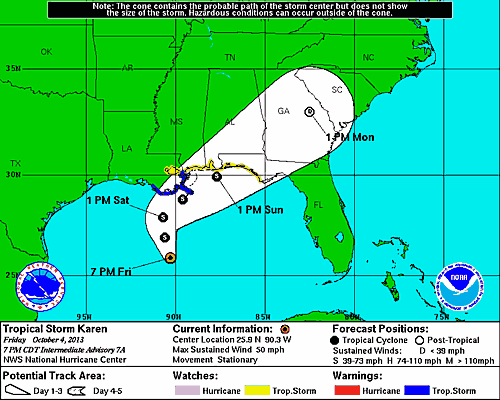 Tropical Storm Karen is forecast to move ashore along the eastern Gulf Coast late on Sunday and early on Monday. This system is forecast to dissociate and get absorbed into the low moving through the central Mississippi River valley early-to-midweek. As this system comes ashore, there is a good chance that it will bring typical near shore Gulf of Mexico species inland, both as displaced birds that are driven inland and as entrained birds that are actually associated with the remaining circulation. With safety as the number one priority, birders should watch carefully in inland bodies of water, in particular, for species like Magnificent Frigatebird, Bridled and Sooty Terns, and Pomarine Jaeger, among others. Additionally, there is also potential for some overland migrant waterbirds to fallout as the system passes, so birder should be watchful for waterfowl and shorebirds during checks of inland locations.