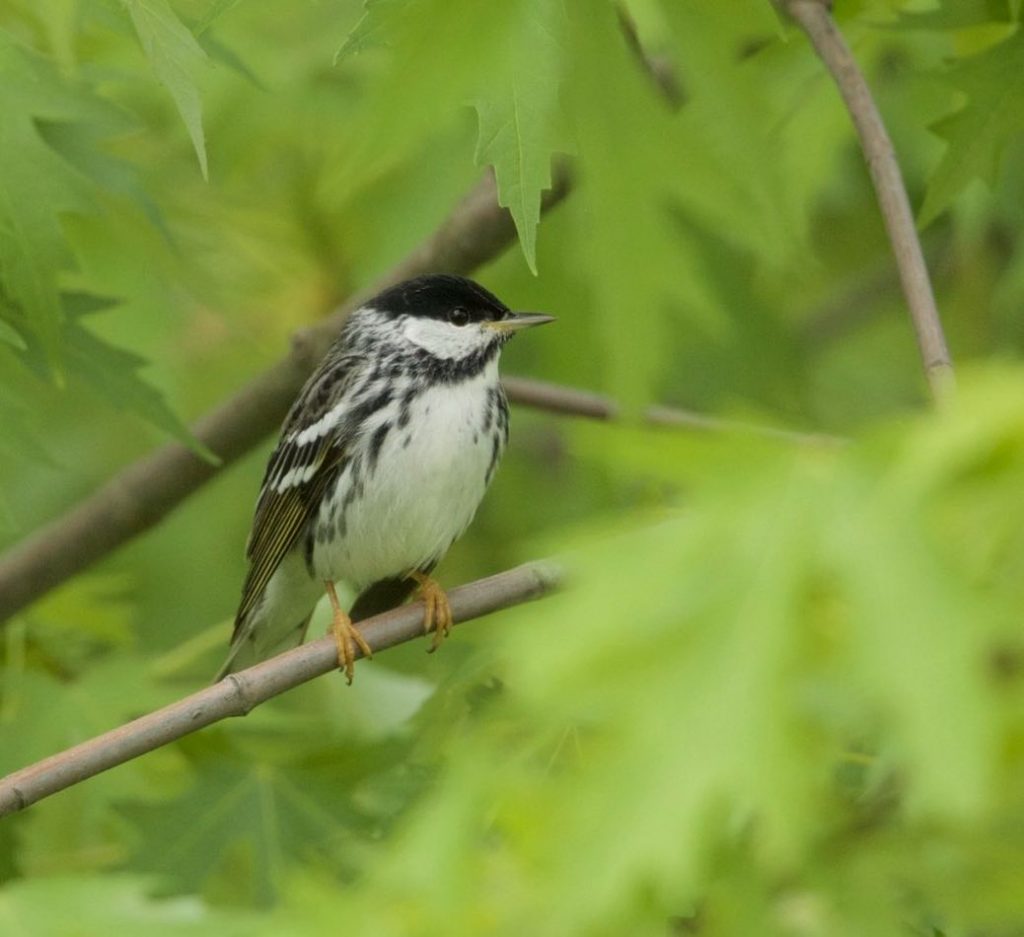 Favorable migration conditions early in the period bring light moderate flights to many areas of the West away from the Pacific Coast that will feature Dusky Flycatcher, Cedar Waxwing, Yellow-breasted Chat, Bullock’s Oriole, Chipping Sparrow, while the East will see locally moderate to very heavy flights featuring Short-billed Dowitcher, Black Tern, Red-headed Woodpecker, Olive-sided Flycatcher, Eastern Kingbird, Swainson’s Thrush, Canada Warbler, Common Yellowthroat, and Orchard Oriole in mostly marginal migration conditions that in many areas will hinder or inhibit migration. The second half of the period will see the best chance for more trans-Gulf migration as well as another opportunity for fallouts and concentrations with a passing frontal boundary.

The first half of the period will see localized pockets of marginal to favorable migration conditions mostly along the immediate coast and New England, where light to locally heavy movements will occur. Those with an interest in flight calls should consider listening during these periods if movements are occurring, as low visibility in conjunction with artificial lighting can inspire significant calling activity. The extent and intensity of these early period movements will be determined largely by the extent of precipitation and speed of unfavorable winds aloft. Birders in these areas should also be watchful for some migrant overshoots, birds entrained in the passing low pressure system (see our brief discussion here). The latter half of the period will see even more restricted movements, as generally unfavorable conditions build into the region, including opposing winds and unseasonably cool temperatures. Note, however, that subtle changes in these factors, especially calmer than expected wind conditions, can allow significantly higher intensity movements to occur.

Birders in New England and the Canadian Maritimes should watch carefully as atmospheric circulation across the North Atlantic is forecast to begin to change markedly, with more easterly flow forecast in the coming week. This could lead to the arrival of European Golden-Plover, Black-tailed Godwit, and other European vagrants in these areas. 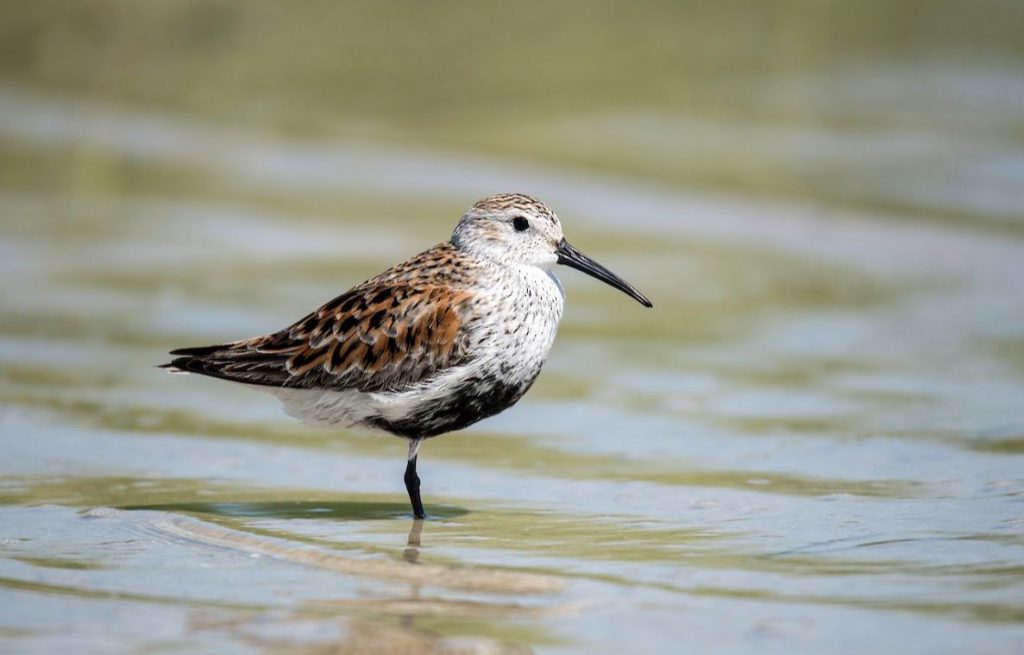 With a strong frontal boundary departing the region to kick off the weekend, most of the region east of the Mississippi River will experience a relative dearth of birds for the first half of the period. Light to locally moderate movements will be the norm, although heavier than expected flights may occur in calmer conditions, particularly in Florida and the southeast. To the west of the Mississippi River, conditions are more favorable, with moderate to heavy flights likely, increasingly so, through the first half of the period. By Wednesday the entire region begins to experience more favorable conditions, with moderate to heavy flights widespread in the region and trans-Gulf movements in full swing. The period ends with another frontal passage with potential to produce more fallouts and concentrations, particularly in the eastern Gulf region. 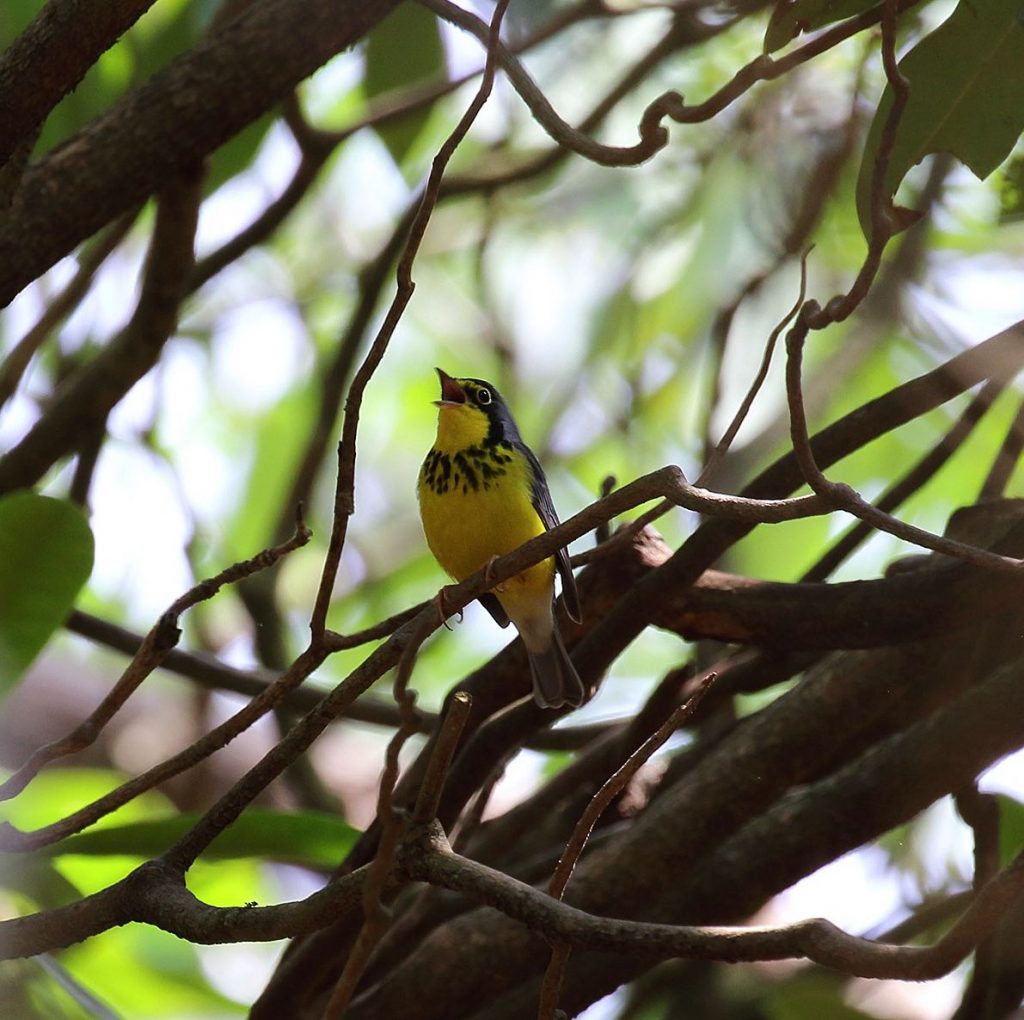 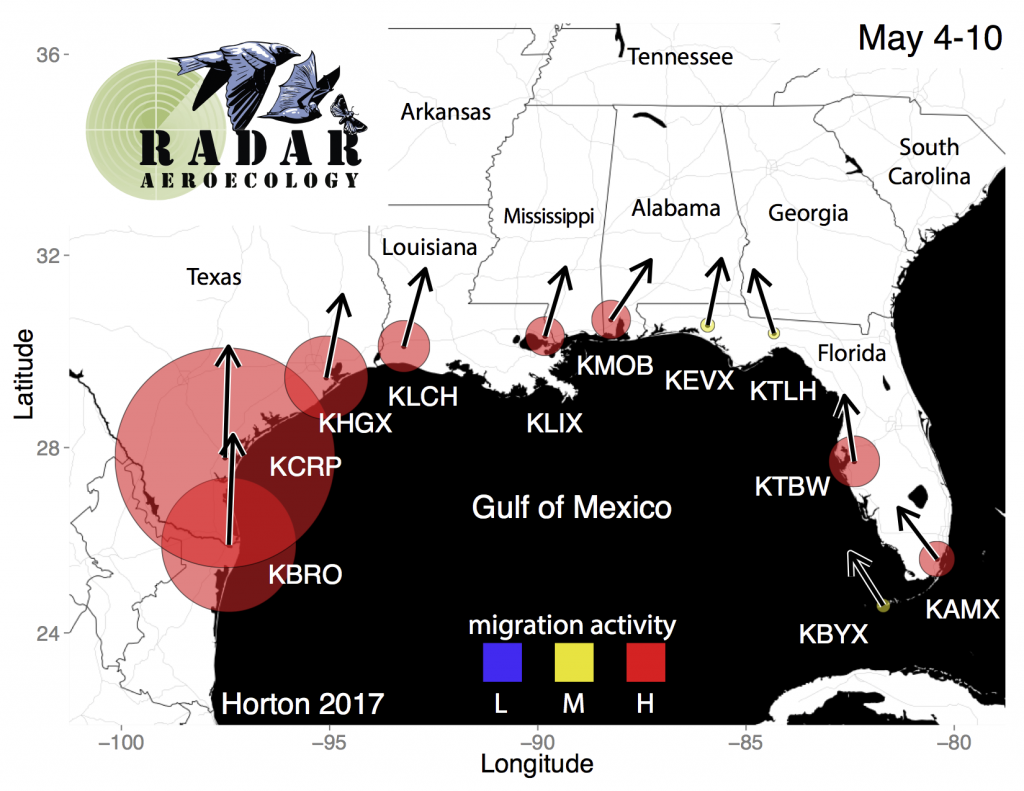 Weekly mean spring nocturnal migration activity and direction of movement in the Gulf of Mexico region for the week of 4-10 May, 1995 to 2015. Circular buffers around radar stations represent migration activity scaled to radar reflectivity (a measure of biological activity), with weekly activity represented by size scaled to the activity at KCRP Corpus Christi and seasonal activity represented by colors scaled to the most intense movements of the spring period (L: light, M: moderate, H:heavy); arrows represent mean track direction (a measure of the direction birds are traveling) derived from radial velocity.

After a slow start to the weekend, moderate to locally very heavy flights are likely for the days that follow. By Tuesday night, as a disturbance moves into the central Plains, more southerly areas will continue to experience good migration conditions whereas more northerly areas will start to experience much less favorable conditions. These less favorable conditions become more widespread to end the period, with migration diminishing in intensity and extent; movements will be mostly light to locally moderate. Note that some more westerly areas of the Plains may see higher than expected intensities, particularly in the central and northern areas. 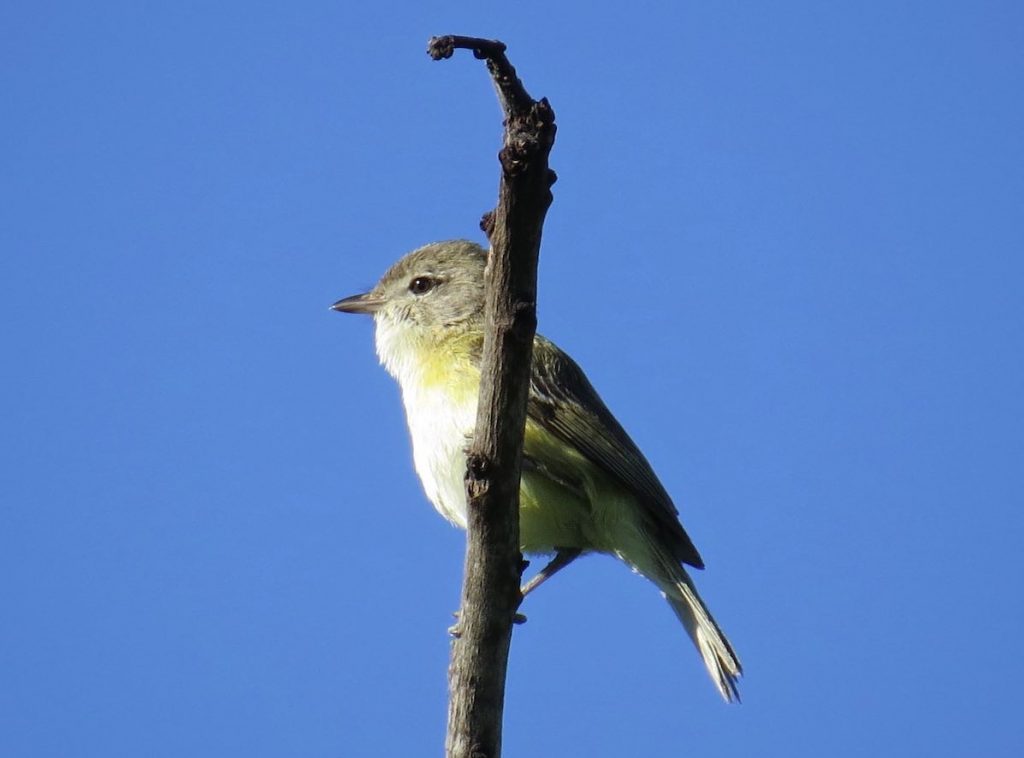 The weekend will bring moderate flights in many areas, though mostly east of Pacific Coast and coastal ranges. Some of these flights, particularly east of the Rockies and in portions of the Desert Southwest, may be heavy. As the work week begins, these favorable migration conditions will become increasingly restricted to the southern Rockies and Desert Southwest, with similarly intense movements continuing. However, by Wednesday favorable migration conditions appear in almost an opposite pattern, with portions of the Pacific Coast and northern Rockies seeing light to moderate flights in contrast to a much quieter Desert Southwest. To end the week, a pattern between these extremes emerges and scattered light to moderate flights are likely in a number of areas; but most of the activity will be east of the Continental Divide. 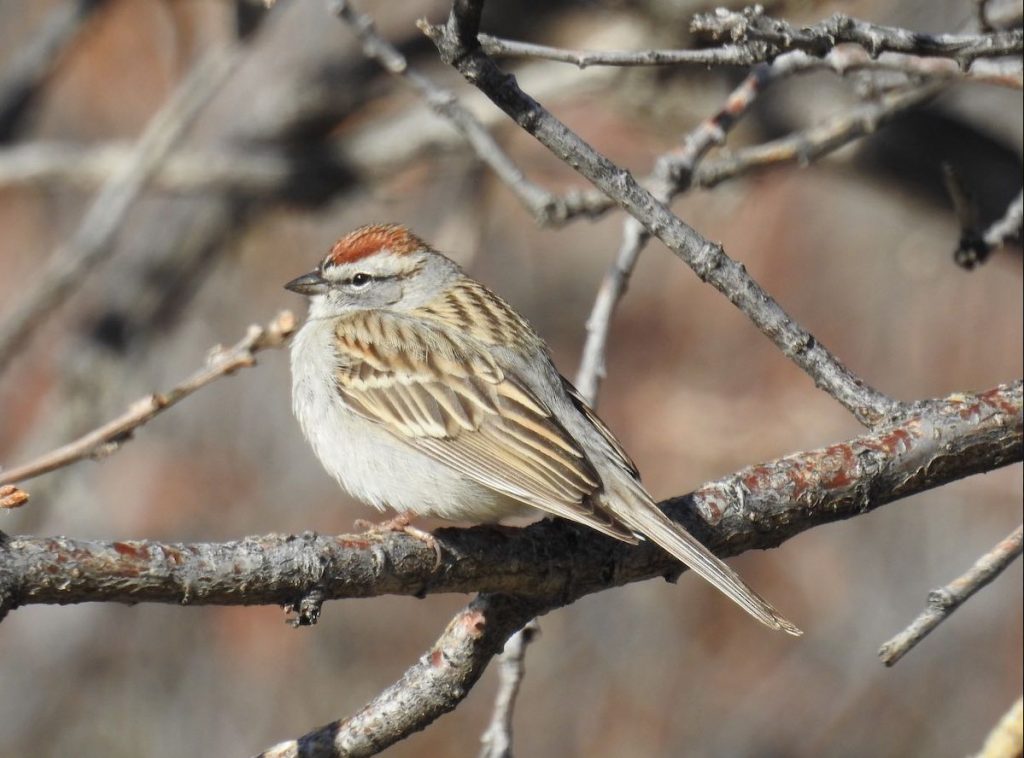