Although winter’s clutches continue to grip some parts of the country, signs of early spring movements and those to come later are appearing daily. For example, Northern Parulas are right on time in the southeastern US, as seen in the image below showing the daily changes in the frequencies of occurrence for these species from complete checklists submitted to eBird. 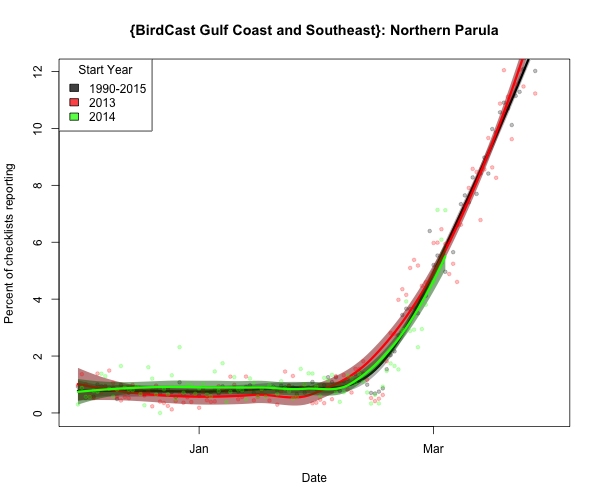 Also on the move are the first American Golden-Plovers, appearing in small numbers of the past week or two in Texas and Louisiana. The image below shows eBird sightings of the species in the last two weeks (orange balloons). 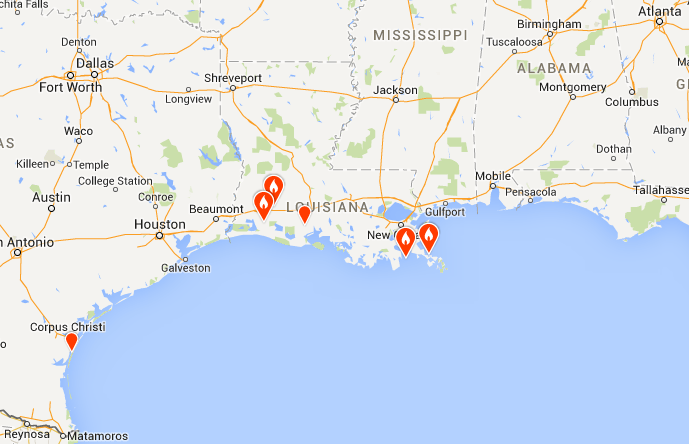 So to BirdCast is on the move, and with this post we begin the first of our weekly forecasts and analyses of regional migration across the continental US.

Nights with favorable winds and clear skies, particularly in the middle of the coming work week, will facilitate the early migrants’ movements. Light to moderate migration will be scattered across the region this week, most evident in the Desert Southwest early in the period and at more regional scales by Wednesday night. Species on the move this week will include Lucy’s Warbler, Western Kingbird, Barn Swallow, Rufous Hummingbird, Violet-green Swallow, Cliff Swallow, Hooded Oriole, Wilson’s Warbler, Black-chinned Hummingbird, Bell’s Vireo, Turkey Vulture, Bullock’s Oriole, Warbling Vireo, and Pacific-slope Flycatcher.

Pulses of southerly flow will spawn moderate movements for all but the end of the forecast period next Friday. The central and southern Plains experience these movements early in the period, before they become more widespread from Tuesday through Thursday nights. Species on the move this week will include Eastern Phoebe, Sandhill Crane, Common Grackle, Blue-winged Teal, American Golden-Plover, Killdeer, American Woodcock, Western Meadowlark, California Gull, Greater Yellowlegs, Northern Harrier, Pectoral Sandpiper, Tree Swallow, and Whooping Crane.

Favorable, marginal and unfavorable conditions are all likely during the coming week, alternately spawning and inhibiting early migrants’ movements. Weekend and early week nights will see the most extensive and intense movements, probably primarily light to moderate flights. Thursday night will also see such movements, through primarily in the western Great Lakes and Upper Mississippi River valley. Several days, especially early in the week, will be favorable for diurnal migration, so skywatching could be  fruitful on Saturday and Tuesday in particular. A major storm system moves into the region to end the forecast period, likely shutting down many movements with extensive precipitation – however, birders should watch for waterbird concentrations and fallouts associated with the passage of this system. Species on the move this week will include Tree Swallow, Eastern Phoebe, Killdeer, Common Grackle, Osprey, Wood Duck, American Woodcock, Red-winged Blackbird, Brown-headed Cowbird, Laughing Gull, Blue-winged Teal, Eastern Meadowlark, American Robin, Green-winged Teal, and Song Sparrow.