The forecast period begins with scattered favorable conditions (e.g. northerly winds, clear skies) across the region, in which light to moderate movements will occur. By Wednesday evening changes begin to appear, and more extensive northerly flow takes hold for the remainder of the period from the Pacific Northwest through the eastern and central Rockies. When this change occurs, movements will become more extensive, though continuing in intensity as light to moderate. Species on the move this week will include Wood Duck, Northern Shoveler, Green-winged Teal, Solitary Sandpiper, Lesser Yellowlegs, Baird’s Sandpiper, Least Sandpiper, Red-necked Phalarope, Orange-crowned Warbler, Nashville Warbler, MacGillivray’s Warbler, Yellow Warbler, Townsend’s Warbler, and Wilson’s Warbler. 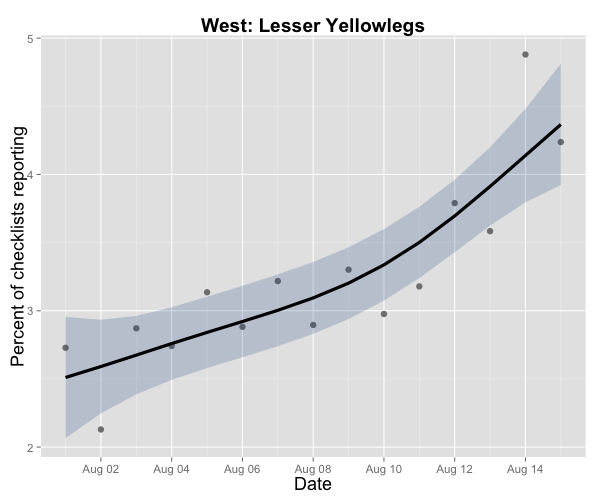 Shorebird migration is in full swing across the country, shown here with Lesser Yellowlegs using eBird data from 2004-2013. 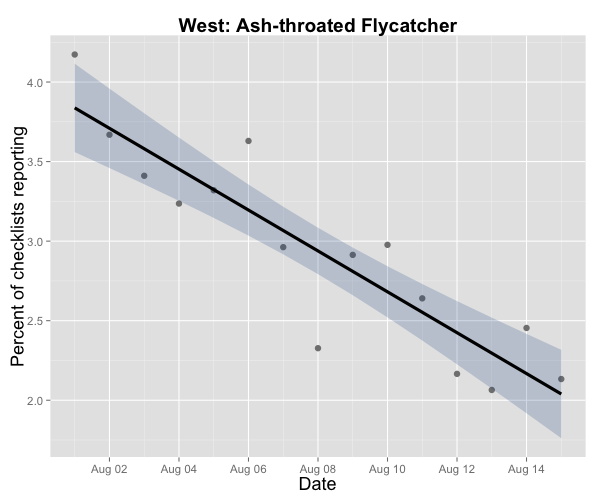 Alas, summer visitors like Ash-throated Flycatcher are trickling back to more southerly haunts. But look for this species to turn up in weird places (e.g., the Northeast) later in fall! eBird data from 2004-2013.

A late weekend and early week burst of northerly flow and primarily clear skies spawns moderate movements over portions of the northern and central Plains. The distribution of these favorable conditions gradually shifts south and east across the region, as do the movements tracking these conditions, before return flow reappears mid to late week with warmer temperatures and unfavorable winds muting movements over much of the region. A more organized frontal passage arrives to end the forecast period, with a pulse of moderate movements in the northern and central Plains. Species on the move this week will include Ruby-throated Hummingbird, Olive-sided Flycatcher, Least Flycatcher, Loggerhead Shrike, Chestnut-collared Longspur, Black-and-white Warbler, American Redstart, Wilson’s Warbler, Vesper Sparrow, Blue Grosbeak, and Baltimore Oriole. 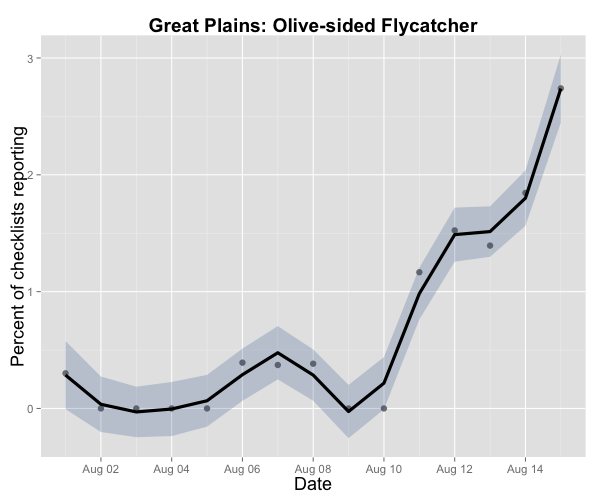 Olive-sided Flycatchers are poised to begin moving south in the Plains region as well as in most other parts of the country. eBird data from 2004-2013.

A patchwork of favorable and unfavorable conditions blankets the region for the weekend and early week, with those areas with northerly flow and clear skies experiencing light to moderate movements and other areas experiencing virtually no movement in scattered precipitation and southerly winds. As a frontal boundary develops and pushes through the region by Tuesday night, more favorable conditions occur over a more widespread area from the Great Lakes to the Appalachians, spawning larger movements. Some of these may be locally heavy. These movements expand over much of the region as favorable conditions spread with the movement of the air mass to the east. However, by the end of the week, southerly flow returns to many areas away from New York and New England, keeping movements light where it occurs. Species on the move this week will include Blue-winged Teal, Black-bellied Plover, Common Nighthawk, Olive-sided Flycatcher, Least Flycatcher, Blue-winged Warbler, Black-and-white Warbler, American Redstart, Blackburnian Warbler, Chestnut-sided Warbler, Canada Warbler, Wilson’s Warbler, Bobolink, and Baltimore Oriole. 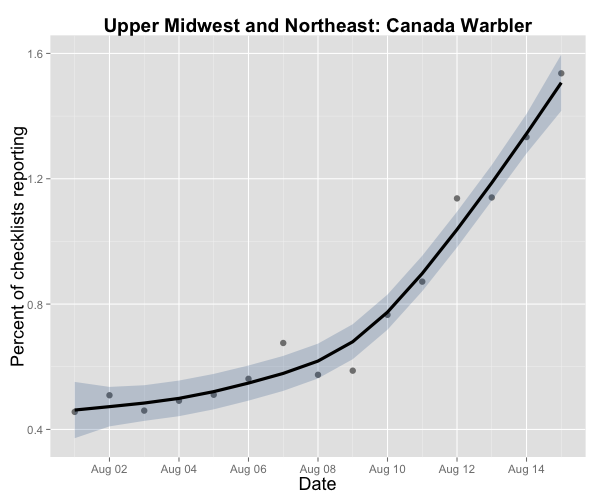 The Upper Midwest/Northeast region is about to see an influx of Canada Warblers and many other boreal migrants. eBird data from 2004-2013. 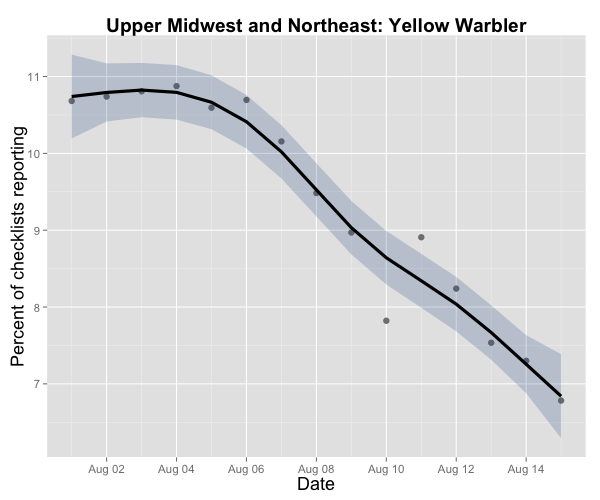 At the same time, Yellow Warblers — generally quite early migrants — are already past their peak! Where are they going? See below… eBird data from 2004-2013.

Generally marginal and unfavorable conditions are in place over much of the region for this forecast period, and movements will be light to locally moderate where the more favorable conditions occur. By the end of the period, probably on Wednesday and Thursday nights, more extensive moderate movements will occur as northerly flow facilitates flights in many inland areas east of the Mississippi River. Species on the move this week will include Blue-winged Teal, Black-bellied Plover, Upland Sandpiper, Olive-sided Flycatcher, Yellow-bellied Flycatcher, Alder Flycatcher, Least Flycatcher, Northern Waterthrush, and Yellow Warbler. 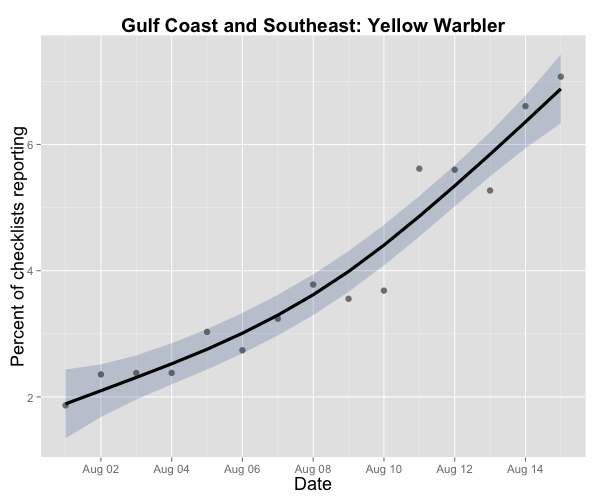 Well, all the Yellow Warblers leaving the north have to go somewhere — and they’ll be showing up in the Southeast soon, en route to neotropical wintering grounds. eBird data from 2004-2013.