ANN ARBOR—Birds that produce faint chirps called flight calls during nighttime migration collide with illuminated buildings much more often than closely related species that don’t produce such calls, according to a new analysis of a 40-year record of thousands of building collisions in the Midwest. The new analysis of more than 70,000 nighttime songbird collisions in Chicago and Cleveland suggests that birds disoriented by artificial light from illuminated buildings at night send out flight calls that may lure other nearby birds to their death. The study was published online April 3 in Proceedings of the Royal Society B.

The study relies on bird-collision data collected in Chicago by Field Museum researchers starting in 1978 and, more recently, by volunteer groups in Chicago and Cleveland. 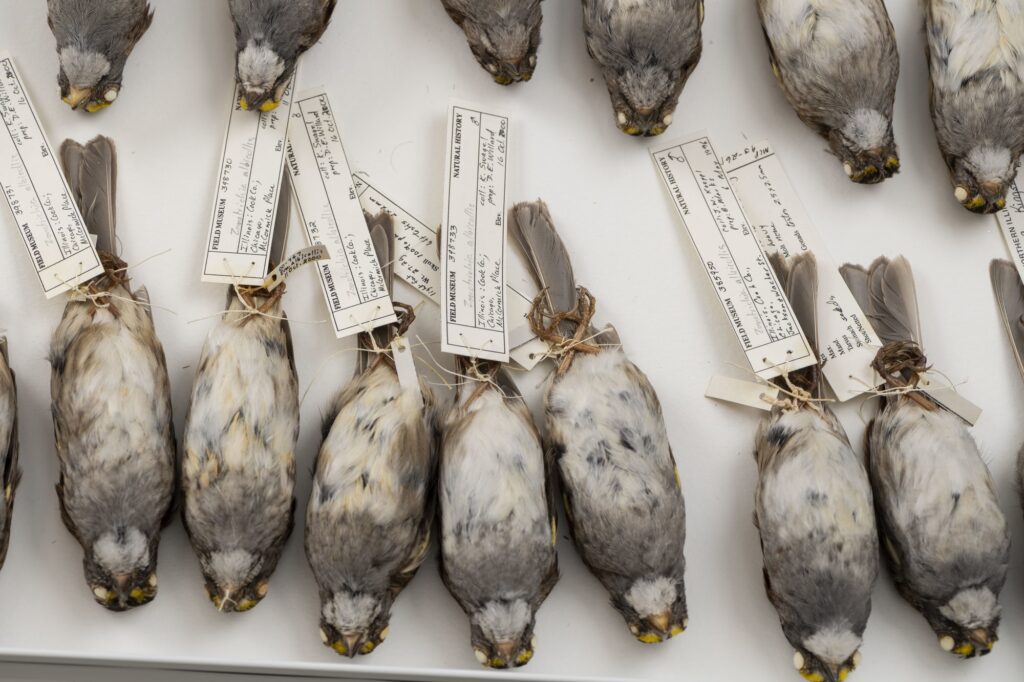 White-throated sparrows that were part of a large University of Michigan-led study of nighttime building collisions in the Midwest. The new analysis of more than 70,000 nighttime songbird collisions in Chicago and Cleveland suggests that birds disoriented by artificial light from illuminated buildings send out flight calls that may lure other nearby birds to their death. Image credit: Roger Hart/University of Michigan Photography

Although the collision-monitoring efforts cited in this study have led directly to reductions in light pollution in Chicago in recent years, the new findings show that more needs to be done, according to the paper’s authors.

“Our results underscore the critical importance for bird conservation of reducing artificial light at night from buildings and other structures during migratory periods,” they wrote.

In addition to conducting a broad regional analysis of collision frequencies, the researchers analyzed data from Chicago’s lakefront convention center, which is known to be a hazard to migratory birds. They found that when more lights were left on at night during migration, more birds collided with the convention center and died.

Although the convention center remains one of the most dangerous buildings in Chicago for night-migrating birds, changes in its light regime have resulted in a 75-percent reduction in bird fatalities since I started monitoring in 1978. Our new analysis shows that implementing further reductions in light here and elsewhere in Chicago will help greatly to reduce bird fatalities.

Long-distance bird migration is one of the most impressive feats in the animal kingdom. But many bird species migrate at night, which makes direct observation of migrating individuals difficult. Many aspects of these arduous seasonal treks remain shrouded in mystery. When flying at night, many migratory bird species produce short vocalizations known as flight calls. Scientists suspect that these faint, high-frequency calls are signals that help the group with orientation, navigation and other collective decisions. To investigate the importance of flight calls as social cues for collective decision-making, Winger and his colleagues examined the relationship between flight calling and responses to a highly disruptive stimulus: artificial light at night. 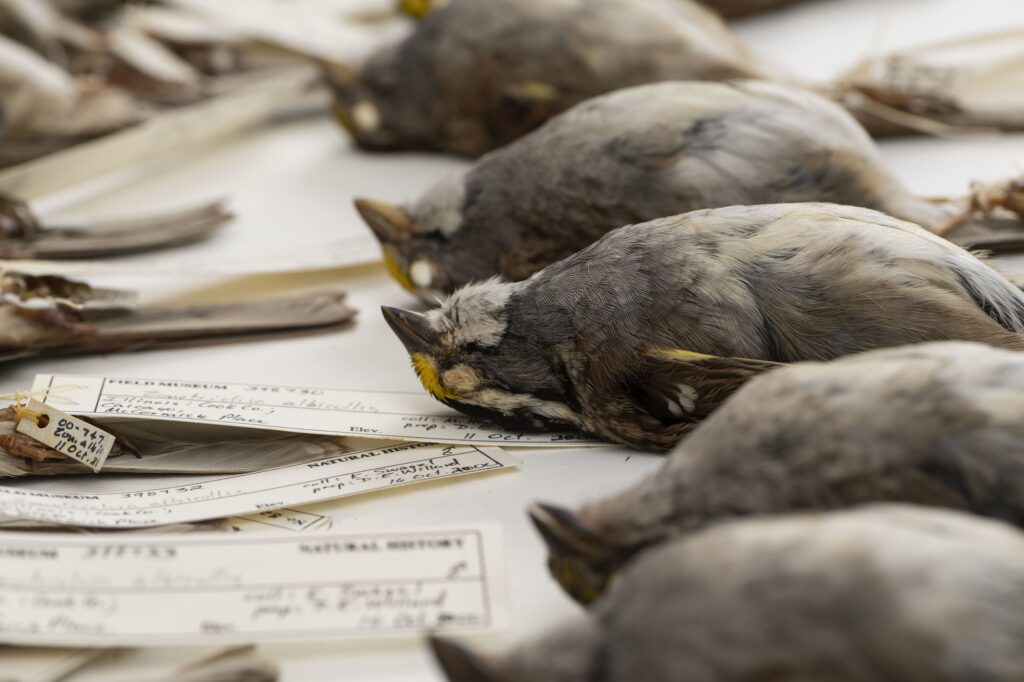 White-throated sparrows that were part of a large University of Michigan-led study of nighttime building collisions in the Midwest. These birds died after colliding with buildings in Chicago and were collected by researchers at the Field Museum. Image credit: Roger Hart/University of Michigan Photography

Birds and many other types of organisms are drawn toward light sources, a response called a phototaxis. Subsequent nighttime collisions with lighted structures are a major cause of avian mortality. Scientists suspect the glare disorients migrating birds. Birds navigate during migration in part by sensing the Earth’s magnetic field, and some scientists have speculated that artificial light may disrupt a light-sensitive internal magnetic compass. Previous studies have demonstrated that rates of nocturnal flight calls increase when migratory groups fly over brightly lighted cities, as compared to unlit areas, suggesting that the birds react to the light stimulus by vocalizing.

In the new study, Winger and his colleagues used existing collision-monitoring data from Chicago and Cleveland to test the influence of flight-calling behavior on nighttime building collision rates. The Chicago collision dataset includes nearly 70,000 records from 93 species, all of them small-bodied songbirds that migrate predominantly at night. These species all breed north of Chicago during the summer and migrate through the region in high numbers. Willard started the monitoring project in 1978. In 2002, the Chicago Bird Collision Monitors, a volunteer network, began collecting collision data throughout downtown Chicago. Collision monitoring began in 2017 in downtown Cleveland, and that dataset is much smaller.

“Our paper provides some of the strongest published evidence on the effect of artificial light on bird collisions in urban areas, though this relationship has been known anecdotally for a long time,” said Winger, an assistant professor in the U-M Department of Ecology and Evolutionary Biology and an assistant curator at the Museum of Zoology. 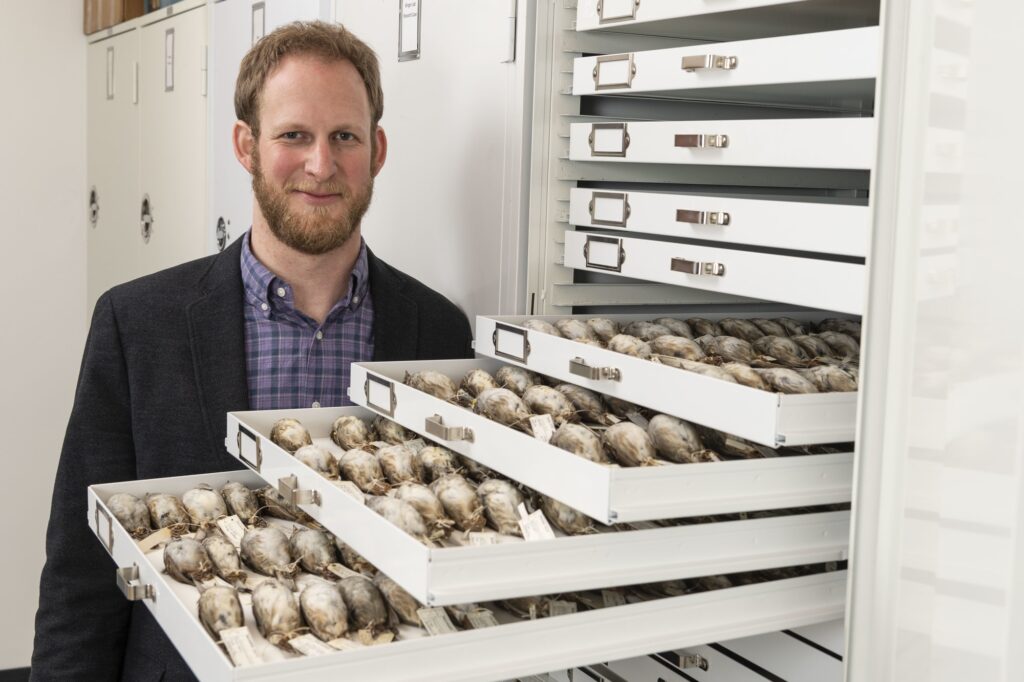 Several species of sparrow, warbler and thrush make up the majority of the Chicago collision dataset, with thousands of individuals of each species documented as lethal collisions. These species are known informally to scientists as “super collider” species because of their high collision rates. The collision records were compared with data from the eBird database on the local abundance of various migrating songbird species in Chicago and Cleveland during the spring and fall. Co-author Andrew Farnsworth of the Cornell Laboratory of Ornithology has studied flight calls for decades and provided expert knowledge on which species produce flight calls and which don’t. Both Chicago and Cleveland are situated along a major north-south migratory bird flyway. A recent study using satellite data found that illuminated buildings in Chicago collectively expose migrating birds to more artificial light than any other U.S. city.

“We hypothesized that if flight calls are important social cues for decision-making during nocturnal migration, individuals from species that make flight calls may attract one another vocally when disoriented by artificial light,” the authors of the new study wrote. “This relationship may spawn a vicious cycle of increased mortality rates if disoriented individuals lead other migrating individuals to sources of artificial light.”

Winger and his colleagues found that all species that were overrepresented in the collision datasets—the super colliders—use flight calls, while all species that do not use flight calls were underrepresented in the collision datasets. They concluded that flight-calling behavior is a significant predictor of collision frequency. The Chicago convention center dataset also showed that, among night-calling migratory bird species, the number of collisions on a given night correlated positively with the amount of artificial light originating from the building. Bird species that do not use flight calls collided less frequently overall, and nighttime light levels at the convention center had no significant effect on their collision counts.

To date, we have not mined the potential information that flight calls could provide to advance our understanding of how nocturnally migrating birds make decisions and orient in difficult situations. This work heralds a new direction in the integration of data on collisions, species distributions and behavior ecology for understanding nocturnal bird migration.

The work reported in Proceeding of the Royal Society B is one of the first comparative studies of avian social behavior during nocturnal migration. The other authors of the study, in addition to Winger, Willard and Farnsworth, are Brian Weeks, a postdoctoral researcher in the U-M Department of Ecology and Evolutionary Biology, Andrew Jones of the Cleveland Museum of Natural History and Mary Hennen of the Field Museum.

The authors thank the Chicago Bird Collision Monitors and Lights Out Cleveland for their efforts in monitoring bird-building collisions and for salvaging specimens. The study was funded, in part, by the Leon Levy Foundation and the National Science Foundation.