2014 may be a year to remember for linking bird movements to patterns of sea surface temperature (SST) anomalies. Many along the Atlantic and Gulf Coasts will certainly remember the winter of 2012-2013 for, among other reasons, the crazy Razorbill invasion in the southeastern US and Florida, and even into the Gulf of Mexico and its presumed ties to SST anomalies. Although that wackiness is not apparent this year for Razorbill, the winter of 2013-2014 saw substantial wrecks (when numbers of birds come ashore, either as carcasses or alive and generally in poor condition) of Northern Fulmars along the Pacific coast. These followed the epic invasion of Blue-footed Boobies to the Pacific Coast of the US in the second half of 2013. Numbers of fulmars were reported and collected along California shorelines (see this bird rescuer posting, as well as this post and this post), and these are substantially larger numbers than previous years. Look at the differences in eBird observations for January 2014, 2013, 2012, 2011, and 2010. Changes and anomalies in sea surface temperatures are often useful metrics for understanding larger scale climatological patterns, in particular the occurrence of certain cyclic patterns that dominate global and regional weather. And in turn, these patterns may have drastic effects on seabirds, in particular. 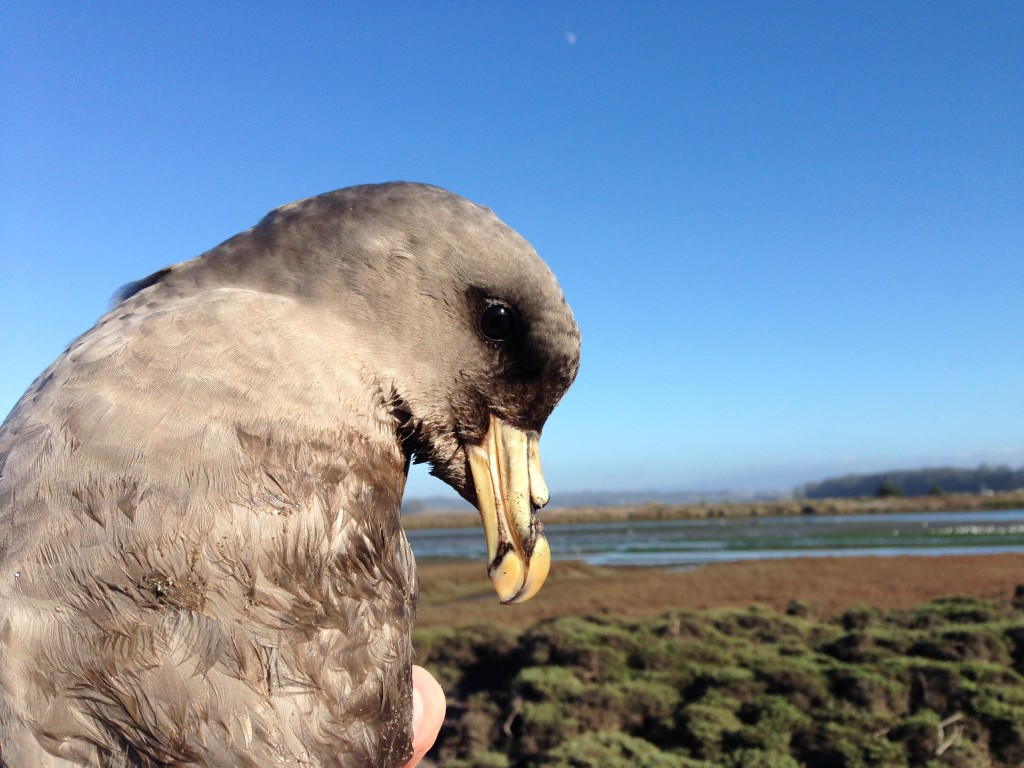 The El Niño Southern Oscillation (ENSO) refers to the cyclic warming and cooling in sea surface temperatures in the central and east-central Pacific Ocean. These changes correspond to wide variations in rainfall, surface pressure, and atmospheric circulation in the equatorial Pacific Ocean, which in turn affect the patterns of tropical rainfall from Indonesia to the west coast of South America and then affect weather patterns throughout the world. El Niño represents warm phase of the ENSO cycle, whereas La Niña represents the cold phase. NOAA’s Climate Prediction Center (CPC) declares the onset of an El Niño episode when the 3-month average sea-surface temperature departure exceeds 0.5oC in the east-central equatorial Pacific.

Seabirds (and other birds) respond to ENSO cycles, and their movements can be summarized most easily by thinking about birds dispersing in search of food. In El Niño portions of the ENSO cycle, warm water dominates the normally cold currents off the South American coast, creating a major trophic shake up: cold water fish either perish or flee the warm temperatures, and countless seabirds that rely on these food resources follow suite (and perish or flee in search of food). Ridgely (1981), Reed (1988), and Smith 1990 (in a chapter in Gwynn 1990) describe a huge invasion into the Gulf of Panama of Inca Terns, Peruvian Boobies, and Guanay Cormorants following 1982-1983 ENSO events. These birds were presumably searching for their cold water fish of choice, which has long since departed the El Niño-warmed waters off the South American coast. Although CPC has yet to declare an El Niño event, an increasing number of researchers and meteorologists are highlighting signs that such an event materializing by spring/summer 2014 (Jeff Masters at Weather Underground posted on this as did The Weather Centre). The graphic below shows the sea surface temperature anomaly map for mid March. The pattern of above normal temperatures in the western Pacific and the disparity between anomalously warm and anomalously cool temperatures from west to east in the equatorial Pacific hints at the formation of an oceanic Kelvin wave, which a slow-moving deep ocean wave that could shift warm temperatures to the eastern Pacific and kick off an El Niño phase of ENSO. This could happen in the next 1-2 months, with effects becoming increasingly apparent by May and June. Early prognostications suggest potential for a strong response, in the form of a “Super El Niño.”

One might expect birds to respond to ENSO changes more quickly than humans do (birds are better forecasters than we are!), and perhaps we are already seeing this: there is a 1 February 2014 report of Inca Tern. However, perhaps we are simply seeing a more normal pattern of occurrence in this species that has gone largely undetected because of a lack of coverage, similar to the case for Swallow-tailed Gull occurrences off the Central American Pacific coast. Regardless, the current outlook continues to call for neutral conditions through the spring, but there is increasing evidence that El Niño is coming by late spring or early summer. If this happens, we should begin to see more and more seabirds moving out of range as SST anomalies start to wreak havoc on trophic communities.

Of course, seabirds are not the only species that feel the effects of ENSO. Taking a quick look at potential ramifications for severe weather in the US tells us that, depending on its onset, ENSO phases could have dramatic bearing on the passage of migrants into and through the US. The map below was posted on and links to The Weather Centre (an excellent source of information for long-range forecasts), and shows some of the potential effects for an El Niño phase on storm tracks and general conditions in the US. If an El Niño phase begins in May, it is possible that later migrating intra- and intercontinental migrants may see some rather unfavorable conditions for movements into and through the US. 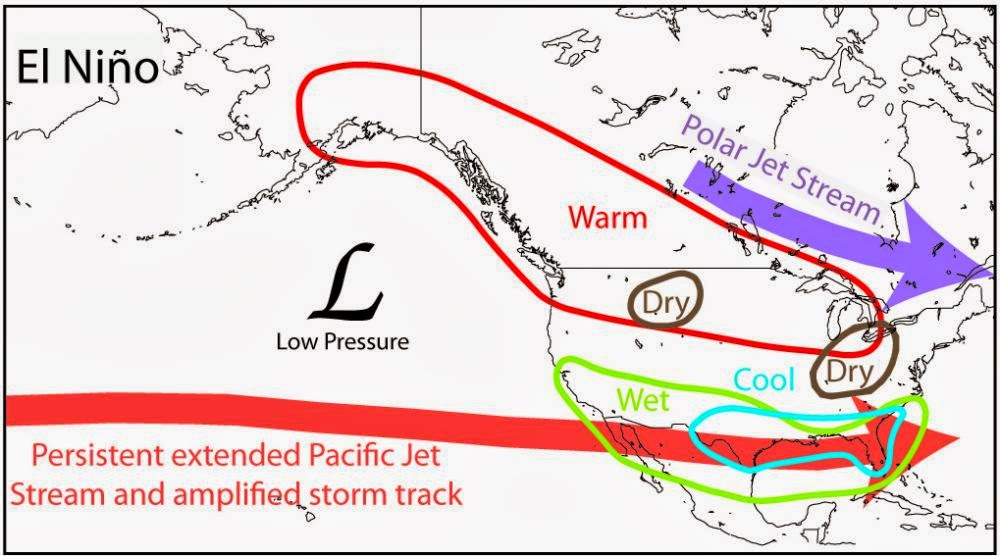