Team BirdCast wrote in November 2014 about Varied Thrush movements in the western US. Since November, the actual movements (or at least visible movements like morning flights) of these thrushes may have dwindled, but the birds – in terms of where they ended up after fall movements and are at present – are still highly visible. The following image, below, shows an example of this: 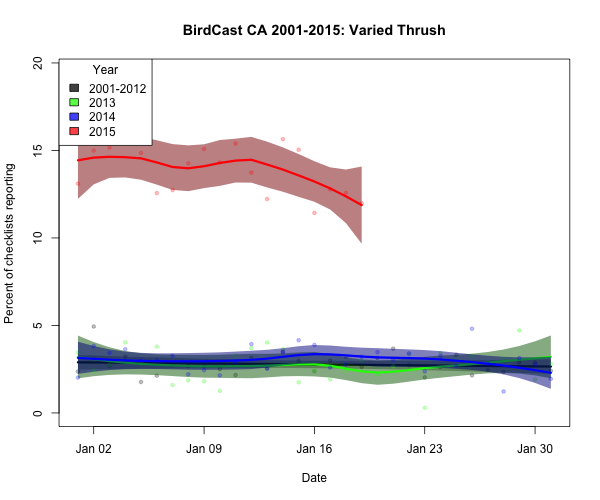 These data represent the daily changes in January frequency of occurrence (and its 95% confidence interval) from complete checklists to eBird for Varied Thrush in California. We can see that 2015 (red line) frequencies are more than three times higher that 2014 (blue), 2013 (green), and the 2001-2012 average (black). So Varied Thrushes continue to occur with much greater frequencies this January than in previous years (despite similar numbers of checklists submitted – not shown).

It is interesting to note that neighboring states to the north, Oregon and Washington, have experienced a very different pattern for frequencies of occurrence. 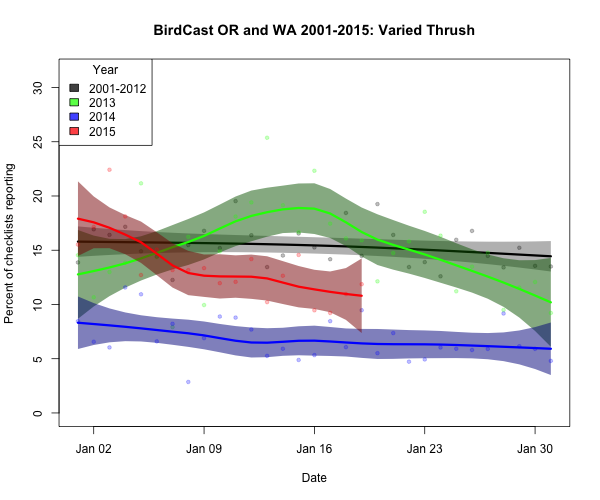 This year, the frequency of occurrence in Oregon and Washington were above those from last year, but primarily below the 2001-2012 average (black) and 2013 (green).

Does this coastal movement of birds from more northern and western locations toward the south into California have bearing on patterns of vagrancy in the eastern US? Perhaps, but perhaps not in ways that eastern birders will enjoy (unless they happen to be birding in California). This year, despite the large movements in California, relatively few reports of vagrant Varied Thrushes from the east have come in (check out November to January 2014-2015 against November to January 2012-2013).

And perhaps the more interesting question is what is the origin of all of these California birds? BirdCast will continue to investigate!