Fodder for discussion: brief notes on some late 2013 and early 2014 movements

Winter is not necessarily a season of the year that we associate with bird migration. This is for good reason, as the epic movements of spring and fall are not usually underway and nowhere do we find the diversity in northern hemisphere temperate latitudes of migrants passing that we expect and experience during those seasons. However, plenty of movement occurs during winter months, in particular irruptive and facultative movements. For example, many may remember the winter of 2012-2013 for its European flavor in the Eastern US, with a negative phase North Atlantic Oscillation (NAO) index and its easterly flow across the North Atlantic priming some European species for vagrancy in northeastern North America. This winter has no shortage of interesting patterns occurring, and Team BirdCast and Team eBird would like to touch upon those briefly here. So let’s begin . . .

Snowy Owl: much has been written of the epic Snowy Owl flight in portions of the eastern US this winter, including an eBird summary of the events that have so far transpired. The first signs of this movement began in November 2013, when much larger than average numbers of owls began appearing in the Canadian Maritimes. By late in the month, the first wave of owls was making headlines (literally: see this article in the NYT and this article) in even the greatest metropolitan areas of the Northeast. Numerous visuals show the distribution of these movements, and one project has sough to take advantage of this unique opportunity to track the movements of these birds (check out Project SNOWStorm). It appears that a combination of factors may be responsible for this season’s invasion, but the jury is still out as to what is causing this influx. Are these movements the results of an overabundance of rodent prey items in portions of eastern Canada yielding a bumper crop of young Snowy Owls that are dispersing en masse? Or is the movement we are seeing part of a much larger set of changes occurring in the Arctic related to rapidly changing climate? Recent publications, like this one by Therrien et al. (2011), highlight a pattern of northward winter movements to the sea ice edge where owls hunt wintering waterfowl, a pattern that could be seriously disrupted by rapid decreases in Arctic sea ice extent and anomalously warm sea temperatures. 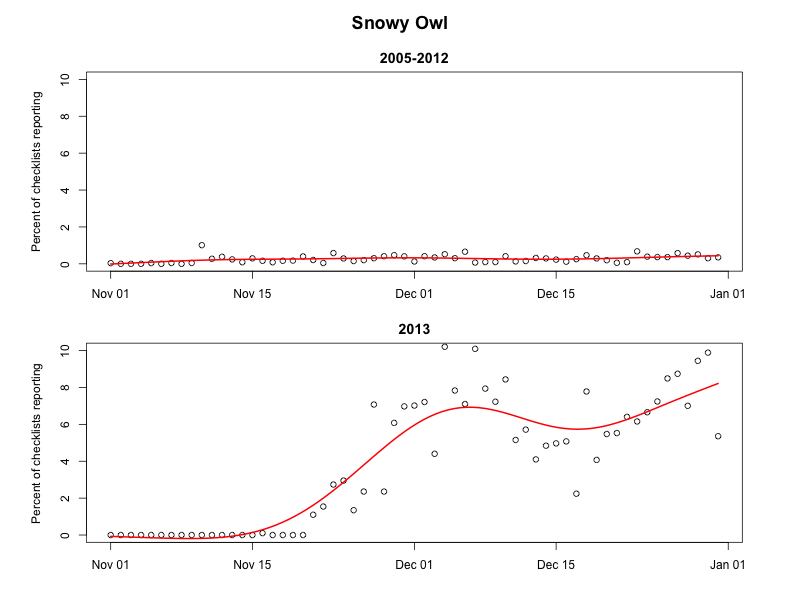 In the mid-Atlantic states, Snowy Owls have staged an unprecedented movement. Note the contrast between November/December from 2005-2012, and the same months in 2013. Data from MD, PA, VA, NY, and NJ.

“White-winged” Gulls: this appears to be a reasonably good year for Iceland and Glaucous Gulls, interestingly in both the western and eastern North Atlantic basins, though more so in the latter. Large numbers of Iceland and Glaucous Gulls are appearing in SW Europe and in New England (Iceland Gull; Glaucous Gull). The last time that a large influx of these gulls into more southerly areas occurred was in 2008-2009, which was also coincidentally a year in which North Atlantic Oscillation (NAO) and Arctic Oscillation (AO) indices were nearly neutral or very slightly in negative phase. Are influxes of these species in larger numbers farther south than typical tied to years with neutral to slightly negative phase AO index, when some areas of the Northern hemisphere polar regions are abnormally warm and a weakened and wobbly polar vortex allows some blasts of very cold air much farther south in more temperate latitudes (see this excellent article and this follow up)? One hypothesis would be that warmer than normal polar temperatures facilitates mass movements of gulls to points substantially farther south.

White-winged Scoter: there is some good discussion going on, most notably in recent Virginia list serve posts by Ned Brinkley and Ellison Orcutt, about winter movements of White-winged Scoter. There are some major differences among 2014, 2013, and 2012 in the distributions of this species in January that may relate to the percentage of available open water in the Great Lakes.

Red-necked Grebe: this species appears in large number on Lake Ontario in March, and occasionally some spectacular fallouts of this species (and others) occur on inland lakes and open areas that could look like lakes (like fields and even parking lots). Some early occurrences of this species on inland lakes and to the south of more normal winter haunts this year warrant some discussion of what’s happening here (check out the patterns for 2014, 2013, and 2012). Are more birders simply finding more grebes during searches of their local bodies of water? Are more grebes on the move, earlier than usual, in and/or from New England this year?

So, there are plenty of exciting patterns to consider, and the winter is still young (insert teeth chattering here). But all is not lost for those yearning for the pulses of spring migrants, and signs are appearing on the horizon, so to speak. Purple Martin numbers are slowly increasing through the end of this month and the beginning of February. Those in the Southeast, although still recovering from snow, ice, and much cooler than normal weather, should watch for more martins to appear in the coming weeks (certainly something to take one’s mind off the weather, or focus on some aspect of weather other than the buzz-worthy polar vortex wobbles). 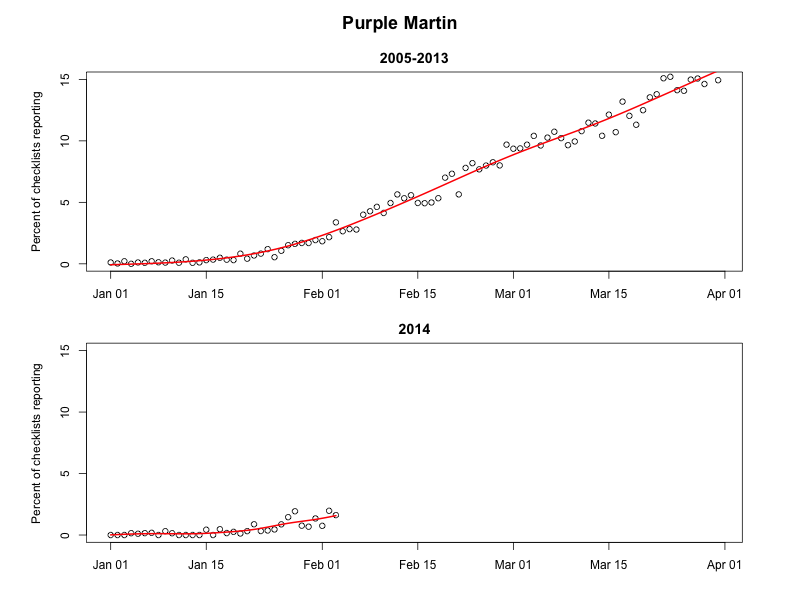 Purple Martins have begun arriving on the Gulf Coast! Here, data from TX, LA, and FL.