Team BirdCast is excited to debut daily reports of migration traffic rates in the northeast United States. Each night, from local sunset to local sunrise in the Eastern time zone, a BirdCast server downloads radar data from 16 stations in the northeastern US. These data are composed of every scan of the atmosphere made by these radars during this time period, with a particular focus in our case on radar reflectivity products representing the magnitude of targets (whether meteorological, like rain and hail, or biological, like birds, bats, and insects) at a given radar. A pipeline of algorithms extracts information from these radar data about birds, and the resulting bird-specific summary imagery is published daily in early afternoon eastern time (give or take).

For detailed information on the processing and quantification of radar data and the algorithms involved in this processing pipeline, please see our most recent publication in Ecological Applications (currently a preprint).

Migration over the last week

The region experienced its biggest movement of the season on the night of Sunday, September 20th. The y-axis of the graphs show “Traffic Rate,” the number of birds migrating over a 1 km line, each hour. This rate represents the number of birds at all altitudes from 0-3,000 meters above the radars passing a 1 km line drawn on the ground. 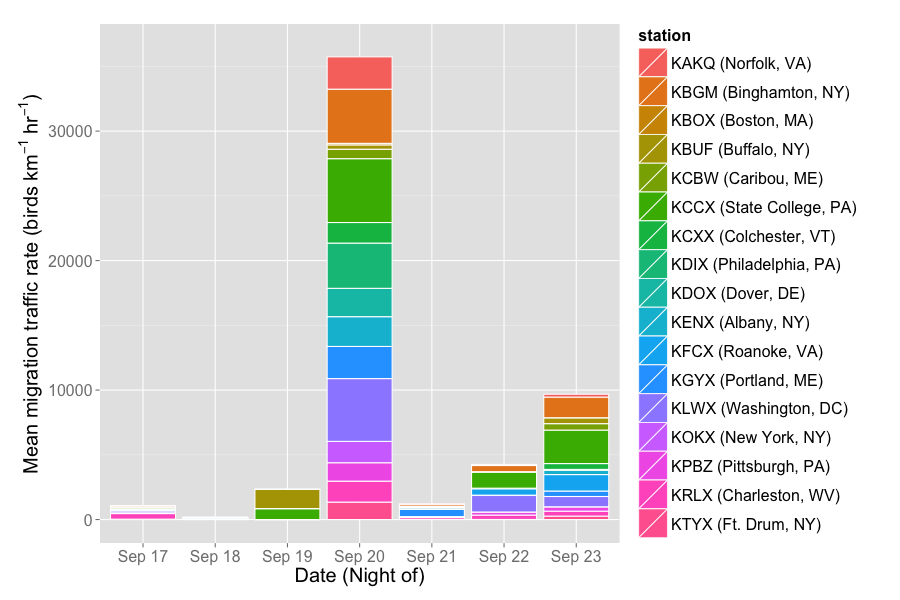 Migration over the last three weeks

Looking back over the last three weeks, we see a cyclical pattern of several nights of little migration followed by much heavier movements. These cycles (or pulses) correspond to prevailing weather patterns, with unfavorable periods of southerly winds (and low migration traffic) interrupted by favorable northerly flow (high traffic) — when this happens, birds clearly take advantage. 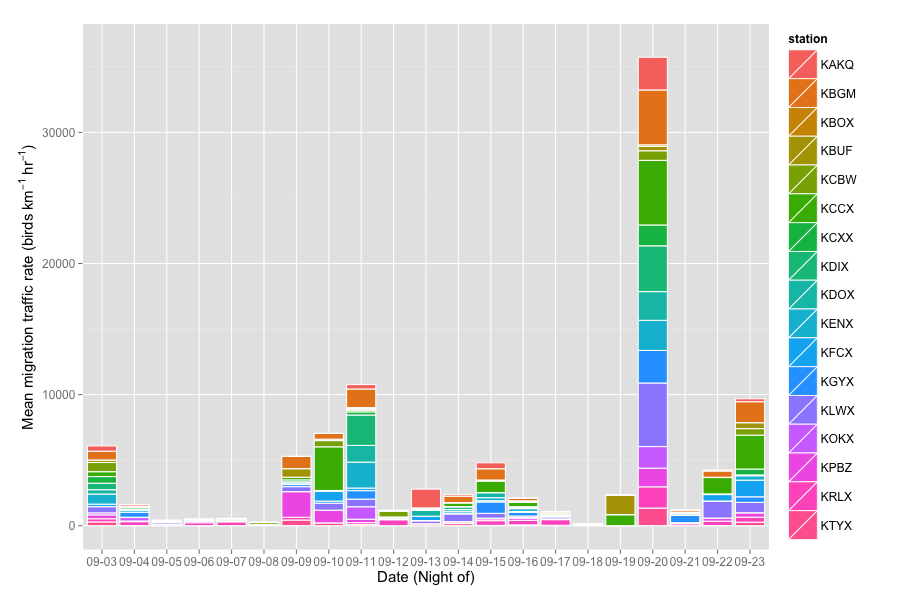 Little to no migration traffic occurred on the night of Friday, September 18. The numbers show our estimate of “Traffic Rate,” the number of birds migrating over a 1 km line each hour. Arrows show the direction and speed (arrow length) of movement.

However, the floodgates really opened on Sunday night.

Migration intensity was generally moderate across the region on Wednesday night.