Update, 23 April 2020. A large morning flight occurred at Angeles National Forest, again from Dr. Ryan Terrill, and numerous addition observers at Bear Divide, Angeles National Forest in Los Angeles County. This morning’s flight was of the same order of magnitude, but larger, detailed in this eBird checklist! Radar imagery from the nocturnal hours is available from the Live Migration Maps page, including this image from 11:10 PT showing the migration traffic and direction. 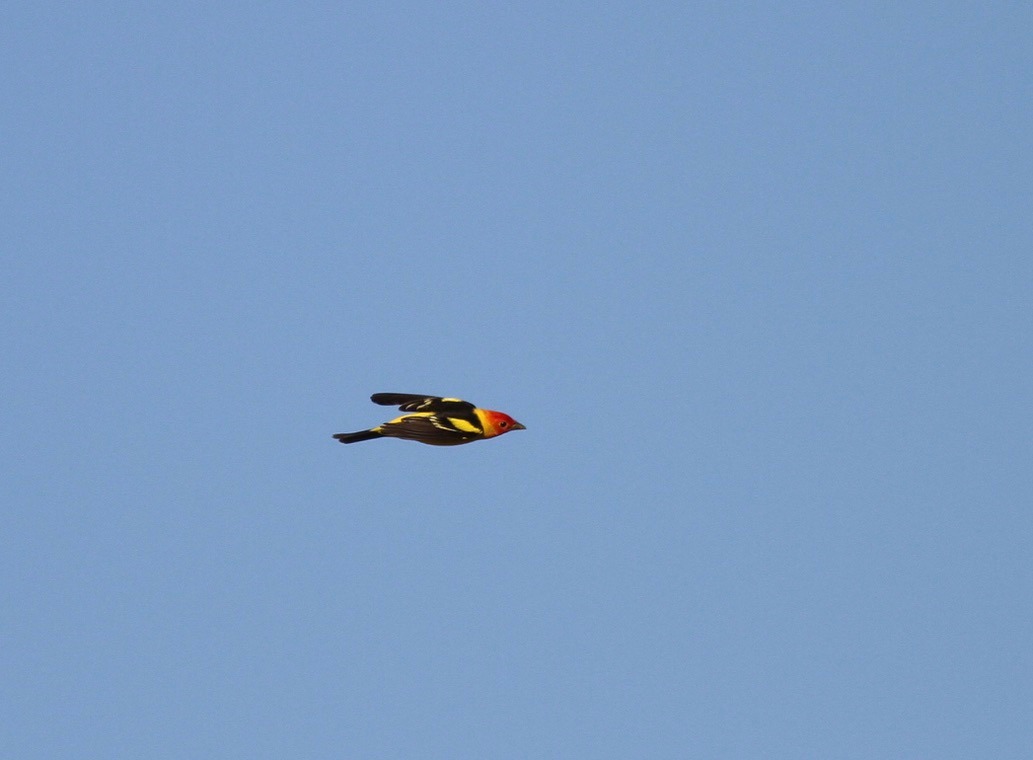 An exciting migration event unfolded on Wednesday morning in Southern California, as many thousands of birds continued their nocturnal movements well into the first hours of day light. These morning flights (check out some research on this subject) can be spectacular, highlighting at least some representation of the usually unseen magnitudes of bird movements that typically we miss because they occur under the cover of darkness. Weather, topography, and geography can define these flights, as can the previous night’s migration intensity.

If we look at the Live Migration Maps from 21-22 April 2020, we can see that a medium intensity movement directed generally to the northwest is apparent for much of the night in Southern California. Note that in some areas the movements continue after sunrise (i.e. when the yellow terminator pass in the animation).

Here are some of the nocturnal migration traffic rates in birds per night per kilometer as calculated by Dr. Adriaan Dokter using bioRad (a software package to analyze and visualize biological signals in weather radar data):

The coastal influence is strong, especially in San Diego and Los Angeles. We can look in greater detail at the altitudinal distribution of this flight, and the directions, speeds, density, and migration traffic rates of the bird movements. In the upper panel of each image in the slideshow, you will see a density of birds per cubic kilometer, with darker values representing more birds. You will see the time scale for the night on the x-axis, in UTC (Pacific Time+7 hours). Also notice the “barbs,” with the flags representing speed (one flag is 10 meters per second) and the point of the barb representing the direction toward which birds are moving. In the lower panel, you will find the migration traffic rate, which depends upon bird density and migration ground speed (most recently described here).

A pattern emerges for California stations, particularly so for Los Angeles and San Diego exhibiting medium to high intensities of birds for much of the night (especially in the case of San Diego). Furthermore, these birds are moving well to the northwest and west depending on altitude, following some similar patterns we discussed earlier in the week. Note that in Yuma, medium intensities of birds are moving at low altitudes and mostly prior to midnight.

Reports of the flight today come from two source at present, though we will be updating this post as we receive additional information. From Dr. Ryan Terrill, at Bear Divide, Angeles National Forest in Los Angeles County, comes an incredible report of perhaps 10,000 birds in morning flight, including additional documentation in the following video and photographs. In the video below, if you watch carefully, you will see numerous passerines (songbirds) passing through the frame.

From Paul Lehman, at Mount Soledad Natural Park in San Diego County, comes the following report (also very briefly summarized here): “Given the building high pressure and wind shift to the northeast overnight and early this morning, light at first (5-10 mph), then slightly stronger (still under 15 mph) and N as the morning went on, we figured there was the potential for an excellent morning flight. Mount Soledad in La Jolla seemed to be the right place to be, as we totaled ca. 1500 migrants passing by between 6:10-9:10 AM (and smaller numbers were still passing by at 9:15 when I departed) . . . ”