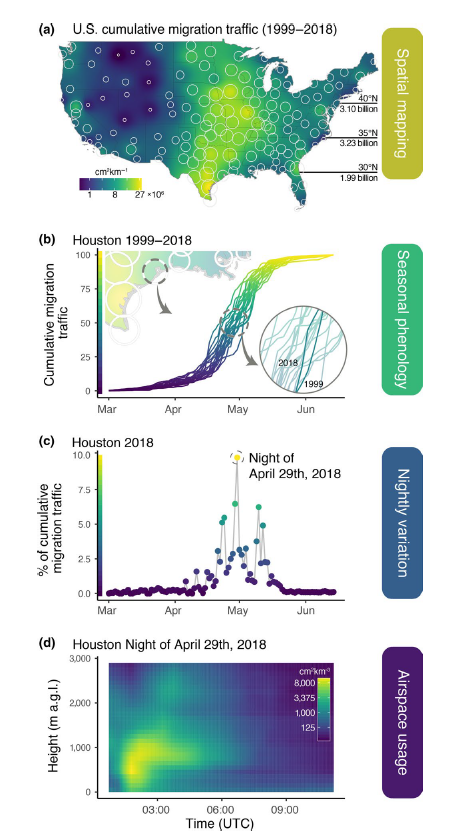 From reading our posts about bird migration and radar, you know that on many evenings during spring and fall migrations, tens of millions of birds take flight at sunset. You will also remember that these flights have been recorded for over two decades by the National Weather Services’ network of radars. This massive amount of information—over 200 million images and hundreds of terabytes of data—had been difficult to manage and analyze, until recently, when our collaborators at University of Massachusetts Amherst and the BirdCast team, among others, developed a machine learning system “to remove the rain and keep the birds.” Today, with this publication, we unveil a new tool “MistNet.” This is the “latest and greatest in machine learning” to extract bird data from the radar record and to take advantage of the treasure trove of bird migration information in the decades-long radar data archives. The tool’s name refers to the fine, almost invisible, “mist nets” that ornithologists use to capture migratory songbirds and the fact that the tool removes rain (and other meteorological phenomena). MistNet can “automate processing of a massive data set that has measured bird migration over the continental U.S. for over two decades,” says Dan Sheldon, our long-time BirdCast collaborator at University of Massachusetts and the co-senior author for this study. “This is a really important advance. It allows us to go from limited 20th-century insights to 21st-century knowledge and conservation action.” You can find additional details about the paper here.

28 August 2019. Adapted from a press release by University of Massachusetts Amherst.