Missing the mark: a brief discussion of migration in northeastern North America associated with a strong frontal passage

The period from 19-22 April 2019 provides yet another example of a strong frontal boundary crossing the eastern US carrying birds far beyond those that their intended destinations. This pattern has several names, but it is often referred to as a “slingshot” or “overshoot” event (check out one of a number of articles describing associated phenomena). The general idea: a strong low pressure system and an associated frontal boundary entrain birds that are migrating in southerly winds that precede the eastward movement of the front, particularly birds that are over water e.g. transiting the Gulf of Mexico or to the east or south of Florida; as the low pressure system continues east and eventually reaches the Atlantic Coast, entrained birds are forced offshore, where they fly downwind (e.g. to the north in strong southerly winds); and birds continue flying until they can orient to return to land (e.g. when their tailwind support decreases or when they reach a landmass). In this way, the low pressure system effectively transports them like a slingshot would launch a projectile (though not necessarily aimed accurately or precisely), with birds arriving to areas beyond their intended destinations.

Such a scenario is visible below in six synoptic weather maps. A cold front (blue line with triangles) stretches from the Great Lakes to the Gulf of Mexico on Thursday evening 18 April (slide 1), while a warm front is in position over New York and northern New Jersey. Winds to the east of the cold front and south of the warm front are southerly, facilitating a nice exodus of migrants. By Friday evening (slide 3) the low pressure center associated with this frontal boundary sites in the central Appalachians, and some portions of the frontal boundary are already close to the Atlantic Coast. By Saturday evening (slide 5), as the low shifted farther north, the frontal boundary bowed far into the Atlantic, with southerly winds ahead of it and presumably numbers of birds flying downwind (e.g. to the north). The location and timing of this passage is indicative that at least some of the entrained birds that appeared later in northeastern North America as part of the slingshot were entrained perhaps at the southern terminus of the frontal boundary on Friday evening.

Looking at a particular species and its distribution relative to this frontal passage may be informative. Summer Tanager is a useful example, as it’s breeding range, here in yellow, does not typically extend much farther north along the Atlantic Coast than southern New Jersey. 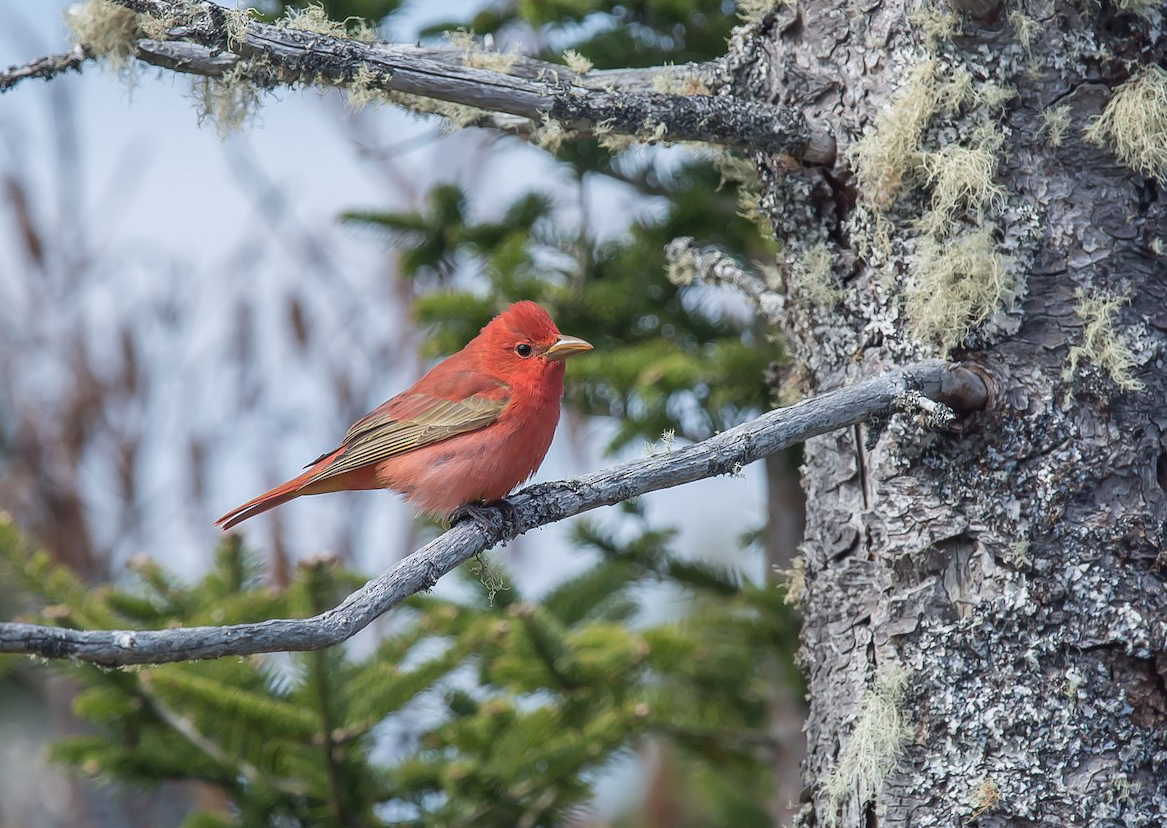 The figure below shows observations of this species in North America from 2 April to 2 May. Each bubble is an observation, with bubble size scaled to the number of individual Summer Tanagers reported and bubble color from earlier (yellows) to later (purples) date. The intriguing window of time to watch is in the April 17-22 window, when the figure pauses momentarily to highlight with text and arrows the distribution of tanagers to come in the coastal Northeastern US. Note, arrows are for highlighting only, they do not represent the direction of wind described previously.

Some additional striking examples of this can be found in the interactive maps below, in particular for Blue Grosbeak (and Indigo Bunting, here). 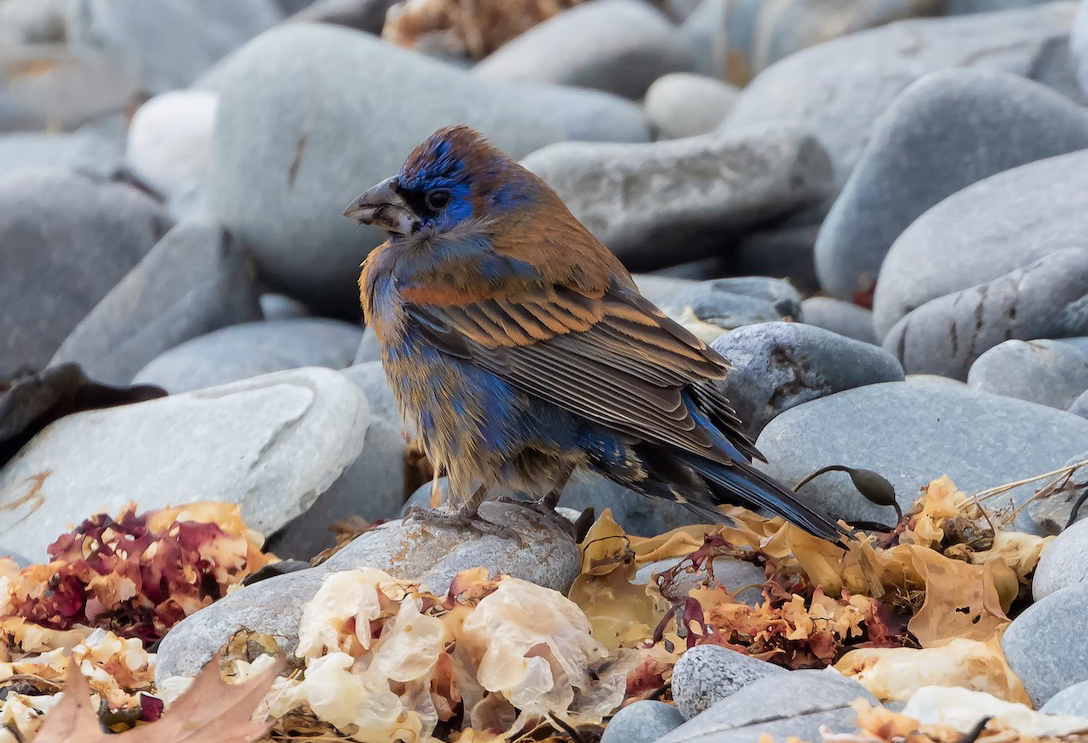 Using the slider, you can examine the distribution of observations before, during, and after the passage of the frontal boundary in the 19-21 April window.

Among warblers on the move with this system, Yellow-throated Warbler was certainly well represented. 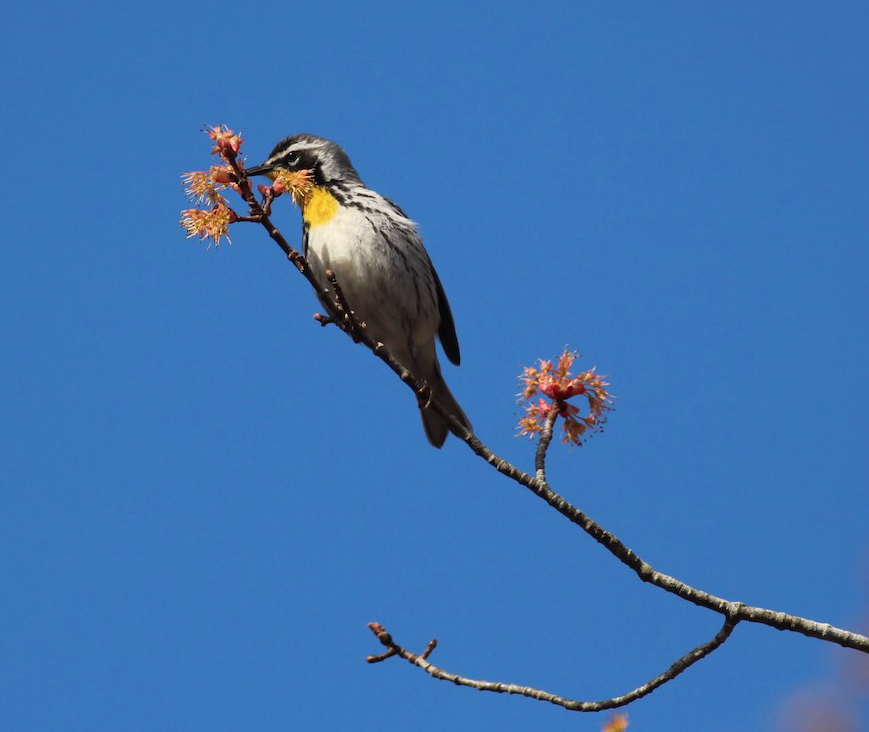 Perhaps more interesting was the occurrence of early Bay-breasted Warblers. Careful review of the timing of occurrences for these species and the progression of the frontal boundary suggests that perhaps multiple overshoot events may be hidden in what appears to be a singular occurrence. Given the intense and unpredictable weather occurring during this period, and frankly typical of April, such a scenario is probably not surprising. One other interesting aspect of this series of events surrounding the passage of this front is that some typical overshoot species that are frequent in such events, like Kentucky Warbler and Prothonotary Warbler, were not well represented in coastal New England and Maritime Canada.

The species composition of this event warrants further analysis, and characterizing it presumably holds clues to aid in identifying origins of birds that did overshoot their destinations into northeastern North America.