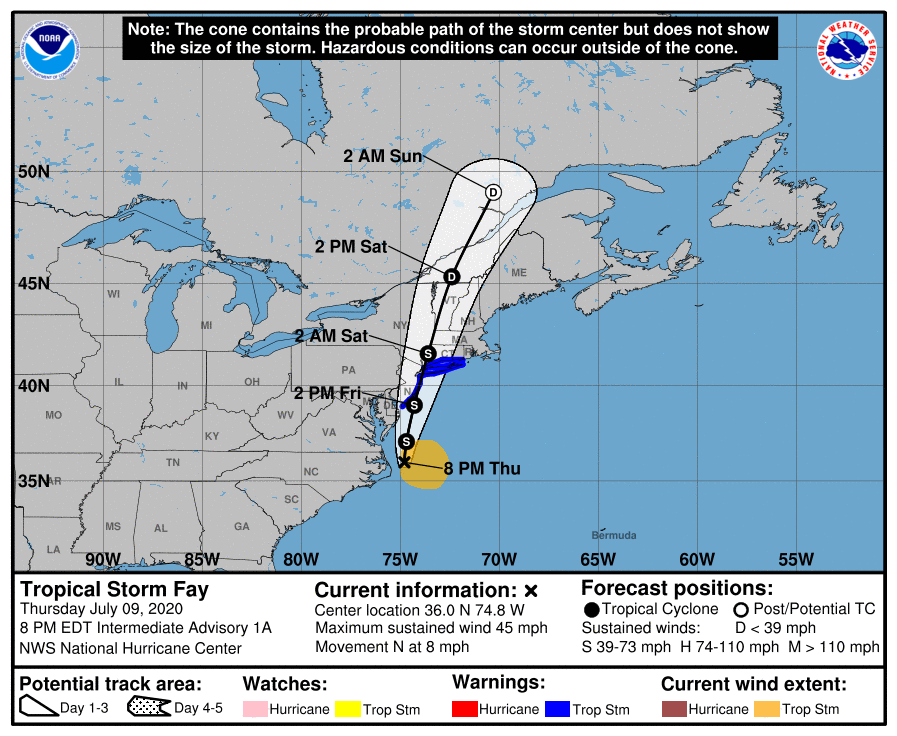 Tropical Storm Fay is a fast moving tropical storm forecast to move through the mid Atlantic states, near shore past New Jersey, and up the Hudson River Valley in the coming 48 hours. Similar timed tropical systems in the past, for example Tropical Storm Bertha in 1996, produced a number of interesting (and expected) entrained and displaced pelagic species (see this Chesapeake Bay Bridge Tunnel list). Of course, as with many previous Atlantic and Gulf of Mexico cyclones that we have discussed, Sooty Tern and Bridled Tern should (and will) be foremost in observers’ minds. This is especially true for those people that can safely (socially distancing and minding the dangers of passing tropical systems) view coastal stretches from DelMarVa, north to Sandy Hook, NJ and east along the south shore of Long Island (at least to Nassau County depending on the storm’s track), as well as river views of the Hudson Valley. This latter viewing opportunity may be the most intriguing, given what occurred when a tropical system traveled a similar path in the not too distant past (Irene). Additionally, observers in the Lake Champlain and St Lawrence River areas should be watchful for storm-entrained, displaced, and downed birds. These may include additional species beyond the typical warm water seabirds, such as high altitude overland migrant shorebirds and water birds downed by weather.