Today, we spotlight a potential fallout scenario in the Gulf of Mexico region. The featured actors in this scenario – increasingly intense trans-Gulf migration from northern Central and South America moving in favorable southerly winds and a cold front with precipitation marching east from the Rockies into the eastern US. Below, we have weather forecast maps for the coming 48 hours as well as our bird migration forecast maps to examine the situation in a little more detail.

First, let’s look at the weather forecast. A strong low pressure center (e.g the “L” on the map) moving from the central Great Plains into the Ohio River Valley from Friday through Sunday is associated with a significant boundary between air masses, represented as a cold front on this map with a blue line with blue triangles.

As the frontal boundary reaches the coast of Texas early Saturday morning, winds ahead of the front are southerly and favorable for migration and behind the front with shift to northerly directions. This shift, and the forecast precipitation for coastal areas and the Gulf of Mexico, are the typical and primary ingredients for coastal fallouts – birds in transit over the Gulf of Mexico encounter conditions like these that inhibit their forward progress and force them to seek the closest available habitat for shelter and refueling. In the next 12-24 hours, the front continues to push to the east, and with it the zone of unfavorable migration conditions that could induce fallouts moves east as well.

Let’s look at the bird migration forecast. The first medium to locally high intensity migration is forecast to occur in Texas on Friday night (13-14 April), in conditions that are generally quite favorable for migration. Southerly winds will prevail in many areas, including over the Gulf of Mexico (see maps above) albeit not terribly strong. Much of the east, in fact, will experience medium intensity migration on this night. You also may notice that the low pressure center from the weather maps appears on our migration maps outlined in white and gray. And some of the heavy precipitation forecast is also apparent. 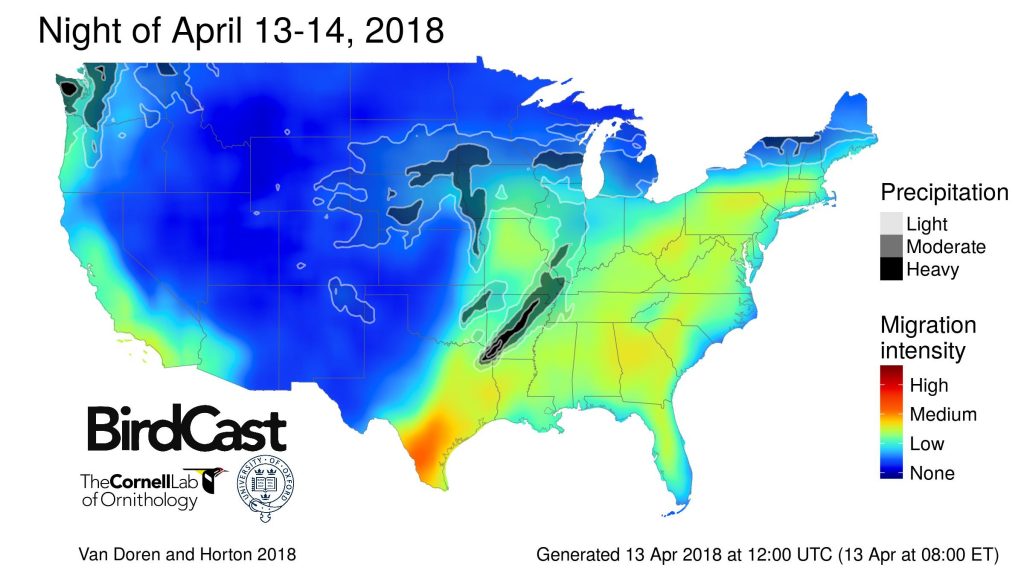 By Saturday (14-15 April) that heavy rain associated with the frontal boundary has clearly intensified, organized, and shifted east, and with it comes the potential we mentioned above for fallouts. Much of the central and upper Texas coast and western Louisiana will be in the fallout zone. Given the forecast for low wind speeds aloft over the Gulf of Mexico, concentrations of birds may not be immediately apparent until late in the day or even Sunday morning. Notice how migration is shut down behind the frontal boundary and low pressure system, with little or no migration forecast in the cold front’s wake. 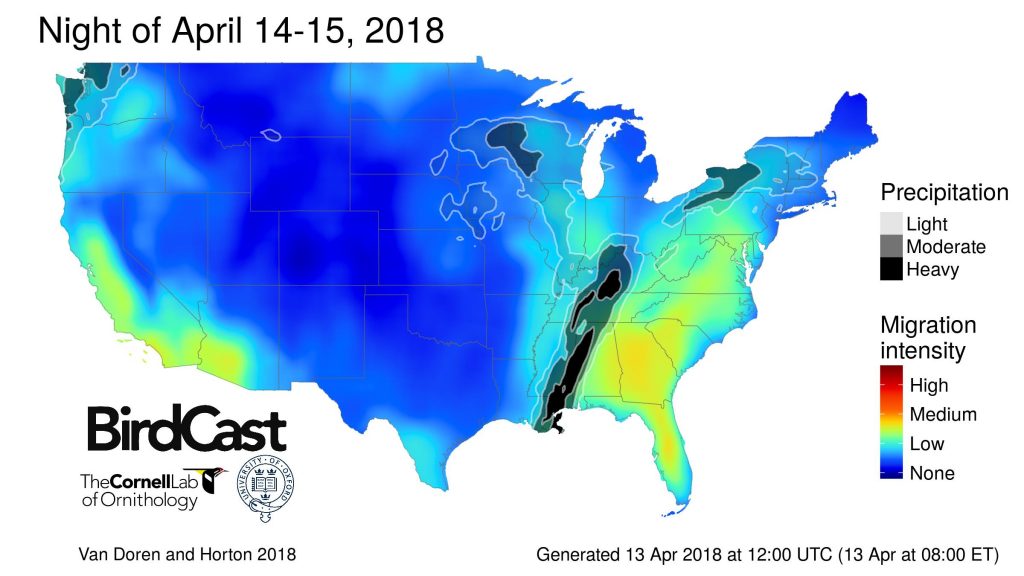 By Sunday (15-16 April) the frontal boundary has moved to the Appalachians, creating a broad area of unfavorable conditions in its wake spanning from the western Appalachians west into the Great Plains. Cooler temperatures and northerly winds will keep most birds grounded in these areas. Note that some locally more intense flights are still forecast in the Northeast and in particular in Florida, where additional local concentrations may occur where precipitation and birds overlap.

Along the Gulf Coast, whatever has arrived is generally staying put with the exception of central and south Texas. Sunday’s action is primarily in the eastern Gulf, particularly the Florida Panhandle, but also anywhere east of the Mississippi River. Some of the migrants over the Gulf that encounter this system may not arrive until late Sunday night, suggesting that even Monday may have newly arrived and probably semi or fully exhausted migrants to see in coastal habitat. 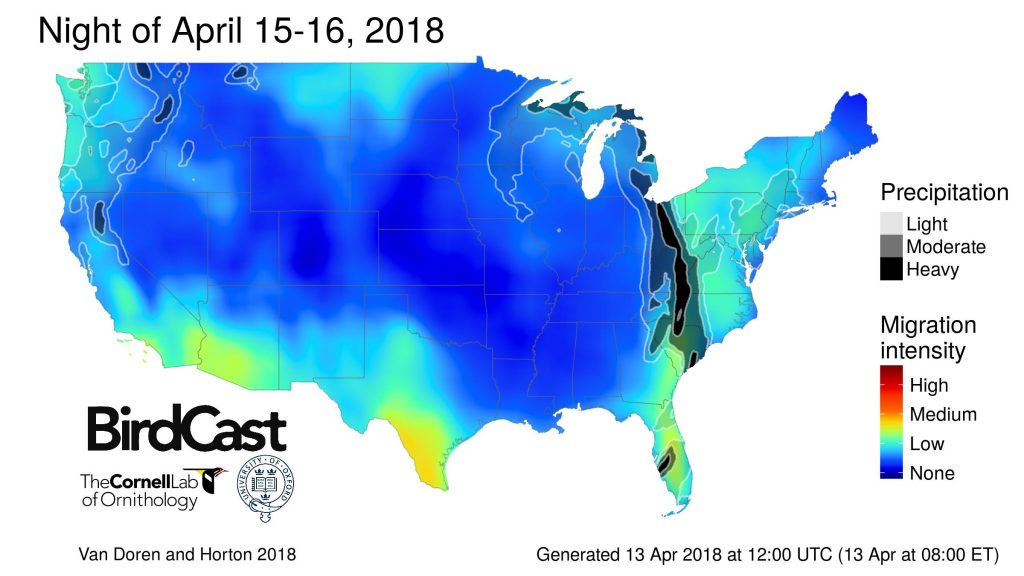 To summarize, a strong cold front will move through the central US and bring precipitation and northerly winds to the Gulf of Mexico region. These factors are typically associated with coastal fallouts in many different habitats. Saturday and Sunday will be the primary fallout potential in the western Gulf region, whereas Sunday and Monday will be that potential in the east Gulf region.

Please get out there and tell us what you are seeing, visiting @DrBirdCast and eBird to tell us about your observations! 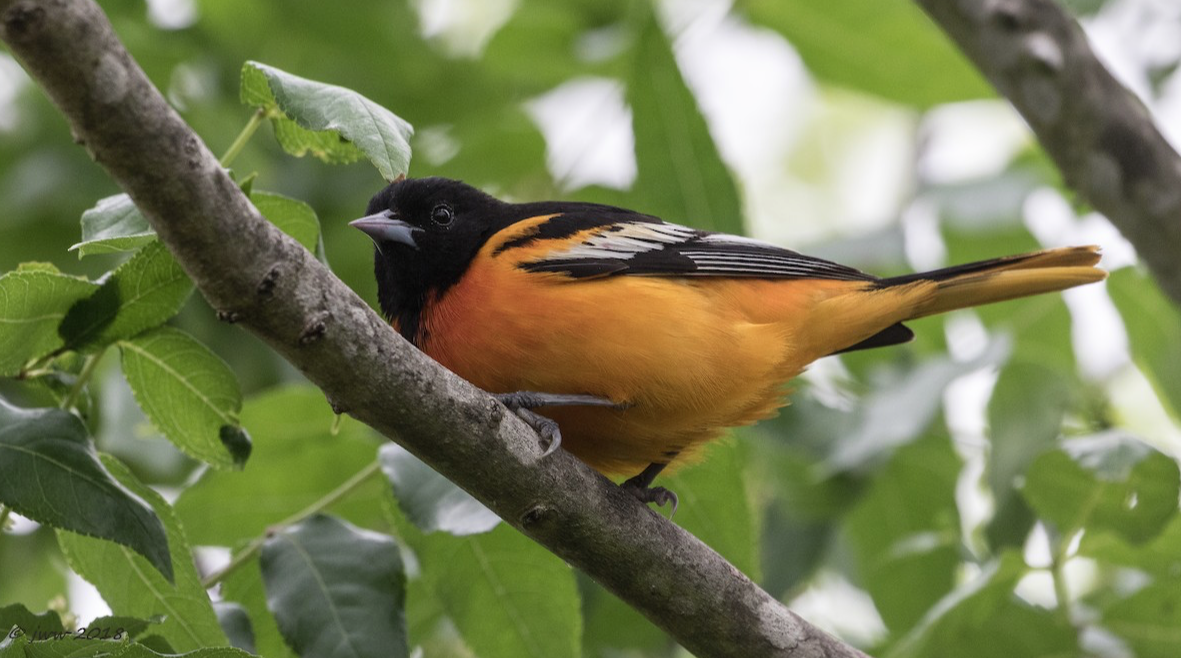 For those that read on after the main feature ends . . . you are in luck. Here’s a table of the species on the move that you might expect to arrive in this potential fallout scenario: