White-tailed Tropicbird may be displaced by the passage of Irma. Photo by Frantz Delcroix/Macaulay Library

IMPORTANT: If you are in the path of this devastating and dangerous storm, heed all forecasts and warnings from the National Hurricane Center (NHC). Remember also that strong winds are just one of the dangers, but that the risk of flooding is an equal or greater danger. NEVER put yourself in a situation where rising water may cut off escape routes or force you to cross deep water in your car.***Always put safety before birding.***

Hurricane Irma has transported numerous species of birds far from their normal haunts. Significant storms like this (for example, Irene in 2011, or Harvey last month) often trap (or ‘entrain’) birds in their circulation, depositing them far from where they originated. We still do not fully understand many of the mechanisms involved in birds getting ‘entrained’ and then deposited by storms, which is one reason why Team BirdCast (and many others) are interested in sightings associated with these storms.

These storms and the seabirds that they deposit can provide unique birding experiences and observations, respectively, with species that are normally hundreds of miles offshore flying over your inland yard, or turning up at your local reservoir. Real-time sightings from your eBird checklists will appear in the below map—read on to learn what to look for, and how to look.

The species displaced by these storms vary by the seasonal timing and geographic location of the storm. With a storm at this time of year that tracked from the open Atlantic through the Caribbean, you may encounter (if you can bird safely) displaced Magnificent Frigatebird, Bridled and Sooty Terns, White-tailed Tropicbird, Band-rumped Storm-Petrel, and other rare vagrants like Black-capped, Fea’s and Trindade Petrels and Red-billed Tropicbird. Magnificent Frigatebird and Sooty Tern in particular are likely to appear widely and be displaced in numbers in this storm. Check your small terns carefully for Roseate Tern: this species breeds widely in the Caribbean and is also on passage to South America now, so could get entrained by the storm and may mix with other Sterna terns like Forster’s and Common. Any jaeger is possible, but Long-tailed Jaeger may be especially likely since early September is near their peak migration time. With Irma we are not really expecting large shearwaters to appear inland, with the one exception possibly being Audubon’s Shearwater (which has been displaced in hurricanes, but is not especially prone to occurring inland even in strong storms). Although Cory’s Shearwater has featured in other fall hurricanes making landfall on the East Coast, we doubt it will feature in Irma. Our logic is primarily based on the incredible numbers of shearwaters along the northern Atlantic Coast this fall, and the distribution of these numbers not coinciding in space or time with the track of this storm. Check out this amazing list showing the recent concentrations around Cape Cod in Massachusetts!

The speed of the storm’s arrival and passage inland will determine to what extent other, more coastal birds like Royal Tern, Sandwich Tern, Least Tern, and Black Skimmer appear inland. Fast moving storms tend not to displace many of these species inland, but the numbers seem to increase as storms slow down which may tire out birds attempting to “weather” the storm. Keep an eye out for larger over-water migrants like Hudsonian Godwit and Whimbrel, which may be displaced westward by the storm’s winds. Waterfowl and other shorebirds are likely to be on the move in association with the storm, watch for species like Northern Pintail and a diversity of smaller shorebirds. Keep your eyes to the sky while checking local water bodies, since many high-altitude migrants may be “downed” by severe weather associated with the storm; such downed migrants may fly high over water, circling a few times before moving on (note, as a general rule, that many reasonably healthy birds deposited by storms move on very quickly after storms). The list includes Arctic Tern, Sabine’s Gull, various jaegers, as well as some of the previously mentioned shorebirds. 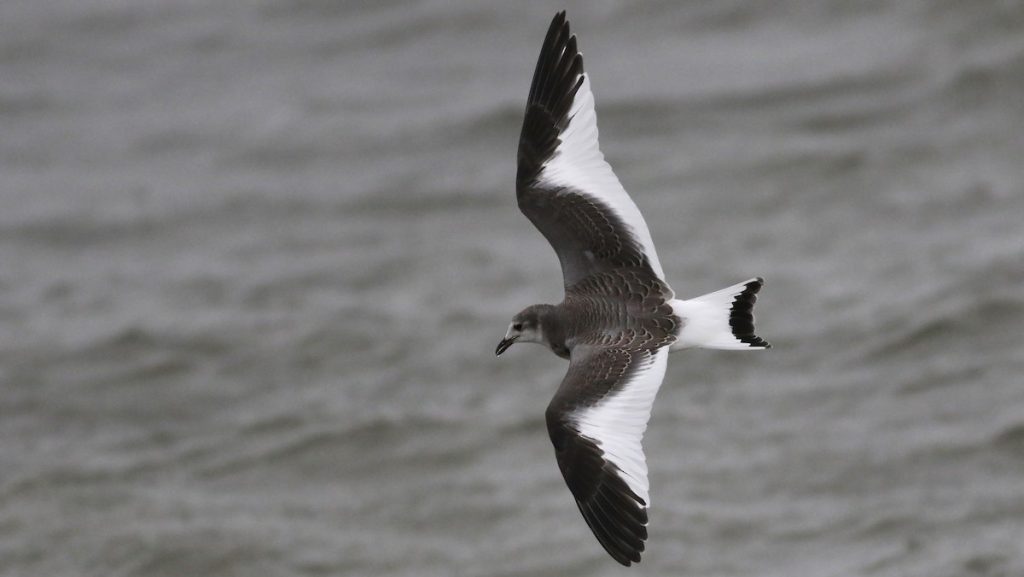 Some lucky observers may see Sabine’s Gull, a species that migrates in small numbers over land at high altitudes that may be “knocked down” by severe weather associated with Irma. Photo by Nick Bonomo/Macaulay Library.

The last potentially affected group to look for are aerial insectivores—swifts and swallows. This storm may produce Black Swift, as did Hurricane Irene with a documented, multiple observer sighting in Cape May and several additional reports of large dark swifts elsewhere in the Northeastern US. Be on the lookout in the period immediate after the passage of this storm and the days that follow for this species. Caribbean Martin is widespread in the Greater Antilles and still common now as they stage for migration (map). Check your martins carefully for one with a well-defined white belly: if it can be well-documented, you could find United States’ first confirmed record with this storm. Also watch for Cave Swallow, which has a fairly dark-throated and dark-rumped subspecies that is common on the Caribbean islands, and Bahama Swallow, which is uncommon but could be displaced by this storm.

The current path takes this storm over almost the entirety of Florida once it comes ashore. In the image below, updated 8am EDT on 9 September 2017, we see the projected five day track and cone of uncertainty surrounding this track (i.e., think of this as an area in which the center of the storm’s circulation could occur). 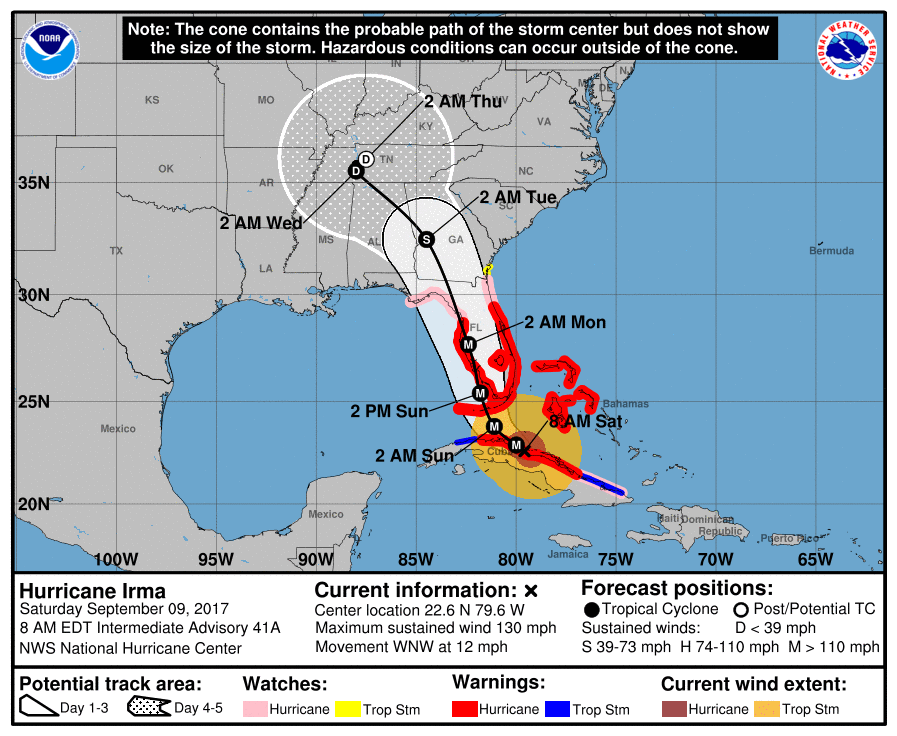 We do NOT recommend making any birding plans in Florida: the storm will make conditions too dangerous. With safety the absolute highest priority, birders that can see inland bodies of water in Georgia, western Alabama, and Tennessee may encounter significant numbers of hurricane-blown birds. Some areas of western South Carolina may also see storm birds. Areas east of the storm track are typically best. The storm could move birds well inland to the north, surely including north Georgia, Tennessee, and even Kentucky. Below are a few ideas, but almost any sizable reservoir or wide area on a river could be excellent. Note that birds often move along rivers in an attempt to return to the ocean, but that watching from a dam, natural wide area, or upstream side of a bridge can be ideal since birds may stall, circle, or stop when they reach obstructions.