As of June 9-10 Team BirdCast is calling spring 2020 a wrap. We would like to thank all of our supporters, readers, friends and colleagues, and promoters and detractors – I believe we can all safely say this was a spring like no other!

Our forecasts and live migration maps return on or about 10 August 2020. The close (or very nearly so) of spring bird migration and the combined dramatic decrease in birds and increase in insects are sending our maps packing for now. Let’s take a last look: 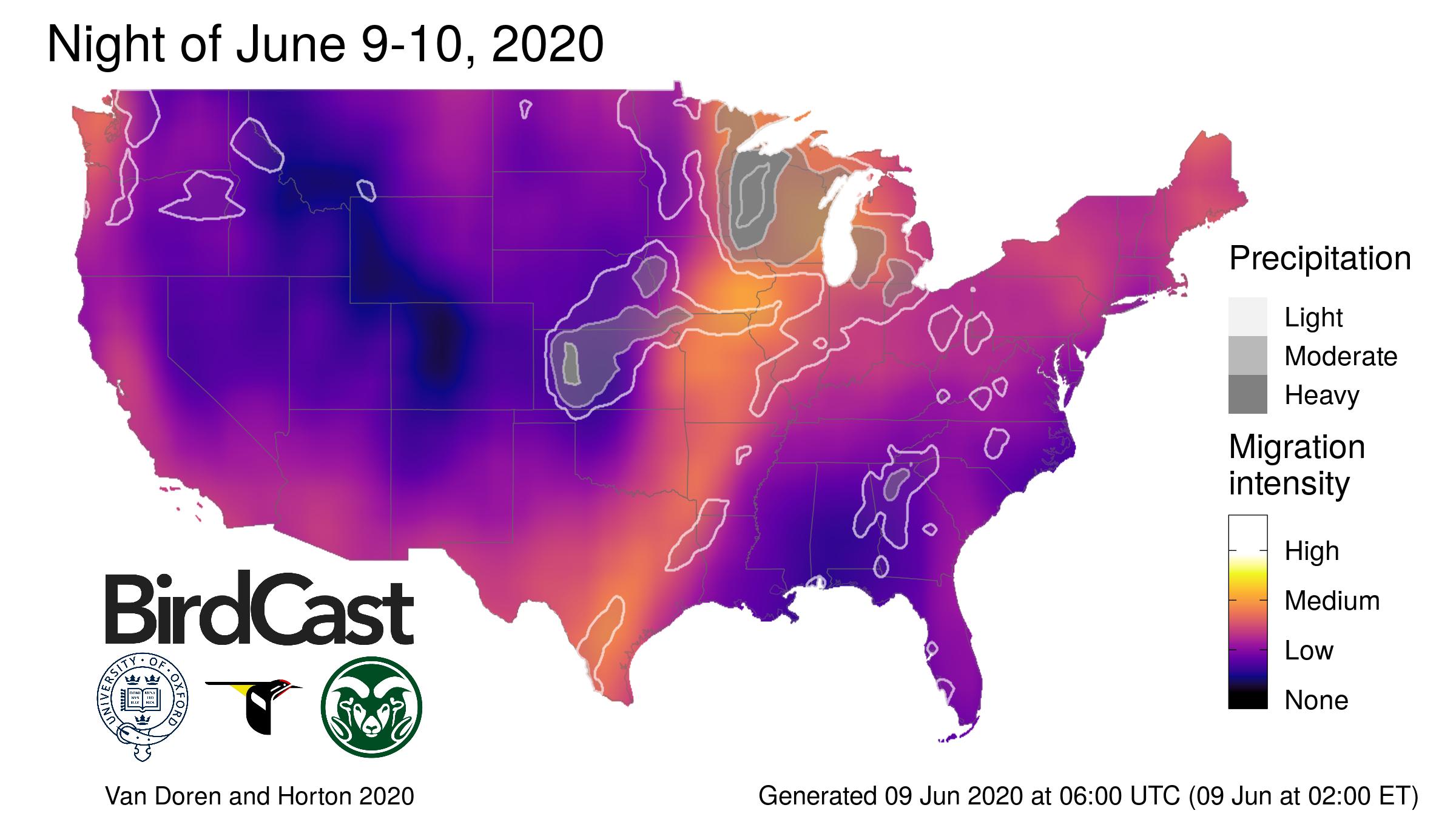 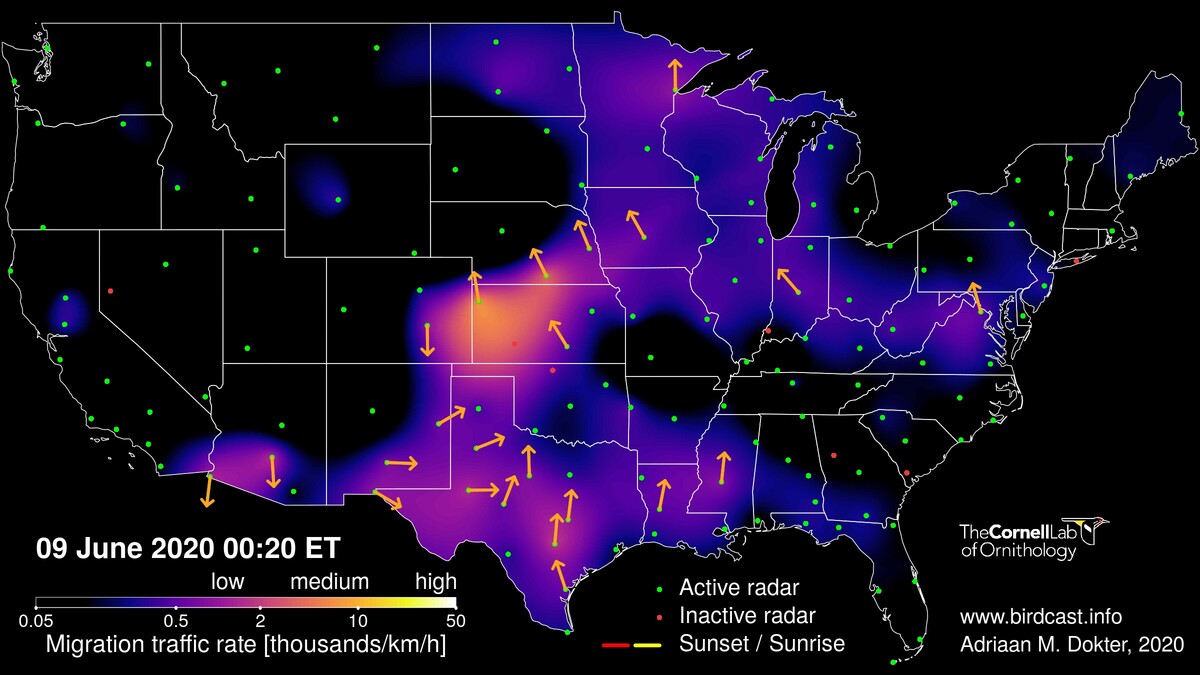 But all is not lost! In the coming months, we hope to follow several threads from stories we highlighted during the spring. Some of these stories might include the two below, and we may also delve further into patterns of vagrancy we saw earlier in the spring (e.g. a 20/20 hindsight review of appearances by Bristle-thighed Curlew, Fork-tailed Flycatcher, and Arctic Tern):

Kudos to the White Rabbit … one feature of this spring migration season, at least in the eastern US, was the apparent arrival delays for some groups of species. For example, Warbling Vireo, Yellow Warbler, Barn Swallow, Black-throated Green Warbler, Veery, and Scarlet Tanager were generally behind their typical schedules (see Yellow Warbler below, for example), in this case in Massachusetts. 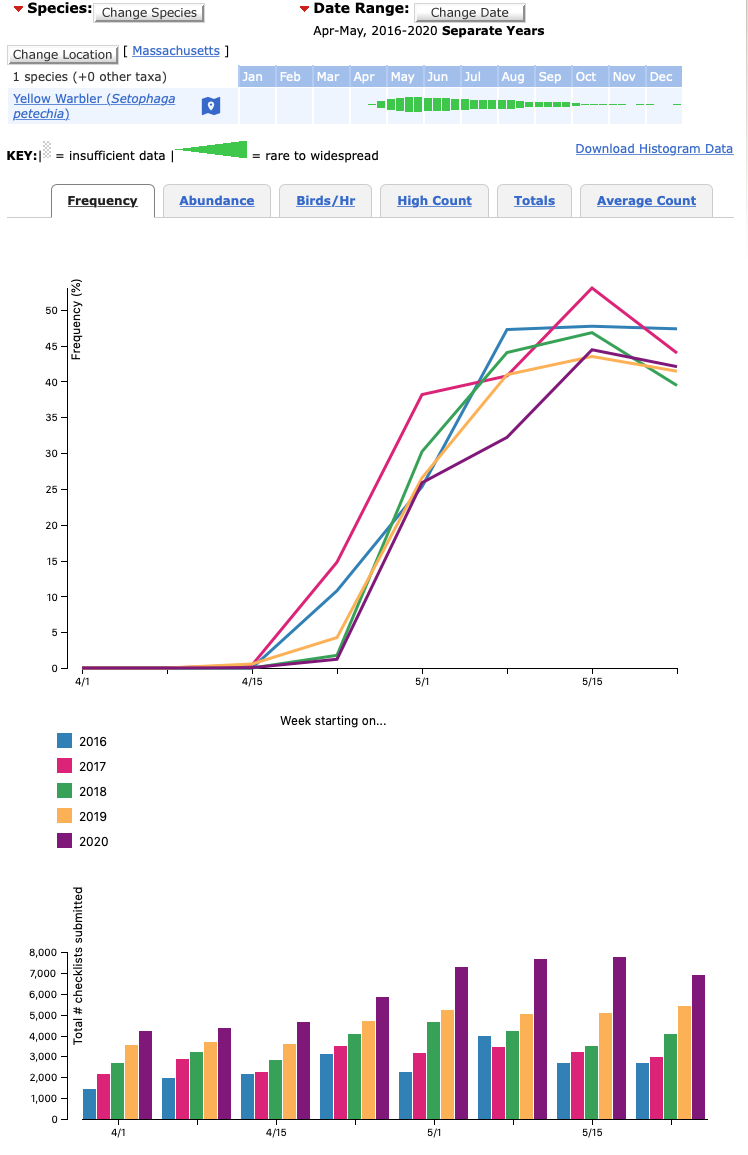 These “delays” may be thanks to a rather wet spring (rather than a Covid-driven factor, which given the numbers of checklists submitted seems not to be the case). Note, these are species that spend non-breeding winter periods primarily in Central or South America, and arrive into the US in spring via trans or circum-Gulf movements over the Gulf of Mexico.

Now, compare those patterns to patterns of arrivals of species spending non-breeding wintering periods in the southeastern US or Caribbean, for example Northern Parula, Black-throated Blue Warbler, Ovenbird, Black-and-white Warbler, Northern Waterthrush, and Baltimore Oriole. All of these species (e.g., Baltimore Oriole below) are closer to patterns during the past five years. 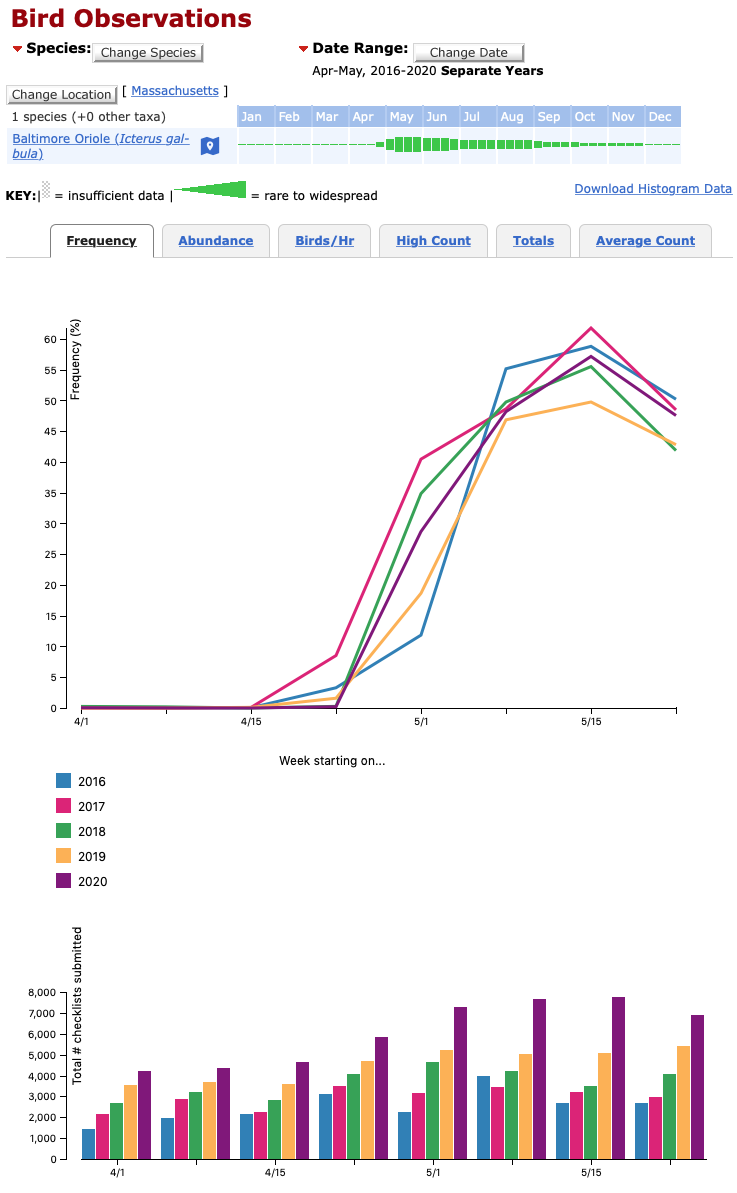 From this cursory examination and some of the general sentiment we have been hearing from the field, so to speak, weather presumably blocked some movements through Texas/Louisiana and over the Gulf of Mexico, but allowed movements through the Appalachians and up the East Coast (and as we have discussed this spring previously, over  water off the Atlantic coast). The Climate Prediction Center provides some insight for April 2020, highlighting below-average temperatures in portions of the northeastern U.S. and above-average precipitation in the southeastern and eastern U.S. This pattern was associated with anomalous northerly jet stream winds across western and central Canada, and with an enhanced subtropical jet stream across the southern U.S., contributing to below-average temperatures (northerly jet stream) and above-average precipitation and increased storminess (subtropical jet stream). Although these patterns are simply speculation at this point, we hope to investigate further in the coming months!

Spring 2020 was a season of many reports of morning flight. The BirdCast team posted about morning flights in California. We would also like to highlight this phenomenon as occurring elsewhere in the US, including regularly at Cape May, NJ as well as in other locations in Colorado, Washington, and California (see this amazing run of lists from 15, 22, 23, 24, 25, 26, 29 April and 1 and 3 May 2020). 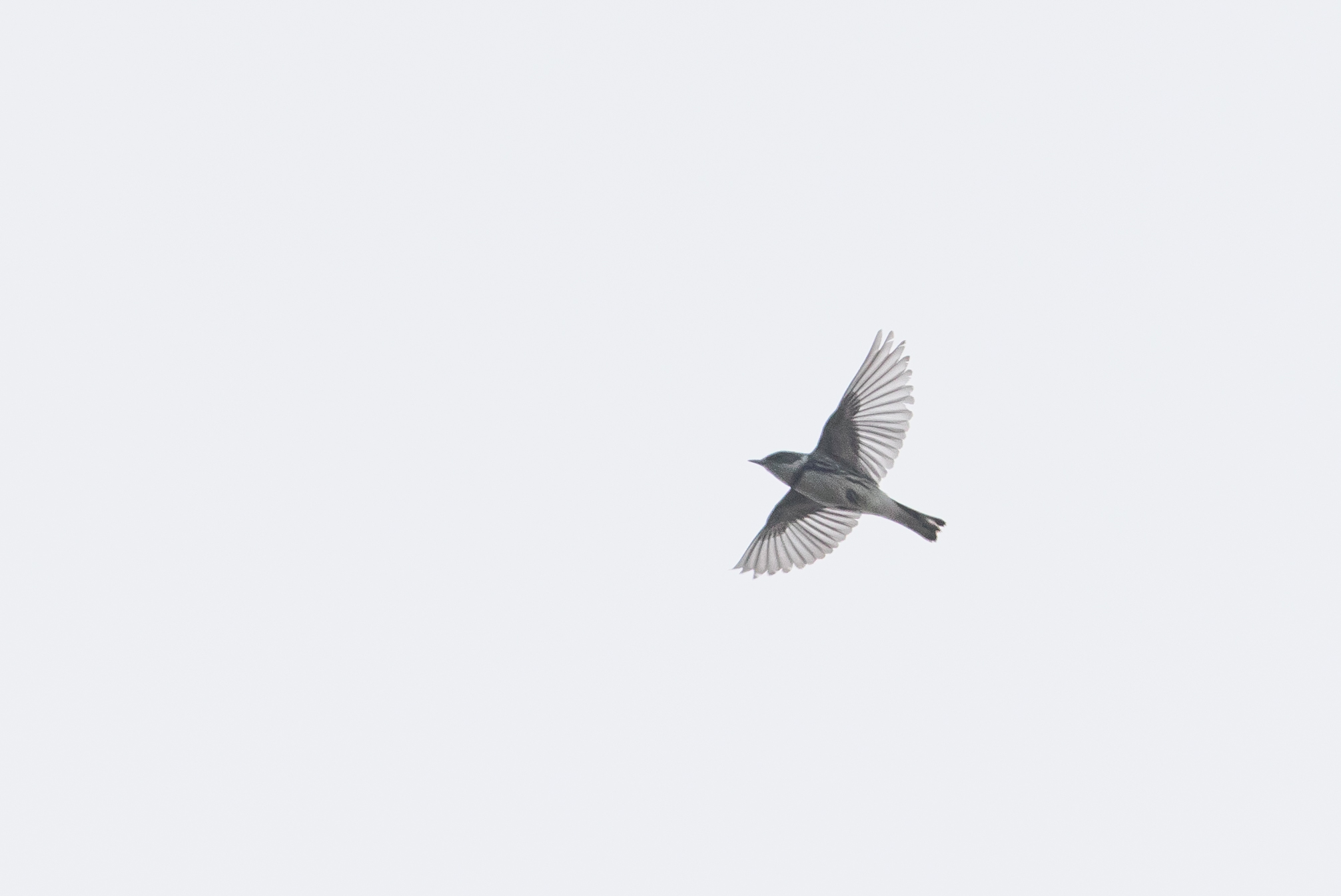 Our friend Paul Lehman commented on the phenomena in this posting, copied verbatim here because it is stated so well: “Bird News from Western North America” from the June 2020, Western Field Ornithologists electronic newsletter.

SPRING “MORNING FLIGHT:” The phenomenon of “morning flight” involving large numbers of passerine migrants is well known in some regions of North America, but it is poorly known in many others. On the Great Lakes and along the East Coast, many migrants displaced offshore during the night, often due to wind drift, beat their way back to shore and may continue moving along the shore or back inland—often into the wind—for several hours after dawn. Thus, much of such movement will be in a direction other than that intended for that season, as the birds re-orient and perhaps look for better quality foraging habitat. Along the East Coast, such flights are best developed during the fall and are studied at a number of well-watched sites between Quebec and Virginia. They do occur in spring as well. Morning flights are also known at several low passes through the Appalachian Mountains, particularly in West Virginia and western North Carolina, but in those examples the birds obviously have not been drifted out over the inhospitable ocean. It is such a funneling-through-canyons-and-passes phenomenon that is beginning to gain acclaim in spring in parts of California as well.

A large percentage of passerines wintering in Mexico and Central America likely arrive in California via western Sonora and the southern deserts, with some continuing north up the east side of the Sierra, and another large segment moving northwest, toward the western Sierra foothills and Coast Range, with some variable number ending up along the immediate coast (and offshore). One of the first serious looks at nocturnal and morning flights through funneling geography in California was a radar study that took place between 1980-1986 at San Gorgonio Pass/Coachella Valley (east of Riverside/San Bernardino), Cajon Pass (north of San Bernardino), and Tejon Pass (north of Los Angeles) (Robert McKernan, pers. comm.). But for most field birders in the state, their first introduction to large early-morning flights was probably the “discovery” later in the 1980s of Butterbredt Spring in eastern Kern County. Located on the southeast flank of the extreme southern Sierra Nevada, hundreds or even thousands of birds may move upslope in a single morning, via a funneling canyon, often staying very low as they fly into the dominant, and often strong, westerly spring headwinds. Other sites on the desert slope of the southern California mountains have since been shown to likewise host major spring flights of passerines, at least on occasion.

Fast forward to the 2010s, and to the discovery and increasing interest in documenting similar movements of birds in spring on ridges and through passes and canyons farther to the west. These flights typically last up to three hours after dawn, and sometimes they do not commence in earnest until a half-hour or so after sunrise. In southern California, from south to north, the sites receiving the most recent attention include Mount Soledad in San Diego County, Bear Divide near the western end of the San Gabriel Mountains in Los Angeles County, Romero Saddle to Refugio Canyon in the Santa Ynez Mountains of southern Santa Barbara County, and foothills behind Arroyo Grande, West Cuesta Ridge, and Cerro Alto Peak in San Luis Obispo County. Mount Soledad is the only one of the sites located along the immediate coast, so it may host an appreciable number of drift migrants that have returned to land from offshore. The other sites, all located farther inland (and Bear Divide much farther inland), presumably are used by birds that are not so “displaced.” At all of these locations, weather conditions are a major factor, with clearer skies and winds from between the north and east producing many of the best flights. Strong headwinds may be especially effective in keeping the birds low, and thus easier to see and count. But at all locations, the flights can be fickle and not always predicted correctly ahead of time. Over the past few years, Bear Divide has proven to be the grand-daddy of sites, with the most consistent and by far the largest totals, estimates sometimes exceeding 10,000 birds in a single morning. A more detailed article on that site is planned for the future (Ryan Terrill, pers. comm.).

In northern California, a similar phenomenon has been documented in recent years at a few passes in the Coast Range, such as Loma Prieta Saddle and Pacheco Pass in southern Santa Clara County. Most passerine migrants likely continue north through the East Bay foothills and Coast Ranges farther north (e.g., Napa County) rather than along the immediate coast. Steady west/northwest winds in spring are one factor that keep most large migrant pushes from the immediate coast on the San Francisco Peninsula and Marin County. Some of the San Francisco city hilltops can be very good on clear mornings with a noticeable offshore flow, but this is an atypical weather pattern here. Migrants presumably stay away from the immediate coast to avoid getting lost over the water, and coastal birders really do have to get lucky with the weather conditions to get a good flight in San Francisco (Dominik Mosur, pers. comm.). Farther to the north, such flights are especially rare along the Humboldt County coast, where the birds that do come through tend to be scarce migrants such as Hammond’s and Gray Flycatchers, Chipping Sparrow, Nashville Warbler, and Lazuli Bunting, along with vagrants—but there are no real waves of otherwise regionally common species (John Sterling, pers. comm.). Interior ridge-tops are the best places in the northwest California Coast Range for large numbers of birds. Canyons are usually fairly dead with just a few scattered migrants. In this region, there are also the issues of there being much more thick forest and one is so far west as to be beyond the main route of most northbound passerines. In the Central Valley, one can experience some good waves on the Valley floor, but they are spotty. One location can be dripping with migrants but another equally good location can be dead on the same day. Figuring out the daily hot-spots in the Valley is challenging and often frustrating (John Sterling, pers. comm.).

Farther north still, morning flights of passerines have been observed at a couple low passes through the Coast Range near Lincoln City, Oregon, and at Point No Point, Puget Sound, Washington. The latter site has been surveyed since 2003, where funneling birds moving up the Kitsap Peninsula are loathe to cross several miles of open water. North winds produce the most visible flights there, and like those in California, the morning movements last up to about three hours and may not commence on some days until almost an hour after dawn (Brad Waggoner, pers. comm.). Such flights obviously provide basic information on species’ timing and abundance. They can also separate the through-migrants from local resident individuals of the same species (e.g., Cassin’s Kingbirds, Hooded Orioles, Yellow Warblers), thus clarifying species’ migratory timing. And sizable flights of some waterbird species, such as Common Loon and Double-crested Cormorant, have been noted on occasion as well.