Speedy Zeta arrives in the US

Hurricane Zeta is powering toward the Louisiana coast, predicted to make landfall later today. This storm will certainly entrain Gulf of Mexico seabirds, as well as displacing some nearer shore species inland and dropping overland migrants. But as always with our posts about birding near and in passing tropical weather systems, remember that these storms are extremely dangerous: safety is always the top priority. 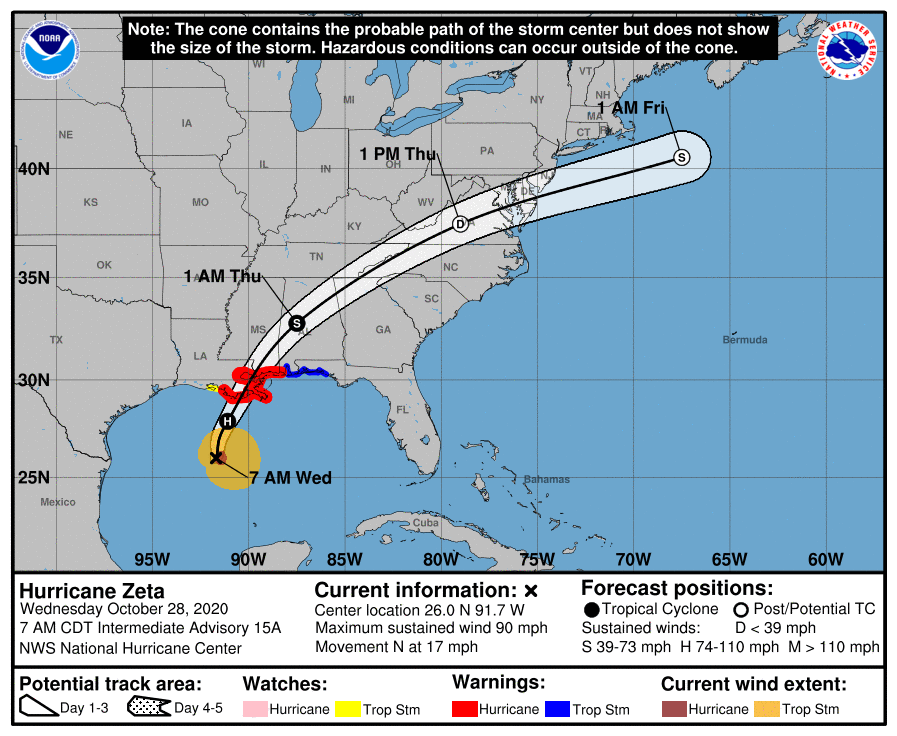 An array of Gulf of Mexico seabirds is possible with this storm, presumably as far inland as central Mississippi, eastern Tennessee, and northern Georgia. Based on current predictions, inland bodies of water in these areas have the highest likelihoods of entrained storm birds. The haul of birds should include Sooty Tern (almost as far as structured remnants of the storm persists), Bridled Tern (closer to the immediate coast), and Magnificent Frigatebird (numbers along the coast and just inland, with far inland sightings possible depending on the storm’s structure and speed), and rarer species like Black-capped Petrel may be possible (see this post regarding Hurricane Nate in 2017 for a species list). Concentrations of shorebirds will occur in coastal areas, and numerous overland migrants may drop with intense weather associated with the storm’s arrival farther inland (Pomarine Jaeger, Sabine’s Gull, Long-tailed Jaeger, Red and Red-necked Phalaropes, Dunlin).

Note that this is a fast moving system, forecast to make landfall, move quickly north and east during darkness, pass through the central Appalachians and mid Atlantic regions during daylight, and depart offshore into the Atlantic within 36 hours. So, even though the storm system weakens after landfall in Louisiana, the speed of the remnants of Zeta may facilitate the occurrence of entrained and displaced birds far to the north and east, perhaps as far as the central Appalachians and even the mid Atlantic states and southern New Jersey. Birders in all areas along the predicted track should be watchful during the day Thursday and possibly early morning Friday.

In addition to the usual assortment of hurricane entrained and displaced species, this storm system and its passage may bring Franklin’s Gulls and Cave Swallows (among other vagrants) to the northeastern US and mid Atlantic region. Furthermore, given the timing of this storm’s passage, birders may wish to refer to the species list and experiences regarding downed overland migrants associated with the passage of Hurricane/post Tropical Storm Sandy in 2012 (see a sample account here and in the BirdCast archives).