13-20 April was a period with substantially more exciting movements than previous weeks in the northeastern US. Substantial movements occurred on several nights, most notably 14-16 April. Inland flights dominated these movements, particularly in Ft. Drum, Binghamton, Buffalo, and Albany, NY, and State College, PA. Remember, traffic, specifically migration traffic rate in our case, is defined as the number of birds from 0-3,000 meters above radar stations moving hourly over a 1 km line drawn on the ground. 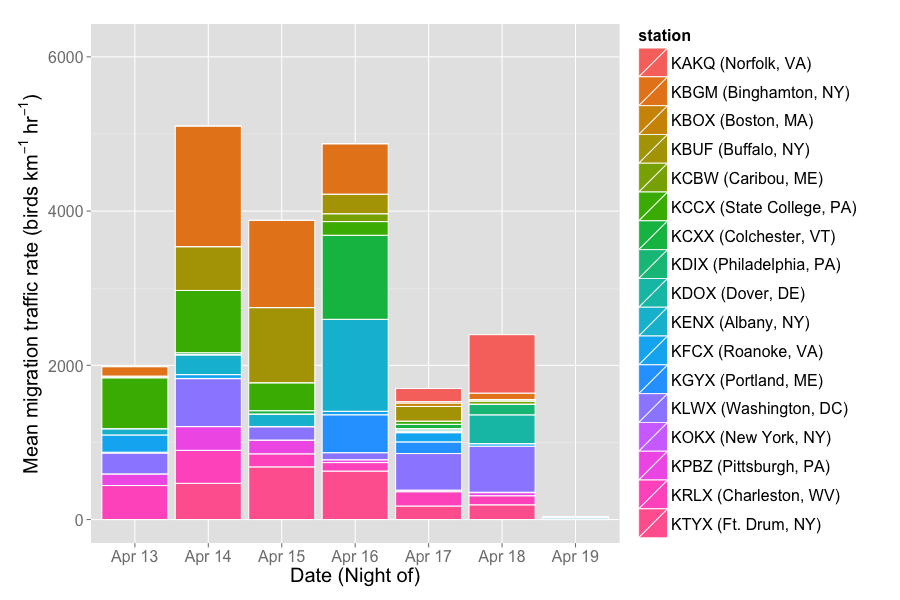 April saw an unseasonable blast of cool in the region. Lackluster movements characterized the migration scene in our previous report, but changes are afoot, clearly, in the current report. 14-16 April highlighted the peaks of movements from a regional perspective. In particular, 14 April saw the first substantial and widespread flight of the spring, with many inland stations participating. Most birds were moving in a northerly or northeasterly direction, with the largest flights over central New York. Note that coastal locations generally did not participate in this suite of movements.

Similarly, 16 April saw similarly widespread flights, but with a more northerly distribution. Most movements were primarily oriented toward the northeast. Note, also, that Maine experienced flights part of the movements in the northern half of the region.

Coastal flights were generally muted during this period because of persistent easterly flow associated with a strong blocking high pressure center in the North Atlantic. And remember in both of these cases, our model is not perfect, and some of these detections may be erroneous classifications of precipitation as birds.